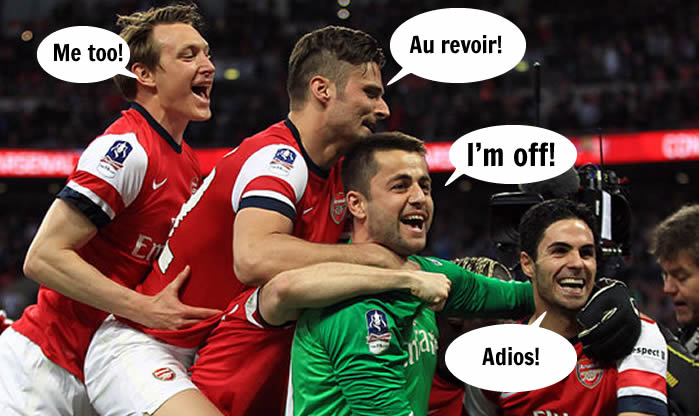 The first definitive ‘transfer’ of the summer looks to be in motion, albeit it’s a player leaving rather than one coming in.

The club have announced that Lukasz Fabianski has signed a pre-contract agreement with Swansea City and will join the Welsh side when his contract with us expires at the end of June. It seems like a decent move for him and it’s interesting to see him stay in the Premier League. I’d have thought there’d be plenty of interest from abroad too.

While I’m delighted for us, and by extension him, that his Arsenal career ended on such a high note, I do wonder if there’s been a touch of revisionism about his time overall. Arsene Wenger always spoke extremely highly of his talent and Wojciech Szczesny told James from Gunnerblog that Fabianski had been crucial in his development as a young keeper:

Lukasz has been fantastic. We’ve known each other for such a long time. I used to look at him like a hero. He was technically pretty much perfect—and still is.

And when he became number 1:

I even found that every time he was fit, my game was much better. Obviously he’s had his injury problems as well, but I’m 24 now and I watch him train now and I still learn a lot from him even though I’m No. 1. I’ve benefited from competing with him a lot.

But for all the technical excellence and talent, he was a man who, for a long time, struggled to bring what he did on the training ground to the pitch. There were mistakes, lots of mistakes, some of them quite ridiculous, and until the last couple of seasons his name was not one synonymous with good goalkeeping. Perhaps it was a little unfair, but he definitely had an issue with pressure of performing consistently.

I know he had some time out through injury, which obviously gave him time to reassess his game (as Arsene Wenger talks about here), but I don’t think it’s any real coincidence that his best spell at the club came when he was very obviously second choice, and when the expectation wasn’t so high.

In seven years at the club he made 78 appearances, not exactly a huge amount, and when you consider he was ‘competing’ with Manuel Almunia for a good chunk of that time … well, it tells some kind of story. Since Szczesny’s emergence, Fabianski has been the second choice and provided good, stable back-up and competition. It’s a role which I think suited him here but maybe being number 1 at a club with slightly less pressure is one that will be good for him now.

He’s always been a decent, likable, honest pro and I genuinely wish him all the best, but at the same time it’s not like we’re losing a key player here. It does create an issue about how we replace him in the squad, and what kind of a goalkeeper we’re going to need. Keeping Szczesny on his toes is going to be important, obviously, but I just don’t see the manager spending a big chunk of his transfer budget on a keeper this summer.

Stories about a £15m for David Marshall and even £8m for John Ruddy seem fanciful to me. Surely that money could be better spent elsewhere. I think Szczesny has the potential to be one of the best keepers in Europe if he continues his progression, and his displays last season were underrated by many I think.

What exactly we do to boost our goalkeeping options was a point of discussion in yesterday’s Arsecast Extra. With the Invincibles in mind for obvious reasons, it’s worth remembering that season we had Graham Stack on the bench for the duration. A young keeper with little or no experience and we were fine. These days there’s a clamour for experienced quality back-up and experienced quality back-up for your back-up.

If you look around all the other clubs, there’s usually a serious gulf in quality between the first choice keeper and the number 2, and with our need for increased quality in other areas of the pitch, I can’t imagine we’re going to be spending a lot of money on a goalie this summer. Maybe somebody young with lots of potential from a smaller club, or a promotion from within. We might see a Poom-esque arrival to add some experience, who knows?

Good luck to Fabianski, thanks for the contribution to our FA Cup win this season and I’m genuinely happy for him that his career is back on track properly, even if it is elsewhere. But whatever happens, I’m comfortable with Szczesny as our number 1 for next season.

By the way, if you’re experiencing some issues with downloading the Arsecast Extra this week through iTunes, other apps, or the site itself, there is a small problem with our podcast server which we’re working to get fixed. In the meantime, you can always listen via Soundcloud and there is an option there to download the MP3 directly.

Finally, if you’re looking for a copy of the book, fear not. We still have some, but I’ve just taken it off-sale for a couple of days so we can a) get some postage supplies in and b) catch our breath a little. I’ll put it back on sale after the weekend!

Right, that’s yer lot for this morning. Tim Stillman’s column will be here later on, more from me tomorrow.