And so we have reached the end of this most peculiar and Arsenalistic of seasons.

We finished in our customary fourth. We must do better next term. But fourth and an FA Cup? MAKE US DREAM, MR. WINDSOR!

Let us move swiftly on to the forthcoming World Cup, or as I like to refer to it, the Brazilian Brouhaha.

Jacques qualifies to play for England under the Grandmere rule. His mother, Irene, was a coalminer in North Yorkshire. We all know the story. One summer’s day, she was enjoying her ninth pint of the evening when a travelling French accordion player, Marcel Wilshère, arrived at the pub. He began the first chords of Non, Je Ne Regrette Rien,  and Irene joined in. Unfortunately, she only knew the melody from the dirty version, no, I’ve got no knickers on, but somehow the duet worked, and as their eyes met over the line “I said watch out, the vicar might hear us“, it was amour at first sight. The next day Irene downed her coal hammer, protective helmet and reinforced steel toecapped boots and headed off with the dashing, lustful Frenchman to his rustic hovel just outside Marseille. A year later, they were blessed with un enfant, Jacques’ papa, Didier.

Alexander Oxlade-Chamberlain qualifies to play for England as he is English. He is so English, in fact, that he was born with a birthmark of a Saint George’s cross on his old chap. He emerged from his mother, the Duchess of Hampshire, singing Jerusalem. Although he was born into a wealthy, landed family, the Oxlade-Chamberlains of Hamble, whose family have owned much of that county since they annihilated the local population in the 13th century, young Master Oxlade-Chamberlain, or ‘The Young Lord’ as the servants know him, still possesses the common touch. Although he speaks with the most cut-glass of accents, he sports the massive, luscious sideboards, the luxuriant bugger grips of a Victorian gardener. His drink of choice when in public is Boadicea’s Most English and British Trafalgar Ale (3.5% ABV), recently voted Working Chaps’ Most English Ale of the Year. We hope young Master Oxlade-Chamberlain has consulted the diaries of his Great-Grandfather, Sir Cecil Oxlade-Chamberlain, an explorer. In the 19th century, he reached the most remote areas of South America and attempted to civilise them at first through gin and tonics, and then through the traditional Western method of cultural genocide. Cheers!

Sadly, Mr. Arkwright, although qualifying to play for the Spanish via his Grandfather, Juan Antonio, and England via birthright, has been picked by neither. Their loss.

Our English trio of Lucien Ponsonby, Lord Peregrine Meatlocker and Melvin Orwell all made the decision as juniors to play for The Fatherland, or in their respective cases The Grandmotherland, The Grandfatherland and Probably Der Milkmanland. Their decisions caused great consternation at the time with their English fathers, Derek Ponsonby, Lord Sebastian Meatlocker and Stanley Orwell, who all hoped that one day their lads would pull on the white shirt of failure, the England shirt, and not the white shirt of success, the Germany shirt. But their decisions seemed to have paid off handsomely as they are heading out to the wilds of Brazil with the Krauts.

Similarly, Oliver Goring-Hildred, Larry Costerley and Bertie Sailor, who is believed to be retiring to Abu Dhabi, will all be travelling with the frogs. The English FA really need to pull their fingers out with their recruitment policy. Our best young talent seems to have been tempted abroad. The system is broken, I tell you. The list goes on. Campbell, the young Scot, poached by Costa Rica. (Actually that probably was the best decision for him). Cousins will be playing for the Spanish and Lord Vermington for the bloody BELGIANS. Jesus in a hot air balloon, what is going ON? England will be knee deep in the mulligatawny this summer, I tell you.

One ray of sunshine is that the hateful, anti-social little twerp, Nasri, has by popular demand been left at home. It should come as no shock to those of us who have read Master Theodore WALCOUÉ’s autobiography that he made himself persona non grata in the French camp. An extract is below. 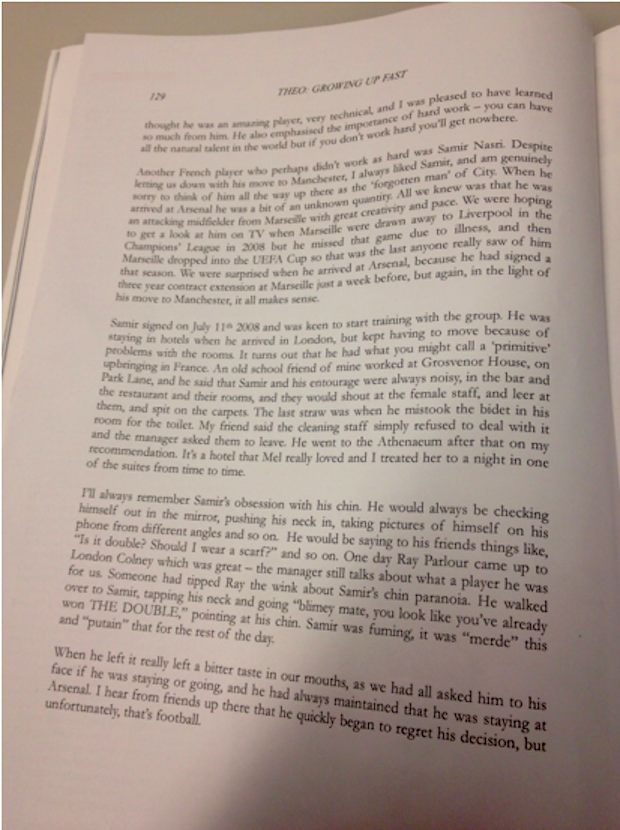 Plans for the Weekend?

I don’t have any plans for tomorrow, do you? I was thinking of getting the old soup-strainer trimmed in the morning, and then off to the club to get woozled. No doubt there shall be my trusty old three ‘C’s – cathouses, casinos and constabulary as the day turns into night. I jest, of course, for tomorrow we shall fight some tigers. In less enlightened times, a fight with a tiger was made somewhat one-sided, bearing in mind that only one of the parties had a powerful firearm, and we hope that tomorrow, Arsenal’s powerful firearms, Arsenal’s arsenal, if you will, have been checked and oiled, and do not jam on firing.

Apparently – and someone in the rags should write about this a little more – we haven’t won silverware for nine years. Well what a toothsome prospect a trophy should be. We would then be in possession of that most valuable of the habiliments of success – a cup. I Shall be pinning a yellow ribbon on all the understairs staff, whether they like it or not. Until 5pm tomorrow chaps and chappesses!