Morning all, welcome to a brand new week and one that is going to prove quite testing indeed, I reckon. After 120 minutes on Saturday, and with players in zones of both red and danger, it’ll be interesting to see what kind of team Arsene Wenger can cobble together for tomorrow night’s game against West Ham.

While we’ll have to wait for official team news, you have to think there’d be a huge doubt over Aaron Ramsey, just back from injury and well over 100 minutes under his belt. Alex Oxlade-Chamberlain ran until his legs were about to fall off, while Mikel Arteta, already tired, did the full 120. Without Flamini due to suspension, midfield could be quite makeshift indeed. Any team news that emerges during the day we’ll cover on Arseblog News and we’ll preview the West Ham game in tomorrow’s blog here.

So, after our win over Wigan, it turns out we’ll be facing Hull City in the final. The Tigers reached their first ever FA Cup final yesterday beating Sheffield United 5-3, and it’s one of those weird ones where we face each other twice in relatively quick succession. We’ll get all the guff about how Sunday’s trip to the KC Stadium is an FA Cup final warm-up, but this weekend they’ll have Jelavic and Long available, both of them are cup-tied for the showdown in May.

Again though, that’s one for the long finger as we have West Ham to deal with first, but hopefully we might have a player or two back from injury for that one. Mesut Ozil in particular is, I believe, pencilled in to make his comeback in that game, so fingers crossed we might see him make an effective return.

The Premier League pressures mean we have to put the Wigan game behind us rather quickly, and perhaps that’s no bad thing. As I said yesterday, getting to the final was fantastic, but the journey itself was like being stuck on a rickety bus beside a gross person who smelled vaguely of dried sick and had a wet cough which they’d let off in your direction every few minutes – when they weren’t sniffing luminous green snot stalactites back up their nose, that is.

Mikel Arteta has spelled out what needs to be done in terms of the league, saying:

I think it’s still there for us. I believe we can do it, but we need to win all our remaining championship games. If we don’t, then I don’t think we will do it.

And I think he’s right. I reckon we’re going to need at least 12 points from the last 15, and probably all 15 to finish in the top four. It’s going to be tough because of the injuries, because of the fatigue that is going to be a big factor in tomorrow’s game, and ultimately our form and confidence which have been quite low of late.

I don’t know that the Wigan performance is the kind that will necessarily provide a boost in confidence, we came so close to going out on Saturday, but I think players look at results more than anything else, and hopefully they can take something from it into these five games that will be so important. I think whatever happens this summer, having Champions League football is going to be crucial to (hopefully) driving the club forward.

It’s not impossible to bring in the right players without being in the only European competition worth anything, but it certainly makes it easier. For example, I’d posit it becomes very difficult to buy that ‘world class’ striker everyone wants without Champions League football, so we’ve really got to knuckle down and get the right results in these final Premier League games.

Meanwhile, Lukas Podolski has complained about the fact that was taken off at Wembley and that he’s substituted so much in general. He said:

On a very basic level I think we can all understand that. Players want to play. Players don’t want to be hauled off at Wembley while a young kid who has never scored a goal is left on, but I think despite Sanogo’s rawness, Podolski can have few complaints if he looks at his own performance. There were two moments that stood out for me on Saturday. One was early in the second half when he received the ball in midfield and if he’d played it quickly outside him to Monreal we had a bit of space to get into down the left. By the time he’d turned and made the pass he had a Wigan man on him. He won a free kick but that lack of zip in terms of his general play is part of why I think he fails to convince the manager. 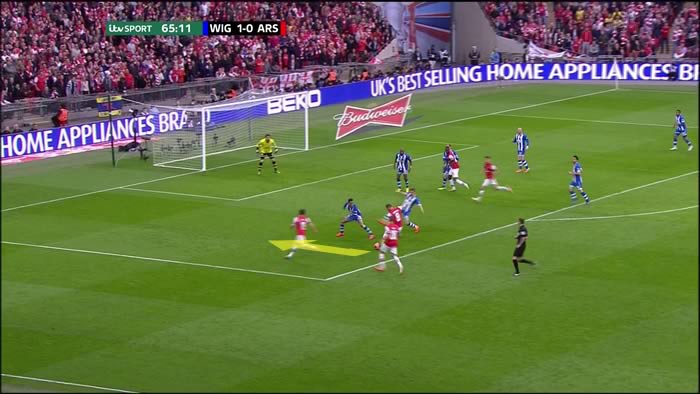 The second was not long before he came off. He had the ball just inside the Wigan area, with two men in front of him. Cazorla made a run outside him, which he should have spotted and played him in, instead he chose to shoot and it was easily blocked. He was taken off two minutes later.

I think there’s a recognition that what he does well, he does very well, but perhaps he doesn’t do enough things well to be a regular starter when everyone’s fit. He can strike a ball better than anyone in the team, so when he has a genuine opening he’s dangerous. His delivery from the left hand side is also very consistent and often creates chances for us, but beyond that it’s hard to pinpoint anything else.

He doesn’t make runs down the channels or in behind full backs, and often comes back inside which, when we’re playing poorly, is our default thing to do. Cut back, play a safe pass, try and build again. He’s more guilty of that than anyone else, I think. And the accusations that he doesn’t put in a defensive shift are perhaps a little overstated, but the simple fact is that when he does get back to try and contribute defensively, it can be genuinely heart in mouth stuff. His proclivity to make a foul in a dangerous area is obvious.

I’ve long said that with everyone fit (hah!), he’s a great player to have in the squad because he does have qualities others don’t, but the reason he’s taken off so often is purely and simply down to his performances and how they affect the team. I don’t blame him for being unhappy, but he’s the only one who can do anything about it, so maybe a little introspection is in order.

Right, that’s that for now. James and I will be recording to the Arsecast Extra this morning, if you’ve got any questions you’d like us to address, fire to them to @gunnerblog and @arseblog on Twitter, using the hashtag #arsecastextra. We’ll have that ready for you before lunch.