Arsenal fans pondering “what might have been” had Aaron Ramsey been fit for most of the season got their answer when he burst through on goal with one of his trademark runs to open the scoring. Asked whether he too harboured regrets whilst spending three months out injured, the Welshman answered with a knowing smile: “Absolutely, of course”, he said with the brazenness that permeates his game at the moment.

It might seem a bit delusional to suggest that Arsenal would be challenging for the title had Ramsey, and indeed, Mesut Ozil, been fit for the second part of the season but then again, one has to look at Arsenal’s performance in the first 15-20 minutes of the 3-0 win over Hull City to see how the pair elevate the team.

Initially, The Gunners started the game under great pressure with Hull closing down far up the pitch and playing balls directly into Arsenal’s box. It took one great save from and commanding goalkeeping from Wojciech Szczesny to help Arsenal through it unscathed, and Ramsey simply did the rest.

Actually, it was a wonderful team goal that Arsenal scored which gave them the lead, Ramsey picking the ball up from deep and then, after playing a pass to Ozil, continued on running. At that moment, the chance looked highly unlikely as Ozil was forced to run with the ball wide but suddenly, with a dummy and a rapid change of direction, he was able to spin away from his marked and feed the ball to Santi Cazorla.

The rest was elementary: Ramsey sensing the moment to up his intensity, drove into the box and finished confidently into the bottom corner. The goal was superb; the type of goal we have come used to seeing all season but finished by that guy, feels us with nostalgia and also, a little bit of regret of what might have been.

For the second part of the season, Arsenal had been missing those runs from deep that glue Arsenal’s passing game together. Because without somebody breaking into space, who have Arsenal’s myriad of ball players got to pass it to? Instead, play in that period would look soporific, lacking urgency and easy to pick off.

Actually, the way Arsenal started the game, under pressure and unable to string a few passes together, wasn’t atypical of their season. Even when they were playing well, Arsenal had large periods of games where they were forced to soak up pressure and then hit opponents on the break, like the second goal, or moments of rehearsed improvisation as Arsenal did for the first and the third.

Ramsey’s running for the second goal 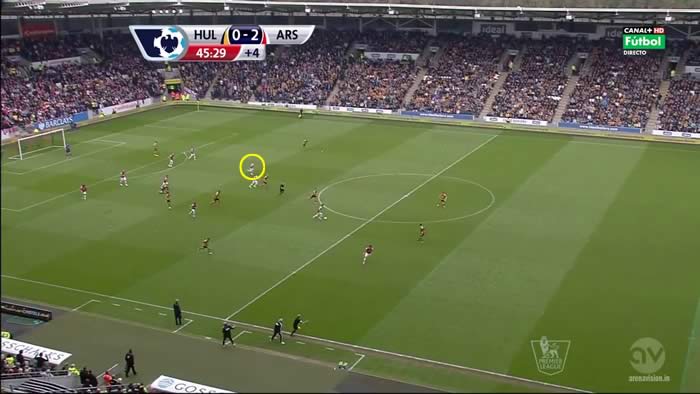 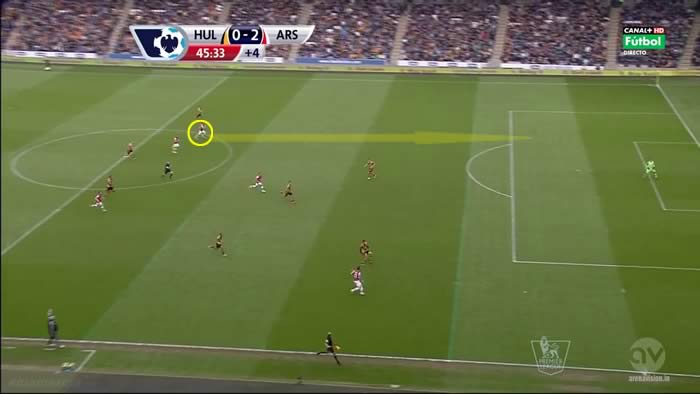 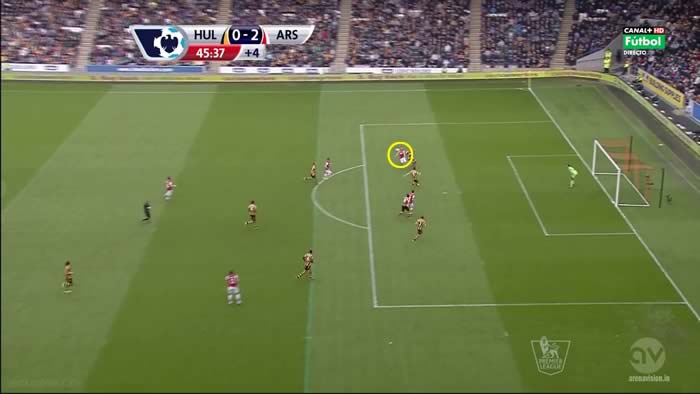 With Ramsey in the side, his runs allow Arsenal to get out of their own half when defending deep and with the added presence of Ozil, the ability to turn defence to attack, as Wenger said after the game: “We looked like we had problems to score goals away from home recently. Ramsey and Ozil give us a cutting edge in the final third that makes us look more dangerous to score. Ozil always has the timing of his pass, the incisiveness of passing makes you always turn quickly from defence to offence. That is of course very important.”

Ozil’s performance was once again understated but if you watch again, in the build up to each of Arsenal’s three goals, he’s there somewhere, injecting impetus to attacks with a sudden change of direction. Indeed, the way Arsenal play, bumping passes off each other, it requires little triggers so that the players know when to move their passing game up a gear. Ozil is brilliant at that, moving quietly into space, trading a few innocuous passes, always with his head up waiting for the moment to increase the tempo.

Certainly, that’s the key to Arsenal playing well, being penetrative and dynamic: when players turn on the ball. When they’ve got their back to goal, suddenly they turn and look to play the next ball forward to third man runners. Mesut Ozil and Aaron Ramsey are crucial to Arsenal perfecting that type of play.