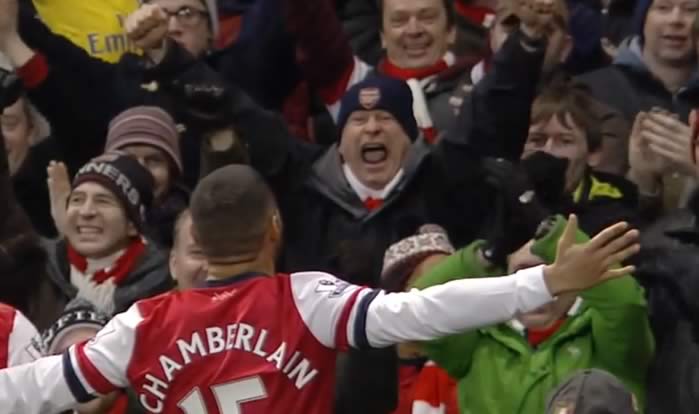 So, back to the top of the league after what’s fast become our signature scoreline and performance this season. A relatively slow first half, a second half burst in which we score twice, a clean sheet and another three points.

Arsenal have recorded ten 2-0 wins at Emirates Stadium this season, the same total as in the previous four seasons at home combined

With no Aaron Ramsey or Jack Wilshere, Tomas Rosicky still recovering from a smooshed nose and Mathieu Flamini suspended, the manager plumped for Alex Oxlade-Chamberlain in the centre of midfield. He’s long said this is the position he thinks he’ll play in long-term, but so far has chosen to use him mostly on the flanks.

Part of that is because of the competition in the middle, but it’s also an educational tool. But yesterday he had little choice and the faith he put in the young man was rewarded with a fine performance and two excellent goals. The first came from a well-timed run and a beautifully weighted Santi Cazorla pass over the top of the Palace defence. As the keeper went down expecting a first time finish, Oxlade-Chamberlain took a touch and just dinked it over him. As cool as you like.

But for me the second was just a sensational piece of football. With his back to goal he flicked a Tomas Rosicky pass into Olivier Giroud. The Frenchman held off the defender and laid it back into his path, allowing him to drive into the Palace box and finish low and hard. Speroni got a touch but couldn’t keep it out.

It was the kind of goal you don’t see too many central midfield players score. If it had been Luis Suarez you wouldn’t bat an eyelid, picking it up deep and charging towards goal, but from a 20 year old making his first Premier League start since the opening day of the season when he ruptured his cruciate … oof. It was an outstanding goal and Oxlade-Chamberlain’s performance was hugely encouraging when you look at how our midfield options have dwindled over the last couple of weeks.

Sometimes, for a player to flourish, there’s an element of good fortune or good timing needed. Without injuries and suspensions it’s unlikely he’d have had the chance to play in that central role; now he’s shown the manager he’s a very genuine option there and with that second goal displayed a quality that you have to say is probably unique to all the other fine players we have in this team.

Leaving aside the Ox, I thought our centre-halves were outstanding again, and the one time they did make a mistake they were rescued by Szczesny. Palace’s best chance of the game came when Koscielny, then Mertesacker, took it in turns to play the visitors onside, but Cameron Jerome’s close range header was saved by the Polish stopper who has been such a vital part of this season.

We have gone from having goalkeepers who cost us points to one who is now winning them for us with his saves and clean sheets. That’s number 11 in the league for him this season and it’s no coincidence that having the best keeper in the league sees us top of the table.

At the other end I thought we were all right. Giroud had little service, Ozil floated through the game well, and Santi Cazorla looks like he’s all set for a very effective second half of the season. I know there’s a desire in some quarters for us to batter an opponent, to score in a Man City-like fashion, as if that would make our three points even better, but I genuinely think this team has found a way to win games in a very efficient manner.

If I was being super-optimistic, I’d suggest that the current run, in which fixtures have been relatively routine, is one through which we’ve come while playing within ourselves a bit. We’ve done just enough to win without expending the maximum physically, knowing there are much more demanding games to come. I think we can play better than we have been and I’m hoping that over the coming weeks the level of our performance increases in relation to the level of our opponents.

We needed to get three points and it was difficult because Crystal Palace are a united team, very well-organised with a big physical quality and impact in every challenge. I must say that did that in a fair way but it was very difficult to create space. On our side we needed to be patient, intelligent and use our opportunities that most of the time come in the second half. That’s what we did.

Palace were tough enough to break down; as I mentioned yesterday they went to the Middle Eastlands and frustrated City who could only score once. But such is the confidence of this team in its ability to wear down the opposition – a quality the manager has to some extent attributed to Mesut Ozil – that there was no panic, no careless frustration, just a belief they could get the goals they needed, and so it proved.

Our position at the top of the table is dependent on what happens tonight between Man City and Chelsea. Given they’re away from home against decent opposition, I expect Jose Allardyce to go full 19th Century, so it might not be the most exciting game to watch, but I’ll be tuning in waiting for disaster to strike both sides. I suspect City will do them though.

And speaking of that game, how brilliant was Oxlade-Chamberlain on Sky afterwards. “Are you going to watch the big game?”, asked their post-game reporter. “Who’s playing?” was his reply. Classic.

Elsewhere, the manager has gone to some length to explain the Kim Kallstrom signing, saying the costs are shared and due to the lateness of the deal he decided to go for it, just so we could have that bit of extra cover for later in the season. He’s not expected back until the end of this month at the earliest, but as weird as it all is, it has started to make a certain amount of sense to me, under the circumstances.

I’ll explain fully in today’s Arsecast Extra with Gunnerblog – available on site later this morning. In the meantime, we can enjoy being top of the league, for now at least, and get ready for the first game in DEATHRUN1 coming up this weekend.