Of all the doubts about Arsenal’s championship credentials, the biggest had been what might happen if Olivier Giroud were to be injured. With the Frenchman unavailable for the visit by Cardiff City, both Arsenal striking candidates were given a chance to impress, but while Lukas Podolski underwhelmed, it was to be a bittersweet moment for Nicklas Bendtner.

Bendtner scored the opener, coming on for Podolski on 65 minutes, but tumbled after scoring and will now be out of action for some time. Theo Walcott then gave the scoreline, if not the performance, a presentable look in added time, wrapping up the victory in added time with a deft clip over the goalkeeper. Before that, Podolski showed glimpses of what he can bring to the centre-forward role, often dropping deep to link up neatly with the midfielders, but the question must be asked as to what long-term value does he bring to the club in that role?

In a way, Podolski reminds me of Robin van Persie. Initially, there were doubts about whether the Dutchman could make the transition to a lone striker because ever since he was signed, he was built up to be the heir to Dennis Bergkamp. In his first few matches up front on his own, he frequently furrowed deep in search of possession. But he steadily accumulated an understanding of how to play the role effectively, and instead of going backwards in search of the ball, he became a master of timing his runs and receiving the pass on the shoulder of the last defender. The problem for Podolski, however, is that he’s now 28: is it too late to expect Podolski to transform into all-round striker that Arsenal need?

In the first-half against Cardiff City, he exclusively operated in the hole in front of the centre-backs, starting high up and then dropping into the pockets to pick up the ball. To a degree it worked because his tendency to create overloads in the midfield, allowed Walcott to stay upfield, and Arsenal frequently targeted him with long-passes behind the defence. The weather, however, made it difficult to play those passes with accuracy and the skiddy pitch meant they had to be inch perfect. Unfortunately, two or three times, the ball fell agonisingly short of Walcott, although at other times, they found him and he was involved in Arsenal’s best openings.

Indeed, the game showed the importance of Walcott to Arsenal in this system, whether they’re playing well or performing badly. He’s Arsenal’s main outlet, stretching defences with his pace and providing depth to attacks, especially when the main striker’s role at Arsenal seems to be linking up with midfielders. Against both Chelsea and Newcastle, he was nullified because they doubled-up on him.

Indeed, at St. James’ Park, it seemed Walcott was Arsenal’s only outlet as 51% of passes went through his side in the first-half. That’s normal: this season, 42% of Arsenal’s attacks originate from the right (as opposed to 28% in the middle and 30% down the left). Asymmetry is not a problem per se – in its own right, it’s kind of a balance – but against Newcastle, and against Chelsea too where they stopped Walcott from playing the one-twos which he likes; it became a bit too predictable. There was much more even spread in the win over Cardiff, however, in a way, because of Podolski. 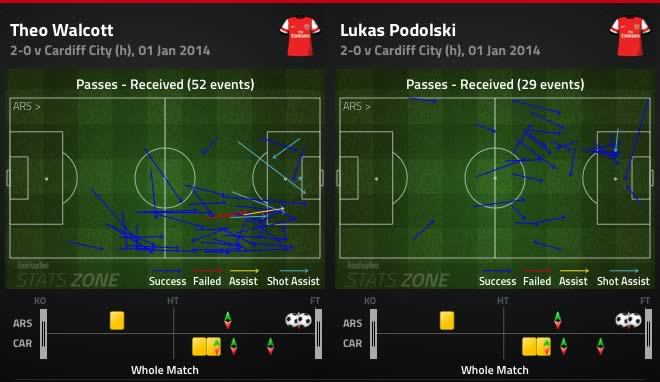 As well as dropping deep, Podolski prefers the left-side and as such, there was a more even spread of players. On another day, perhaps Arsenal might have taken advantage and scored more – and earlier. What they lacked was runners behind – and certainly Podolski was culpable for that although it must asked; to what degree? Because it’s neither Giroud’s forte to run behind defences and rather, it’s up to the midfielders to provide depth to attacks. Therefore in that respects the selection of Mathieu Flamini was perhaps the biggest error (and not Podolski up front). To be fair to Podolski, in the second-half, Arsenal upped their tempo and he made a couple of darting diagonal runs, once where Wilshere nearly found him with a through-ball and another where a cross evaded him.

With Mikel Arteta spraying the ball fantastically left and right, Flamini struggled to exert himself as the spare man in midfield. It goes without saying Arsenal could have done with Ramsey or Ozil to break down Cardiff’s defence earlier, although, it’s also not Flamini’s accustomed role to be the penetrative midfielder.

When Arsenal got their goal in the 88th minute through Bendtner, it was because they threw everything at the Cardiff goal to get the breakthrough (and credit must also go to the Arsenal defence for remaining strong despite the possibility of being exposed on the counter-attack). The extra presence of Bendtner helped. Indeed, I would add that both Bendtner and Podolski are similar to Giroud in that they play close to the opposing centre-backs then drop deep in search of the one-twos.

But Bendtner has greater presence, and being at the right place at the right time, adds a greater deal more purpose to Arsenal’s attacks. By that time, Arsenal had moved to a 4-4-2 anyway, with Theo Walcott instructed to play closer to Bendtner for Arsenal’s late siege. It says a lot of Arsenal’s character that it came; Bacary Sagna threw himself at Nacho Monreal’s cross and when the header was pushed out, it fell to the right man. Unfortunately, it goes in keeping with his recent time at the club that injury celebrating the goal, denies of him getting a proper chance at the club he so desperately wants.

Arsenal know how to win matches

It’s said that champions must be able to “win ugly”. That is not, as it is commonly misconceived, to win while playing badly. Certainly, a drop-off in performance of a title challenging team can realistically be described as “playing badly” but “winning ugly” means arriving at some sort of compromise stylistically in order to secure the win. Mikel Arteta expands: “We need to learn to win ugly sometimes. There are parts in the game that you cannot dominate for a number of reasons — you are a man down, you are playing against a good team, physically they overpower you, for whatever reason. But you get through that and you are still winning. And that’s a good habit. Winning.”

The 1-0 win at Newcastle was the definition of “winning ugly” – beating Cardiff 2-0 while not being as effective was not. In that game, Arsenal’s passing was off, and attacks broke down easily. They realised that halfway through the first-half that it wasn’t to be easy so they made sure they got the other parts of their game correct: defending with discipline, tracking runners and winning tackles. When they got the goal, Giroud pointed at the part of his body he scored with: his head, indicating the mental effort it required to get the win.

Indeed, looking at Arsenal’s season as a whole, it seems The Gunners have been more proficient at the quieter arts more than people have realised.

According to Opta, Arsenal lie fourth in the Premier League for average possession (56.2%) per game: in the last four seasons, they have topped the table with over 60%. Similarly, they lie in seventh for shots taken per game. What Arsenal have done well is manage moments better. If Arsenal are under the cosh, Wenger will obligingly ask his team to drop back and try and weather the storm, and then perhaps hit their opponents on the break.

What this sets up is for Arsenal to win the game later on, typically around the 60-90 minute mark. 21 goals have been scored in this period highlighting how Arsenal regularly get themselves in a position to win the game by putting faith in defence first. Wenger indicated a change in approach earlier this season when he said: “The fluency comes in patches; the sensible stability is there forever”. What’s notable is that perhaps beyond Liverpool, Arsenal haven’t been scintillating for 90 minutes (and in that game, Arsenal were under some cosh early on). They know now how to win matches.