The early team news ahead of tomorrow isn’t that encouraging, unfortunately. The whispers that Aaron Ramsey might be back turn out to be completely wrong and he, along with Mikel Arteta and Thomas Vermaelen will miss this game. In fact, according to the manager, none of them are expected back until after the FA Cup tie with Coventry next Friday.

You can’t help thinking the run of fixtures has been quite friendly. Whatever about tomorrow, when they’re obviously short of fitness, but the manager is going to keep them out of harms way until we face Southampton the following Tuesday, confident that the players he has got fit can deal with Coventry in the cup, and hopefully that the extra bit of rest/recuperation will be of benefit.

When the boss is talking about the ‘egalitarian’ nature of his squad (no, really!), you know he’s comfortable with the absences because of the strength we have there. He says:

In midfield we have plenty of quality players who you can rotate easily without really feeling, ‘today we are weaker’. We have fantastic players in midfield and it always allows us to keep what we call the ‘engine’ of the team fresh.

Hard to argue, really, it’s the strongest midfield we’ve had in a long time, and at no point do you really worry about a key man being absent because there are others who can over. Flamini for Arteta, Wilshere for Ramsey, and so on. It’s a long way from the dark days of the not too distant past when we were reliant on somebody as flaky as Song and after that the options were even worse.

Then there’s the news that Tomas Rosicky had to undergo surgery, with general anaesthetic, to put his nose back into place. It had been mashed somewhere over the region of his left ear after Agbonlahor’s sly straight arm challenge – something that’s still being overlooked by all and sundry – and although Arsene says he might be able to play with a mask, I’d say the chances of him being involved tomorrow are absolutely minimal.

My belief that he should play in a mask like this entertains me but on a practical level is more or less unworkable. The lack of peripheral vision would certainly have a negative impact on his performance, and with Gnabry and Oxlade-Chamberlain in the squad we do have options until such time as he’s better recovered from being knocked out by doctors.

Finally, Nacho Monreal is a ‘big doubt’ because of his foot injury. Thankfully it doesn’t seem as if anything’s broken but there is bruising and ligament damage. As yet we don’t know quite how serious that is and for how long he might be out. In the meantime Kieran Gibbs can slot back into the back four where he’s made substantial progress this season but I still fear we’re skating on thin ice a bit in terms of our depth at the back.

Even when you see squad list on the official site it looks like we’re short a player or two: 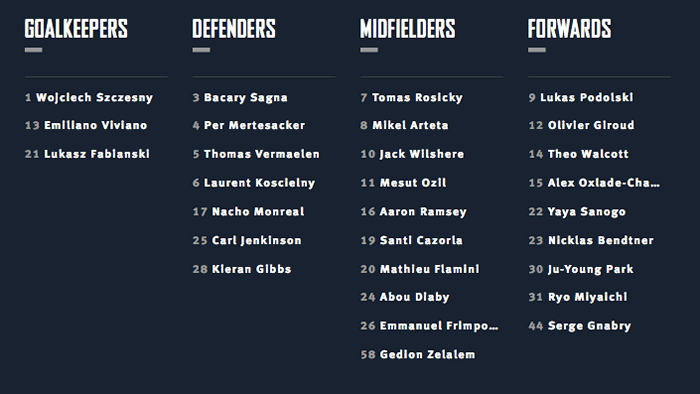 Clearly what we need, for the sake of my typography OCD, is 3 defenders and a forward, then all the columns will be the same length and that, as we know, is the key factor in any side that wants to win the title. You never win anything with different sized columns, as the saying goes. And yes, before you get smart, it’s perfectly acceptable for the goalkeeper one to be much shorter.

Anyway, no doubt the manager will be pressed on potential January signings when he meets the press this morning, perhaps he might be slightly forthcoming. I suspect he’ll be his usual inscrutable self, but you never know.

In other quick news the club have hired a new head of sports science from West Ham, marketing man Tom Fox talks about competing with the richest people on the planet, and after a strange time for the Arsenal ladies, Tim Stillman takes a look at what’s going on in his column this week.

Now then, time for this week’s Arsecast. Anyway, I’m joined by Iain Macintosh to discuss the week that was, grumping about Ozil and the array of desserts available to the media at the Emirates on match day. As well as that a couple of old friends drop in on the momentous occasion of the 300th Arsecast. 300! Time flies, eh?

You can subscribe to the Arsecast on iTunes by clicking here. Or if you want to subscribe directly to the feed URL you can do so too (this is a much better way to do it as you don’t experience the delays from iTunes). To download this week’s Arsecast directly – click here 32mb MP3).

News throughout the day over on Arseblog News, the Gent will be here later with his weekly review, and I’ll be back tomorrow with a full preview of the Fulham game.