Hello once more, and welcome to this corner of what the downstairs staff inform me is called ‘The Internet’. I have no interest in the ghastly thing. I do not even own a ‘computer’, whatever that is. I work much like Mrs Cartland, the dreadful pleb. I recline on a chaise longue, or perhaps in my favourite bath chair (Number 6), or perhaps in the bath. I bark this drivel to the long-suffering butler, who types it into a kind of folding glowing suitcase. Then what happens, you may well ask? I have absolutely no idea. But somehow it does.

I have taken the liberty of scripting Tottenham’s end of season highlights DVD. Which they may as well release now.

OPENING TITLES OVER MONTAGE (Black and white footage of 1961, a Glenn Hoddle pass, Gazza falling over)

It was January 4th, and the mighty Spurs, winners of the Costa Del Sol Tournament in 1965 AND 1966, travelled to a proper stadium for an F.A. Cup tie. The match was almost finished and we were delighted to have got nil, having been comprehensively outplayed for the entire match. And then an Arsenal footballer, Walcott is his English nickname, provided us with a reminder of the score whilst he was being treated for a knee injury. How we hated this! Losing, and being reminded of the score!

[CUT TO WALCOTT SMILING AND GESTURING ON A STRETCHER]

VOICEOVER
Our away boys were so incensed that they rightly began to throw missiles at him. Wonderful it were! We may have been playing like a bunch of clowns on quaaludes but in the bread roll throwing stakes we were Kings of London! Bread roll firm! Proper naughty!

VOICEOVER
And to make things EVEN BETTER for Spurs, the next day we learnt the little bastard was out for…. (SHOUTED, WITH ECHO) SIX MONTHS!

And there we have it. I shall be posting it to Mr. Levy in the morning and expect the normal fee. Under regular circumstances, a grand, but as it’s Tottenham I am expecting a cheque for a cool million guineas.

FRIDAY IS NOT FOR FOOTBALL

It will not have escaped readers of this column that Arsenal’s next tie is against Coventry. This tie is to be played ON A FRIDAY EVENING. Association Football should not be played on a Friday evening. That was written on the back of those tablets, if only Moses had turned the thing over. This is an aberration of the gravest nature. We leave the colonials to the Friday night gridiron. Fridays are not for football. Fridays are for the following pursuits:

We clearly have, in the FA, a dreadful buggery of uncouth coves who are about as civilised as Mr. Allardyce. They are seemingly intent on destroying civilisation as we know it and I will play no part in this monstrosity of a fixture.

I should like to extend warmth and felicitations to the excellent Herr Hitzlsperger. I bequeath him that highest of accolades, an honorary Gentleman’s Name. Arise, Sir Thomas Hilton.

MUTTON DRESSED UP AS OX

Word reaches Gentleman Towers that young Oxlade-Chamberlain, of the Hampshire Oxlade-Chamberlains, has started early construction work on what appear to be a magnificent pair of what we used to call in less enlightened times ‘bugger grips’ and today known as ‘Mutton Chops’, as worn by sundry Victorian explorers. I applaud this attention to tonsorial detail, although it is a shame he has decided to have his fine, lustrous moustache removed, but one feels that overall it is a net gain. 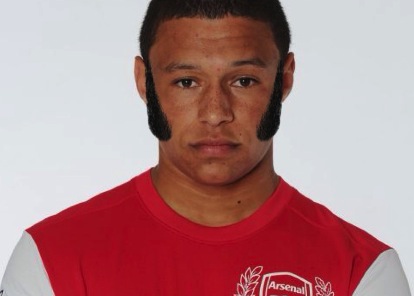 Previous articleOx returns but expectations have to be realistic + Arsecast 299
Next articlePodolski’s fitness, Rosicky’s contract and a French winger