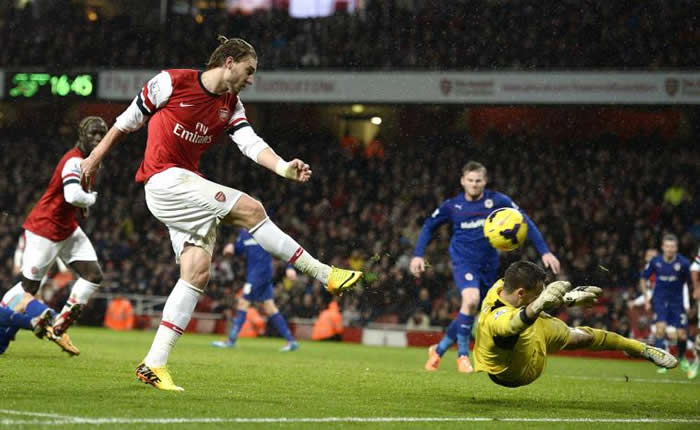 When Rod Stewart sang ‘Some guys have all the luck’ back in 1984 he clearly didn’t have Nicklas Bendtner in mind. Mostly because the big Dane wasn’t born and wouldn’t be for another 4 years, but coming on, scoring a huge winning goal, and then getting knackered when the keeper lands on you is the kind of thing that really could only have happened to Bendtner.

In a second half in which we didn’t just knock on Cardiff’s door, as much as pound it relentlessly, the breakthrough was still hard to come by. We really shouldn’t have left it so late, and when I say ‘we’ I mean Per Mertesacker. A striker would have been lambasted for missing those chances, planting two very presentable headers wide, and the BFG would have had a restless night last night had we not got the goal.

When it came, it was really a very well worked goal, with every Arsenal player bar Koscielny getting a touch. Szczesny rolled it out to Mertesacker and it went through Rosicky, Wilshere, Arteta, Cazorla and Walcott before Monreal’s cross. Bacary Sagna, determined to get himself on the scoresheet to the extent that he took a free kick in the first half, had one of those moments like he did against Sp*rs.

Something along the lines of: ‘Well, if none of you lot are going to do it I’d best have a go’. The keeper made a good save from the right back’s header but got just reward for all his time-wasting by pushing it into the path of Bendtner who clobbered it into the top corner. It felt like finally being able to go for a wee after being stuck on a bockety bus after a load of pints.

Unfortunately for Nick, the keeper landed right on his ankle, so his celebrations consisted of telling the other players to leave him alone. Sagna got it quickly and beckoned the physio, but it seemed cruel that he was denied the chance to enjoy being the hero. Sure, he’s not been the ideal pupil in recent times, but from what the manager said afterwards he’s been working hard and scoring that late is a bit special.

As it turned out, Theo Walcott was thrown up front for the last few minutes and sealed the deal a couple of moments later. Jack Wilshere’s perfect flick put him through, and the finish, dinked over the keeper, was very nice indeed.

Up until then, however, it had felt like it might well be one of those days. The first half was pretty turgid, brightened only by the performance of Jack Wilshere who was our most effective and dangerous player. He created decent chances for Cazorla and Walcott and clearly should have had a penalty when tripped in the box by that bloke who looks like a squashed ogre.

Lukas Podolski found it hard to get into the game and provide us with the focal point in attack that Giroud does. Some of that, of course, is down to how long he’s been out, but I think it’s mostly because it’s not a role that particularly suits him. He’s good at playing off somebody like that, and it was noticeable how we improved when Bendtner came on to play in that position.

The introduction of Tomas Rosicky played a big part too. His endless positivity on the ball really makes a difference, and he drove us forward further and further, pushing the visitors back. A little over a year ago, on a similar kind of day, Arsenal lost 2-0 at home to Swansea, caught out on the break desperately trying to win the game.

Although there were a couple of Cardiff moments late in the second half, we look far better organised this season, meaning that the push could continue right until the death. In the end the win was well deserved and if it wasn’t particularly stylish, so what? You don’t get extra points for winning with a flourish. We scored two, kept a clean sheet, and went back to the top of the table.

We needed resilience and intelligence not to make a mistake at the back and continue to go forward. In the end, Nicklas got us great relief.

He is a player who has gone through some difficult periods so I just want to give him great credit. I told him already today that he is back to the level I want him to be at, and if he continues to develop like that he will come back into the team. Unfortunately he got injured today and it looks like it is not a question of days, but weeks, with a sprained anke. I am very sad for us, but for him as well.

I don’t know, it doesn’t mean we go straight from Nicklas’ ankle straight to the transfer market. It means that we have Giroud and Bendtner out.

I think that the manager clearly considered Bendtner an option for the rest of the season, which may well have been affecting his thoughts regarding the transfer window. I guess much now depends on the prognosis and how long he’s going to be out for. If it’s a considerable lay-off, can he then gamble on Podolski to fill in when Giroud is absent?  Or can the team learn to play with a different kind of player up top?

For me the big question is: Is the kind of striker we’d all like the club to sign available in January? If not, do we then settle for second or third best to fulfill a short-term need? Do we take a player now to give us a push for the title at the expense of signing somebody better in the summer who could push us further in the long-term?

It’s not an easy one to answer, and I’m sure that’s what the manager will be pondering too. If he can find the right player (in whichever category he fits), then I’m sure we’ll do something, but if not, spending for the sake of spending is rarely the answer.

Anyway, we’ve got a whole month of speculation to get through, and as yet we don’t know how long Bendtner, or even Giroud, will be out for. With more information on that front we might be able to make a better guess. It’s a topic that I’m sure will be up for discussion on tomorrow’s Arsecast so tune in for that.

As it is, we’ve got a bit of a Premier League break, but up next it’s that lot in the FA Cup. No rest for the wicked. Till tomorrow.