It’s getting cold these mornings. That’s no good.

I updated Mac OSX to 10.9 yesterday. Disappointed they still haven’t found a fix for the Adobe Acrobat Updater popping up every few minutes. I’m thinking napalm at this stage.

But enough about my exciting life. We’ve got football to look ahead to this weekend and it looks like we’ll be up against a Crystal Palace side without a manager after Ian Holloway quit yesterday. “Chamakh. What the hell was I thinking?” he might have said, but probably not. He talked of lacking the energy to keep them up and is probably a victim of his own success in a way.

There’s talk of Tony Pulis taking over. Pfff. If I were a Palace fan I’d rather stick with Holloway until the end of time than have that foul goblin king anywhere near my football club. In fact, I’d rather the manager was pulled out of the crowd at the beginning of each game than have that bloke impart his particular ‘brand’ of football on me.

In fact, I would go so far as to say that I would give the job to the love child of Vincent Tan and that bloke who hangs around near where I live but sleeps in the park and drinks at least 14 cans of Dutch Gold per day and smells like a basket of septic otter shite and his hands look like they’re made of the same kind of the skin that’s on the bottom of your feet.

Still, I can see the ad in the South Croydon Advertiser Gazette now: 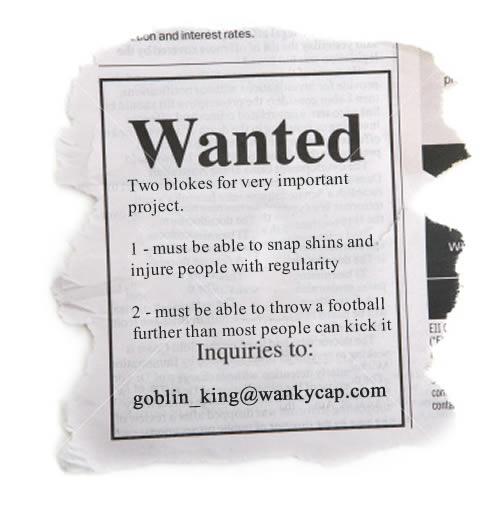 It does seem to happen to us a lot though, doesn’t it? A manager gets the can just before we play that team. The one that sticks in my mind is Sheffield Wednesday back in 1998. I remember this because it was the game when Paolo di Canio got sent off for pushing the referee. And also because they scored a very late winner. As well as that it was my birthday and I was working in AOL technical support that day.

I was keeping up with the game on IRC, I believe, but it was also memorable because the bloke who sat opposite me was looking around suspiciously and then two managers came in, told him to log out and take his things. We thought something terrible had happened to him, like his parents had been murdered outside a cinema, or his house had been set on fire by ruffians and all his possessions had been burnt to a crisp, but it turned out they’d discovered he’d spent most of his days not really helping AOL customers connect to the AOL software but instead looking at websites which combined naked women … and poo.

To each their own, and all that, but, you know, ewwww. We never saw him again. But anyway, back to the point in hand, I’m pretty sure that just before that game Sheffield Wednesday had sacked their manager and replaced him with Ron Atkinson. His day was memorable not just for the fact he won the game on his managerial debut for that club, but he emerged from the tunnel, waved to the crowd then promptly sat down in the Arsenal dug-out.

And hey, having just looked all this up on the Internets, it turns out I’m conflating a whole load of memories. Danny Wilson, fresh off his pop success with Mary’s Prayer, was manager of Sheffield Wednesday that day and it was Atkinson taking over at Nottingham Forest when he sat in the wrong dug-out. And we won that game 1-0 thanks to a goal from Johan Cruyff, our emergency loan signing who’d been let go by the New York Cosmos for smoking a Benson and Hedges during a game. During a game!

Anyway, the thing is: no good can ever come of Tony Pulis. Never, ever forget that.

From our point of view it’s a good chance to respond to the midweek defeat to Dortmund. Palace really haven’t been playing well this season, we have, and when you consider our next two games are against Chelsea in Capital One Cup and then the nefarious Mugsmashers next week it’s important that we get ourselves back on track and quickly.

With the manager talking of tiredness affecting the midweek result, you wonder if he might change things around a little bit against a team we should beat. Starts, perhaps, for Vermaelen, Monreal, Jenkinson and Gnabry? Maybe a little bit TGSTEL action instead of Giroud? The Frenchman says he’s fine and has targetted the Chelsea game as one in which he can rest, but it’ll be interesting to see what the boss does this weekend.

Go for it from the start and take players off if the scoreline allows, or trust in his squad keeping plenty of firepower on the bench in case we need it? Those are the decisions he’s paid the big bucks for. And why he, as a grown man, does not wear a baseball cap and last season’s 50% off Foot Locker trainers.

Finally for today, and vaguely on the Giroud trip, this is funny.

Back tomorrow with an Arsecast and all the rest of the bits and bobs. Until then.