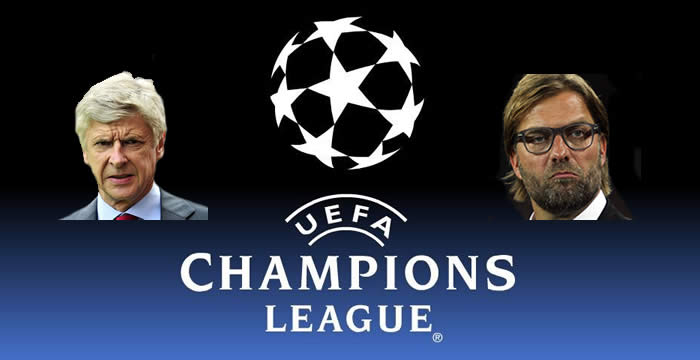 If our start to the season has been relatively kind in terms of the fixture list (although people seem content to overlook Napoli and Sp*rs), things really start to heat up in the next couple of weeks.

And tonight we face a real test in the Champions League. I’ve said it before that these are the kind of games you want to see in European competition. While it’s nice to stick four past some small club from some smaller league, it’s nice like a piece of bread is nice when you’re starving. It’s no filet mignon though. Tonight is. As the Dortmund manager said:

If I had to pay for a ticket, then I think I would pick this one.

Two fantastic teams, who like to play attacking football, going head to head in games that will go a long way to deciding this group. They’re in great form so far this season. Just a point behind Bayern in the Bundesliga, they’ve scored more goals than Guardiola’s team and look to have coped well with the departure of Mario Gotze who left a great big red hole in the middle of their team when he defected to Bavaria.

The similarities between the two clubs, and the philosophies are marked. It’s something Arsene Wenger touched on yesterday, saying:

I feel sympathy for them, of course, because they lost big players at a very young age. We have gone through that. It hurts.

Yet Arsenal have now come through that period when finances were restrictive and Gotze’s reign as the most expensive German footballer lasted only until August when we paid £42.5m for Mesut Ozil. But it’s hard not to look at the two clubs, the way they’ve built young sides (Dortmund with more tangible success too having won the title two years running), and not feel some kind of kinship with them.

Not quite plucky underdogs but just not a soulless, affluent, bullying behemoth. And we’ve got more than one of those to deal with in England. Thankfully, we’ve managed to move into a position where we can compete, to a certain extent, and Klopp is aware of the impact Mesut Ozil will have on this club. He says:

This team missed a player and I think that could have been Mesut Özil. He’s  technically perfect, fast and has developed a drive on goal. He is a very intelligent player and could play in any team. You don’t have to force him in training, it is all natural and that is why it was a great idea from Arsenal.

Yet he had praise too for Ramsey, Wilshere and Giroud, and when you look at the two sides there’s real quality in both which sets things up beautifully for tonight’s encounter. Although we’ll be missing Mathieu Flamini (ruled out with concussion), there’s still enough of a platform for us to play our game. Mikel Arteta will take his usual position at the base of the midfield and I suspect Aaron Ramsey will be deployed in the role he filled at the end of last season just ahead of him.

It might, and I stress might, blunt him a little bit from an attacking point of view as he’ll be required to be more disciplined – particularly when we don’t have possession – but then you look at what’s likely to be in front. Ozil, Wilshere, Cazorla and Giroud. Not too bad, eh? There’s also a good case to be made to include Rosicky from the start, although who you leave out is a big question. In this kind of game, the way he sets the pace and the tempo with his pressing is invaluable, but that’s a good problem for the manager to consider.

The lack of Arsenal clean sheets is a small worry at the back of Gooner minds at the moment, because at some point we’re going to have one of those days in front of goal. It happens to every team and in that case ensuring we keep the opposition out is going to be crucial. However, I just can’t see tonight playing out as a 0-0. They’ve got players bang in form and scoring plenty, as do we, and the way both teams go for the game should make it one of those fantastic European nights.

I put us as slight favourites for this one, I think we’ve got the confidence and momentum to go out and take three points which would, more or less, ensure qualification for the knock-out stages. Three wins out of three would make it almost a shoo-in, but a draw or less, and a Napoli win against Marseille would throw it all wide open ahead of the return trip to Dortmund in a couple of weeks time.

All of which just adds to the spectacle. It’s a high stakes game between two quality opponents, let’s hope the game lives up to its billing.

Beyond that there’s little news other than an injury set-back for Theo Walcott who had to pull up in training last week. At the moment his absence is not felt particularly, but having that speedy weapon back in our arsenal would be a welcome thing.