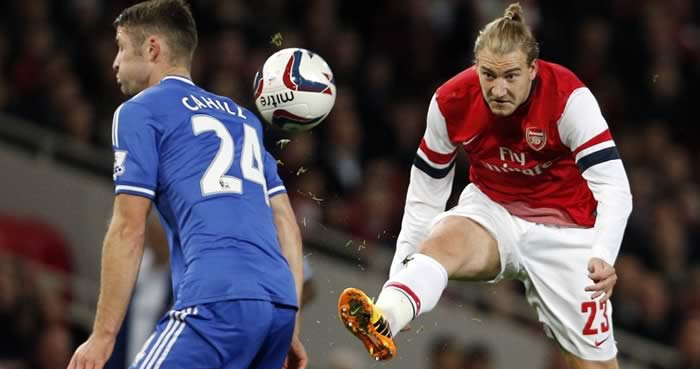 So Capital One Cup defeat to Chelsea and it was one which seems to have sparked plenty of debate, shall we say?

Arsenal put out a stronger team than I was expecting with Wilshere, Ramsey, Koscielny and Cazorla all starting. The obvious replacements came in for the players who needed to be rested, but there was strength on the bench with Giroud, Ozil and Sagna all there.

It’s fair to say Chelsea had the best of the first half without ever really causing too much danger. They passed it around nicely enough but didn’t threaten and it was a classic shoot ourselves in the foot moment that saw them take the lead. We had a corner, within 20 seconds it was in our net. They came up-field, Carl Jenkinson’s header back to Fabianski was weak, and Azipilicueta nipped in to poke it home.

Nacho Monreal almost equalised a couple of moments later when his shot fizzed just wide of Schwarzer’s far post. In the second half I thought we were actually getting on top of the game and had efforts from Cazorla, and a couple from Ramsey which weren’t too far off-target. There were groans when Bendtner laid one off to the Welshman on the edge of the box instead of shooting himself but I thought if Ramsey had hit it first time it would have been a decent chance to get one back.

Arsene put on Ozil for Miyaichi and almost immediately Chelsea got a second. Mata’s shot was well hit, giving Fabianski no chance, and that prompted Giroud for Bendtner. But at that point it was as if Arsenal settled for the result. It felt as if they knew the schedule for the coming weeks and the idea of taking this game to extra time wasn’t exactly an inviting proposition.

When the manager put on Ju Young Park for Aaron Ramsey you knew that was that. Giroud had one saved at the near post, and a late Cazorla shot went just wide (story of the night), but you never got the sense we were really going for it in the final stages. Chelsea were happy enough to sit back and soak up the pressure, their experience and depth allowed them to do that and it’s something they’re clearly comfortable with.

I think it was a very tight game that was decided on one or two mistakes but overall we cannot play all the games with the same players, at the some stage you have to rotate. It is difficult to swallow that happened to us in the last week, but the mistakes are so big that it can be corrected. We have to keep the basis of our game and go into it with that and get our mistakes out.

While I thought Chelsea played pretty well, when you gift a team like the opening goal you are going to make life difficult for yourself. Looking back at Dortmund game you can see how both the goals were avoidable, and certainly their first last night was down to us making an error rather than being cut apart by scintillating opposition play. The worry is that we’ve been through a period when those kind of mistakes have been rare, and it’s something we need to address, and straight away, when you look at the opposition we’ll be facing in the coming weeks.

As an attacking force we really didn’t click. Nicklas Bendtner came in for some stick for his display and while I’m not his biggest fan I didn’t think he was as bad as some people are saying. I don’t quite know what level of performance people are expecting from a guy we’ve been trying to sell for three years and who has hardly played in the last 18 months, but it seemed harsh to single him out. He was up against a good central defensive pairing and it’s not as if he was getting any real service – our crossing all night was poor.

It also seems a bit counter-productive, regardless of how you view Bendtner, to give stick to the bloke who is our only back-up for Giroud right now. If anything happens to the HFB, we have little choice but to field the Dane. And that could be the case right up until January at least.

Outside him Ryo Miyaichi continues to look a long way out of his depth at this level, but the reality is that if Arsene had Podolski, Walcott, Oxlade-Chamberlain or Gnabry available then he wouldn’t have been starting the game. And Carl Jenkinson is a bit of a worry too. Leaving the mistake aside, he really needs to work on his aerial game if he wants to develop as a player. Too often he’s found wanting in this area and it’s something he has to improve on.

I think we missed too many of the players who give us a bit of depth, certainly from an attacking point of view, and Chelsea were experienced enough to take advantage. Having players like Juan Mata, Eto’o, Mikel etc in your second string isn’t bad either, so it’s not as if they beat us with kids.

All of which is to say I don’t think there’s any real need to panic. It’s disappointing to go out to them at home, but I’ve been up front this week about my feelings for this game, and I’m finding it hard to get too bent out of shape this morning. We’ve got bigger fish to fry in the next few weeks, but it’s crucial that we get ourselves back on quickly.

I think we can look at why we lost against Chelsea and Dortmund and find both answers and solutions. There’s a very real need to re-focus because if we continue to pepper our performances with individual errors we will get punished, but cut them out and we become a lot more difficult to beat. If we can do that, and just find that 10% more as an attacking force, then I think we’ve got a good chance of getting the results we want.

Clearly last night wasn’t great by any means, but for the first time in years the Capital One Cup doesn’t seem like our only hope of silverware. It’s down to us to make sure that’s still the case. Three points on Saturday would go a long way to consign this game to the history books.