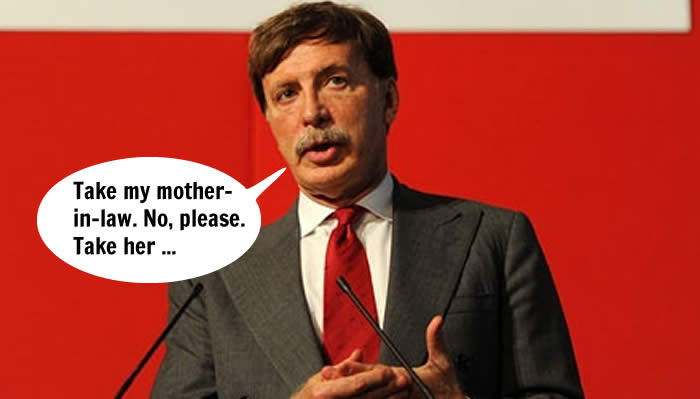 It’ll be a busy day around the club as the AGM takes place this morning. There’s a handy guide of who’ll be there, and why, right here.

Naturally Stan Kroenke will be there, as you’d expect from the majority shareholder. And today is likely to be a less tumultuous affair than some in previous seasons, mostly because we’re doing well as a team and we’re all still basking in the glöw of smashing our transfer record into smithereens. Which isn’t to say it’ll be all sunshine and lollipops; there are bound to be issues which are brought up which will require some examination, but the rather scrappy vibe from last year is surely not going to repeat itself.

It’ll also be the first AGM in years that hasn’t been hosted by Peter Hill-Wood, an MC and dry-as-you-like comic of some repute. I suppose it’ll be Ivan Gazidis who takes the reins this year and it’s hard to imagine him being anything other than slick and professional. Maybe that’s what these events should be, but for all the moaning I’m sure there’ll be many who will miss the uniqueness PHW brought to proceedings. Maybe Sir Chips can lash out a few mirthsome asides.

No doubt there’ll be a bazillion and fifty people (erring on the side of caution here) Tweeting live from the event as it happens. As usual we’ll have a full report afterwards for you to pore over, as @LittleDutchVA gets his pencil sharpened. And by pencil I mean quill. We do things to a certain standard around these parts. As soon as the delivery boy delivers the wax-sealed parchment by pony express (actual pony) we’ll have it online for you at Arseblog News.

As for on-pitch stuff, it’s all pretty quiet as we head into a period of games which will really go some way to defining where we are this season. Before the next break there are seven games in 22 days with Premier League, Champions League and Capital One Cup all to contend with.

This weekend’s fixture, home against Norwich, is one you might look at as easing ourselves back into the swing of things. Without wishing to underestimate them, or take anything for granted, it could certainly have been a more difficult game. There haven’t been any further reports of post-Interlull injury and the word is that Mesut Ozil is going to be fit after the scare over his knee on Tuesday night.

There are also suggestions that both Theo Walcott and Santi Cazorla will be back in action which would obviously be a huge boost. Walcott’s pace is a weapon we can use, especially when you’ve got players like Ozil, Cazorla and Ramsey feeding him the kind of passes which can exploit defences, but the idea of Ozil and Santi playing together is just mouth-watering.

You do wonder if it’s a game the manager might look at, in the context of the schedule we have and with Dortmund coming up on the Tuesday, and think it’s one in which he might be able to rotate/rest a little bit. Especially the players who have been away on international duty and played a couple of games. Players like Arteta, Flamini, Cazorla, Walcott etc have had a nice rest, daily training etc, without the intensity of matches, so there could be the temptation to mix things up a bit.

That is the whole point of having a squad and when we do have everyone fit (I know, I know), it’s not as if the options we have are poor. Compared to previous seasons when you’re clearly affecting the overall quality of the team if you rest a couple, the replacements/alternatives we have this time around are much more reassuring. I suppose he has to weigh up their fitness, how it might impact the team and its momentum and make a decision on that basis.

Elsewhere, Wigan have spoken about their desire to sign Ju Young Park on loan, but say that his wages are an issue. On one level I can understand the club looking for the best deal possible, but on the other, we have to pay him anyway so why not let him go somewhere and play?

The chances of him appearing for us are infinitesimal. Clearly Arsene Wenger has little or no faith in him to perform at any level other than Capital One Cup and even then he found himself on the bench as a relatively unfit Nicklas Bendtner was given a chance at red and white redemption. With the Dane now back in the fold, albeit in the short-term, Podolski on his way back, Sanogo somebody the manager actually wants (when fit), and Giroud firing this season, it’d have to be a fairly special set of circumstances for him to even get a sniff.

Maybe one day we’ll get the full story of why we signed this guy, but whatever the reason, or reasons, it’s turned out to be a massive mistake for us and for him. If we’re not going to use him, let him go somewhere and play on a regular basis, and let’s not haggle over a few quid that we have to pay either way. Especially as we’ve written off contracts for other, higher earning, players in the very recent past.