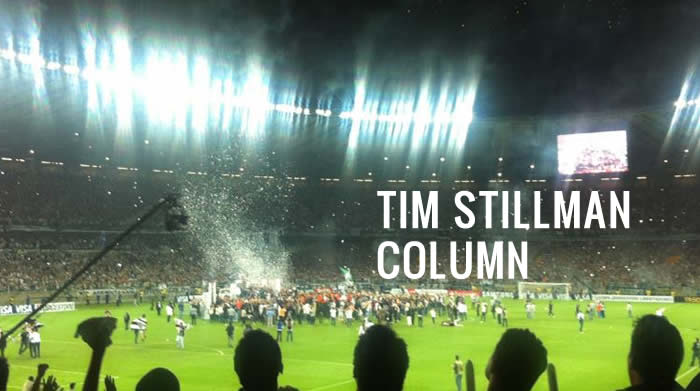 Supporters having second teams, or indeed supporting more than one team isn’t an entirely new occurrence in football. In the 50s and 60s, before away travel became common, fans would ‘ground hop’ within their localities to catch a game on a Saturday with their team engaged in a different region. One of the gentlemen I attend matches with used to watch Spurs at White Hart Lane on alternate Saturdays when Arsenal were playing away from home. My mother did much the same.

However, the concept of the “second team” is one that has risen exponentially over the years. Firstly, as transportation has become more available and more sophisticated, people have been able to support clubs that aren’t immediately local. Therefore, they have tended to ‘adopt’ their immediately local club in tandem with their most prominent love. Another one of the fellas I go to away matches with attends just as many Barnet matches as Arsenal.

As time has progressed and immigration has increased, this development has manifested itself on a more global scale. Another one of the guys I go to Arsenal matches with has his family roots in Tuscany and therefore supports Fiorentina as well as the Gunners. It’s an extension of his family identity, with his parents having moved from Italy to North London. As with every other phenomenon on the planet, digital technology has seen it evolve from microbe to sky scraper swotting mega beast in a few short years.

In the ‘global village’ of the internet, watching teams from all four corners of the globe at pretty much any time of the day or night is an illuminating possibility. La Liga and the Premier League in particular have looked to colonise (or “monetise”) the furthest flung nooks and crannies of Africa, Asia and South America to cultivate support. As a result, the idea of affiliating oneself with a foreign side, either as a secondary concern to your local team, or as your one true love, is commonplace.

If increased coverage if the Internet’s most beautiful gift to football, then there is some devil in its detail. The world wide web has reduced footballing discourse into a long, irreconcilable argument where the chief aim is to be considered “right” above all else. The Internet’s Bosman clause if you will. As such, self righteous arguments rumble on as to one’s “right” to adopt a second team or indeed support more than one. This unfettered chest beating and dick swinging is much beloved of social networks in particular.

That said, I’ve never really had a “second team” myself. There are teams I look out for. Most of my weekend drinking companions are Millwall fans. I look for their results chiefly because they impact the ambiance of my Saturday nights in the drinking dens of South London. The truth is I’ve never really had reason to have a second team. Given the amount of time I devote to travelling to games and writing about Arsenal, it’s not really been practical in any case. Until now that is. You may or may not have noticed that the column has been in hibernation for the last fortnight.

I’ve been in Brazil where I have to admit, a nascent fondness became a fully bloomed holiday romance. My girlfriend is from the state of Minas Gerais in Brazil. Her team is Atletico Mineiro, her local team. Like many Brazilians, she began following the Premier League as its popularity became a global concern and took Arsenal as her English side. Consequently, I’ve found myself regularly watching Atletico, nicknamed “Galo” (which means ‘Rooster’) in the Brasileirão. A bond, albeit at distance, formed.

The affinity was heightened when Galo re-signed local lad and Arsenal ‘invincible’ Gilberto Silva in December, unashamedly one of my favourite characters of Arsenal’s recent history. I’d booked my latest visit to Minas Gerais some months ago. Serendipitously, Atletico made it to the Copa Libertadores Final to coincide with my trip. After some frantic phone calls, we were able to procure two tickets for the second leg in Belo Horizonte’s opulent Estádio Mineirão.

It’s been a dream of mine to watch a match in Brazil since my early teens when a friend described the atmosphere of a Corinthians match he had attended. For my first taste of live football in Brazil to be the second leg of a Libertadores Final was boa pra caramba. Galo trailed Paraguayan champions Olimpia 2-0 from the first leg. But Atletico’s home form had carried them through the competition. They reconciled the same deficit in the home leg of their semi final against Newell’s Old Boys.

Atleticanas are fiercely proud of their formidable home record. Wednesday evening represented their first home defeat since 2011 in fact. The locals have adopted the slogan “Caui no Horto, ta morto.” This roughly translates as “Fall in Horto (the Belo Horizonte neighbourhood where Independencia stands) and you’re dead.” The 2-0 deficit multiplied by Galo’s fearsome reputation in their home city was a combustible cocktail for a crackling cauldron of an atmosphere.

I took this video about one hour before kickoff. It’s difficult not to be seduced by the Galo band that persistently produce a hypnotic beat to aid and abet the voices of the home faithful. At times, the rhythm they teased out from their drum kits verged on full on drum n bass. It was almost like the underground car park raves beloved of my student days. Galo clawed back the two goal deficit to send the game to a penalty shootout.

As Olimpia’s Matias Gimenez smashed his penalty against the post, a cacophony of hitherto noisy, feverish Brazilians began punching the air and clasping one another in triumph. A young man behind me dropped to his knees and sobbed. My girlfriend just cried. It’s nigh on impossible not to become swept up in a penalty shootout at the best of times, but this was something special. My emotional attachment obviously wasn’t as strong as it would have been for Arsenal in the same circumstances. That could simply never be. Yet this was a beatific illustration of football at its best.

My Portuguese is currently serviceable, but not really conversational as yet. So as a young Brazilian man threw his arms around me and began to babble excitedly into my ear, I could only offer “Estou muito feliz” (I am very happy) in response. On reflection, it was a typically stoic, British response, even in lieu of a greater lexicon of expression. That night and the next day as we walked around Belo Horizonte in black and white shirts, we were greeted with an incessant backdrop of car horns and fireworks across Belo Horizonte’s south side.

In BH’s Diamond Mall, around 40% of the hundreds of shoppers were decked out in Galo shirts. I don’t think many of them intended to do any shopping at all whilst there; they just wanted to walk around in their shirts and see that others were doing the same. It was a lovely reaffirmation, especially during the silly season in England, of what supporting a football team can be about. That unspoken sense of belonging.

You’re probably expecting my payoff line to lament how I miss watching Arsenal win trophies. It won’t. I’ve seen Arsenal achieve so many historic feats in such a short time, that I’ll have still had a pretty good run of being a fan even if we never win another pot for as long as I live. Especially when set against friends of mine that follow the likes of Orient, Millwall and Sheffield Wednesday. Seeing Galo win their first ever Libertadores actually made me grateful for the many moments of Arsenal history I had borne witness to in person.

Galo are a perfect second team for me. They play through the summer and their league games tend to be played on Sunday evenings GMT in any case. It’s almost impossible for them to meet Arsenal in a competitive setting and there are few lingering animosities in the Brasilerão for an English football fan. Minas Gerais is a state I’m likely to visit sporadically. I suppose I could technically regard Galo as “in laws” in my footballing genealogy.

They are analogous of my quasi assimilation into Brazilian culture. Hopefully, next time I visit my language skills will permit me to join in more of the chanting, save for the plaintive cry of “Hail, Atleticoooooo.” Arsenal is my home and my mother tongue. There’s no competition and there never will be. But Galo might just pitch up on my sofa from time to time. LD.