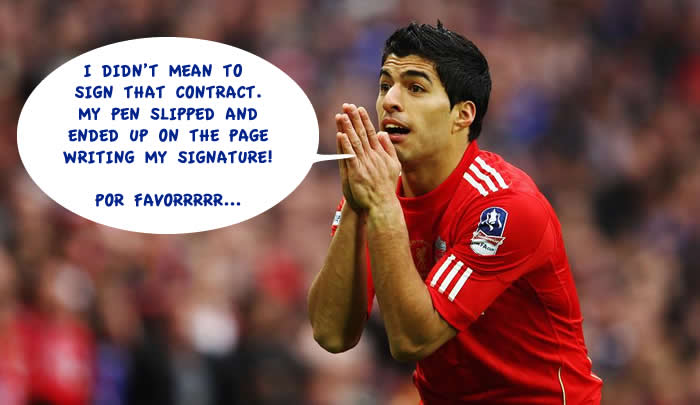 So, the big news from overnight is that Luis Suarez has gone public with his desire to leave Liverpool and join Arsenal. In interviews which appeared in the Guardian and the Telegraph (just to make sure, I guess), he called on the Anfield side to honour an agreement they had which lets him leave if a ‘Champions League’ club came in for him.

I think Arsenal have obviously been briefed about this agreement (something Suarez says is ‘written’), hence the £40m and a quid offer last week. In the interview, Suarez says:

It is not as if I am asking to move to a local rival. And I would not consider moving to a club outside the Champions League. I have made my desire to move known in private various times and now it feels like the time for me to make it public.

I don’t think there can be any misinterpretation of the situation. He wants out, he wants to come to Arsenal and having gone this public he has, like many players before him at other clubs, made his situation there pretty much untenable. And let’s face it, Arsenal fans know this scenario only too well. We went through it with Robin van Persie last summer, although his was far less bridge-burny (you might even say dishonest). To a lesser extent the Cesc/Nasri scenarios were the same, even if they didn’t play out anywhere near as publicly.

And leaving aside rivalries and the usual ‘banter’ (I hate that word more than I hate Phil Collins), it’s hard not to empathise with them on this from a footballing point of view. Their best player, someone hugely important to their team and their chances of getting back into the top four, wants out just a year after signing a new contract and pledging his future to the club.

Just like we did last summer, I’m sure Liverpool fans can pull up quotes where Suarez talks about how much he loves their club, how he wants to win there, how he can see his future there. And now he wants to go. If Champions League football was so important to him, why did he sign that new deal (beyond monetary reasons, obviously)? At the very least, why didn’t he ensure that whatever clause was in the contract was absolutely watertight from his point of view so he wouldn’t have to try and keep a football club and a football manager to their ‘word’?

Although, as I mentioned above, he says it’s written, it also seems like he’s hoping they’ll come through on promises they made, and if that’s the case it’s unbelievably naive of him and his agent. So, from that point of view it’s easy to see it from the Liverpool angle. If they’re not keeping their word to Suarez, he’s hardly keeping his to them, is he? Nobody comes out smelling of roses.

Then, I think about how this might upset Alan Hansen and it makes me forget about it all. But hey, that might be just me.

Anyway, the desire of Suarez is very clear, but Liverpool (probably briefed that it was coming) made plenty of noises in the hours leading up to this interview about how they had no intention of selling the player. Both the manager and the owner were very public on the ‘not for sale’ thing, although Rodgers added the caveat of how he’s not for sale … unless their valuation is met. And here, I think, is where things get sticky.

I think Arsenal clearly believe that this £40m + £1 clause exists, hence the bid. Suarez and his camp believe that exists. Liverpool have said it doesn’t hold up, hence their intransigence. It’s hard to imagine Arsenal paying whatever it takes to get him. £40m is already so far outside of our comfort zone I’d say there are turtles tails all over Highbury House, so it’s going to come down to the clause and whether or not it works for the player or the club.

In reality though, it’s going to go one of two ways. When you’re dealing with a player who so desperately wants to leave that he goes to the press he claims to despise to make his position public, you (as the club he currently play for) have to accept that it’s almost always a terrible idea to keep him. This isn’t posturing for a new deal and an improved contract. He genuinely wants to go.

As Arsenal fans we know that the best thing to do is sort it out as quickly as possible then use that money to reinvest in the squad. We know this because we’ve done exactly the opposite in summers past. We faced this very situation with Cesc and Nasri in 2011, yet procrastinated all summer, perhaps believing we could turn things around with the players, but most likely because we were playing a stupid game of hardball with potential suitors.

The upshot of that was Cesc left on August 15th. Nasri hung around so long we played him in our first home game of the season (a 2-0 defeat by the Mugsmashers in which Suarez scored, actually) before selling him to Man City. That left us with massive problems, compounded by an 8-2 thrashing at Old Trafford before we went on a supermarket sweep on deadline day grabbing new players to fill those gaps. Thankfully, a couple of those signings worked out very well, the others, not so much. So if Liverpool and their fans want to learn from a masterclass in how not to deal with this kind of situation, there it is.

But there is also an inclination to stand firm. To remind a player he’s not bigger than the club. To hold him to the contract he so readily signed last summer. And, let’s be honest, to save face. If I were the Liverpool owner, asking what Arsenal had been smoking, I’d be disinclined to sell him because it would make me look like a bit of a chump. Suarez’s plea to be allowed to leave came hours after Henry told fans ‘I don’t know why people ask us if we are selling the club or the best players, because we are not. We like to buy stuff, not to sell.’

Reputation is important. How does he come across if, after all that bluster, he caves and sells Suarez to Arsenal? Which is why I think that despite all the evidence that dealing with situations like this efficiently –getting the money, improving the team, and moving as quickly as possible – is the best way to go, Liverpool will make this an absolute nightmare for the player and for us.

And look, I get that completely. I’m sure I’d feel much the same if it were one of our players looking to bugger off somewhere else, especially in these kind of circumstances and especially after that player had caused so much controversy and consternation alongside all the goals he scored. It’s easy to trot out the ‘let him rot in the reserves for a year, see how he likes it’, line, despite the fact that never, ever happens.

The other thing I’d be thinking if I were Liverpool is that even if they make him stay, Suarez isn’t going to go on strike or refuse to play in a season which ends with a World Cup in South America. He might not like it much, but it certainly adds a another layer to everything.

Ultimately, however, this whole things proves that anyone who expects loyalty from a footballer is, frankly, bonkers. When you look at what Suarez put Liverpool through, how they supported him (leaving aside the rights and wrongs of that), and the fact he signed a new contract last summer, only for him now to chuck it all back at them via a nicely worded interview, it’s a stark reminder that putting stock and faith in footballers is a fool’s game.

For once we’re on the other side of this but if, in a couple of seasons, whatever his motivation, Suarez decides he’s had enough of us and wants to go somewhere bigger, we can’t say we weren’t warned. Arsenal must know exactly the kind of man they’re planning to spend £40m on. If we get plenty of goals, and no bitey racism in the meantime, then maybe it’ll turn out to be a good deal, but there’s no doubt in my mind we’re playing with very expensive fire.

ps – Arsenal: any chance, while all this is going down, we might buy that centre-half and midfielder we need more urgently than a striker? Thanks.