I am writing this week’s alloquy from the fair isle of Jamaica, Kingston Parish, where I have repaired to escape the incessant and soul-destroying blizzard of Arsenal transfer rumours. This was not an entirely successful endeavour; upon arrival at Norman Manley International, a young operative was checking my papers (“You look remarkably well for 135.”) and asked me what I thought of The Arsenal’s performance during the transfer window. He will recover from the walking stick indentation very soon.

This acronym of course stands for Summer Normal, Arsenal Fudged it Up. Our frailty was horrifically brought home this Saturday past at the hands of Ordinary Villa. The ignominy of defeat by a club like this is somehow more potent than a reversal by Palace or Hull; at least those could be described as freakish defeats, spirited performances by the top division’s ingénues, freed from expectation by their lowly status which somehow engenders a helter skelter whirlwind of attacking audacity that could not be controlled.

Notwithstanding the denigration of duty by undertaker’s assistant and prize codpiece Anthony Taylor, who not only booked Sesley, Wilshère, Cousins and Costerley, sending off the latter, as well as showing the mustard* to his own linesman; Doug Ellis; three people in the upper north bank; and the fellow who works behind the counter in the Arsenal Fish Bar on Highbury Park, he gave a blue card to himself and a handed out a second green card to generously be-beaked Paul Merson lookalike Gérard Depardieu.

At time of writing, we are fairly close to asking Ottoman Athletic if we could switch it to seven-a-side this evening due to the casualty list. A list which will expand once the medical team get their cleavers into them, or worse, keep them chained in a cellar like Mr. Abraham Dolby 3000.

On the positive side, this was another example of nonpareil tactical nous by Mr. Windsor. To get the whole ‘New Invincibles’ yoke off the lads’ shoulders early on will prove decisive as a confidence booster on our forthcoming 37 game unbeaten run. I can provide some small assistance to the club on this matter. 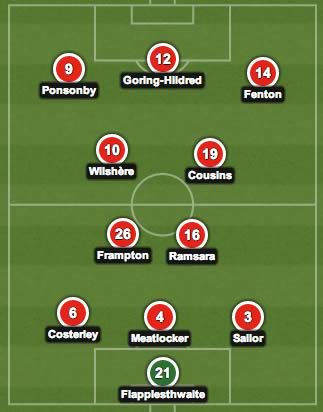 Although no tactician, I feel that a reversion to the WM formation would provide a thrilling combination of defensive solidity, creative possession in the middle third, and the potential for a devastating attacking triumvirate up top. Or of course, it should provide the kind of belly-bouncing laugh that the world expects of The Arsenal at present. I have provided an instructional line-up:

This is of course as it stands in August 2013. I fully expect the current attrition rate to continue and have thusly made contingency plans for some time during February, following the inevitable January panic buys.

At least Flappesthwaite will be fit. I hope against hope to be proved wrong, and that tens of millions of pounds of our money will be spent on some toothsome, clinquant new faces. A spare leviathan of a centre-half would be delightful.

The playing squad needs investment like Gareth Bale needs a punch in the face.

Some Cogitations on the Transfer Market and Arsenal’s Place Thereof

I should like for a moment to counter the prevailing theory that The Arsenal have never been big spenders. Students of this great club will know that the exceptionally well-mannered and graceful David Jack – an inside forward in the Cousins mould – moved in 1928 from Bolton for £10,890, the first five-figure transfer fee. A substantial fee, yet one negotiated down from an initial £13,000 by the simple method – so the story goes – of getting the Bolton directors so lit up on gin that they agreed to the lower figure.

So my question to Mr. Gazidis and Mr. Law – why not invite boggle-eyed goblin David Moyes out to dinner somewhere and slip him a Mickey Finn? Some cheap blended whisky should do it as he looks like the sort of egg who wouldn’t appreciate a single malt. Moyes looks like one of those fellows that talks the talk, but on his fifth pipe of opium he hits the deck like a sack of van Persie. We’d have Master Potatohead Wayne Rooney heading south for nary more than a couple of million guineas.

Or if that fails, open ourselves up to extreme possibilities: offer the money that a player is worth, and buy the player from the club. This does not have to happen at one minute to midnight. This can happen in a very clearly demarcated portion of the calendar. Plenty of other clubs are doing it. It’s quite the fashion. The parvenus of SW6 delight in a spending spree. Even mid-table outfits like Middlesex Rovers and the aforementioned barometers of failure, Aston Villa, are doing it. Everyone’s doing it. Which brings us neatly to Dick ‘The Dick’ Law.

A TRIBUTE TO DICK LAW

One feels that all Arsenal fans should take a moment to pay homage to this giant of football. Dick is an ingenious mastermind who sits in his Bondvillainesque lair, staring at banks of computer monitors, conducting myriad simultaneous telephonic conversations with legions of gimlet-eyed scouts who are identifying the world’s top talent for us, which he then bravely ignores. His devotion to the sisyphean task at looking at a list of the world’s top players and then not sending a fax is legendary. In the underappreciated world of not signing top players he is without peer. If you need something not doing, Dick ‘The Dick’ is indubitably your man.

To show the mustard.

This week, as referred to above, to show the mustard is when the undertaker’s assistant produces a card to warn a fellow of a caution. Or if it’s an Arsenal player, it’s to show that a fair tackle has been made, but the player on the receiving end of the tackle fell over. E.g., “That was a lovely clean tackle, but his opponent fell over. So he should be shown the mustard.”

And now I must leave you, for my victuals await. A splendid supper of curried goat, with sides of callaloo and rice and pea, along with a pint of overproof rum and a large, fragrant cigarette. I shall return to Albion when this fevered transfer madness has subsided. Cheers!