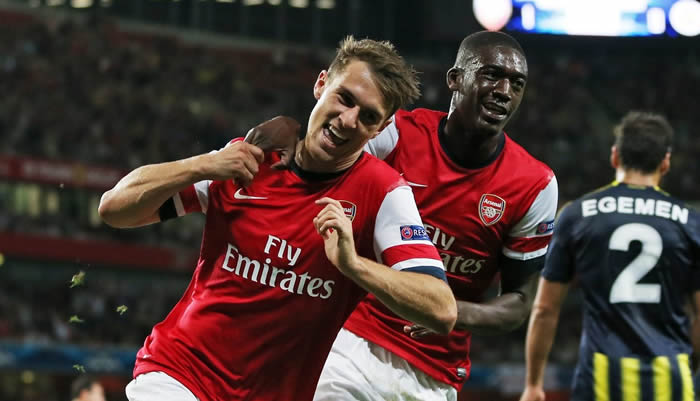 If it wasn’t already after a 3-0 win in Istanbul, Champions League qualification was secured last night with a 2-0 win over Fenerbahce, making it a 5-0 aggregate thrashing. We’re in the draw for the group stages on Thursday, and while there was much to enjoy about last night, some of it came at a cost.

Once again Aaron Ramsey put in another display that deserves huge credit – not simply because of the quality of his performance, but how far he’s had to come to make it happen. He went through a period of intense struggle following the injury. He lost time, confidence, the faith of fans, and form. He was played out of position and roundly vilified when not playing well.

Lesser men might have buckled, decided it would be better to go elsewhere, to build up slowly in different circumstances, but he got his head down and when given the chance to play in his real position showed why Arsene Wenger paid £5m for him five years ago now. I’m not a huge believer in the theory that being played out wide was good for him and made him a better player today. I just think if you play any central midfielder as a wide forward you’ll expose the shortcomings in his game, and at the time you’d have to ask if that was really in his best interests.

Still, he did what he was asked and didn’t complain. When he was moved into the middle in the second half of last season, he began to rediscover some form and confidence. Now, look at him. I know we’re only a few games into this new season but he’s a completely different player from 12 months ago. He scored twice last night, the second a quite brilliantly timed run and the sort of caressed finish you might associate with Bob Pires (*swoon*).

It’s great to see him play so well and to have come through what must have been a very difficult time for him. And while it’s certainly ok to doubt a player’s ability and/or potential, there were those who did far more than that and he became something of a lightning rod for all the team’s ills. Three goals so far this season, all in the Champions League, is as many as he got in the previous two campaigns combined, and if he can keep this up we could be looking a player whose potential is about to explode. Fingers crossed.

He was ably assisted once again by Santi Cazorla, about him I’m running out of superlatives. The Spaniard is just an amazing footballer. He can’t be anywhere near fully fit after a summer in Brazil and a truncated pre-season, but he was brilliant again last night. Driving the team forward, almost scoring with a left footed shot, and when required he was back digging in defensively too. He’s a wonder.

Despite some shaky moments, and Wojciech Szczesny got another good shot stopping performance under his belt, it was a solid team display. They had some freedom down our left hand side at times, but never really looked threatening, while we looked like a team that new the game was won and played with the handbrake ratcheted up to the top at times.

The downside, as mentioned above, came in the shape of injuries. Lukas Podolski was stretchered off after pulling his hamstring, and you can’t help but think it’s a little bit more serious than the three weeks Arsene Wenger said after the game. Ramsey came off before the end to sit on the bench with a groin problem, while the last 15 minutes of the game seemed to consistent solely of Fenerbahce trying to kick Jack Wilshere’s ankle off.

There were people suggesting that Wilshere shouldn’t have even played last night, with Sp*rs coming up on Sunday, and that the lack of options was to blame for any potential knackering of him. It’s a reasonable point and if you’ve been reading all summer you’ll know I’ve gone on and on about squad depth. But, on the other hand, as much as I think we need new players – at some point don’t we have to let Jack be a footballer? We can’t wrap him in cotton wool forever.

I’m all for not overplaying him but ultimately his job is to play football and he’s going to get kicks on the ankle and the knee (and possibly the head) like anyone else. Anyway, fingers crossed it’s not serious for him or Aaron and they’ll both be fit and ready for Sunday’s clash with that lot.

We completed the job and we had some problems to get into the pace of the game. Overall, especially in the second half, we controlled the game and did a professional job. It was maybe not a very exciting game but we did what we had to do. Overall we scored five goals and didn’t concede so we are in the group stage. That’s what we wanted.

And on whether injuries force his hand into the transfer market:

We have to see how bad the injuries are. I cannot tell you more than we are on the market. Everybody knows. The whole world knows that now. I cannot be more creative than that in the press conferences because all has been said and nothing has been concluded yet so I can understand your questions but I cannot give you more answers at the moment.

For me, however, the need for signings is the same as it was before this game, before qualification, before the start of the season. The group of players we have has shown themselves to be capable, willing, determined and resolute in the face of intense pressure following that opening day defeat to Villa. We’ve played three, scored 8, conceded 1 and looked much more like an Arsenal team than we did during the run-in.

Which is why they need help. They’re already stretched to the limit in terms of numbers and quality – the teams we’ve been beaten have been decent but not much more than that. As the level of the opposition improves, I think we’ll need more to be able to win those games.

Now that there’s absolutely no doubt about our Champions League status, and it becomes even more obvious that reinforcements are needed, we have to get busy in the market this week. Starting today. As soon as possible. Not delaying until the end of the window, because there’s a big game coming up on Sunday. And we might need a bit of strengthening for that.

If we buy the right players, and enough of them, we might just surprise some people this season. It’ll be very much a case of better late than never, but at this point that will have to do.