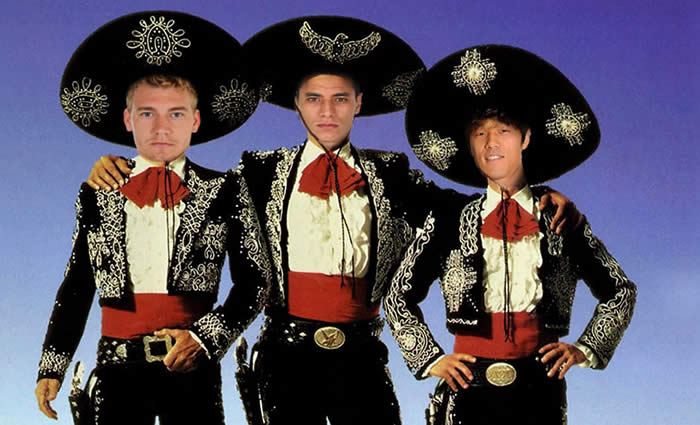 Good morning and happy Friday to you.

A rather fraught week comes to a close with still nothing much having actually happened. There’s been lots of talk of stuff, but we’ve been short on the actual events and all that. Thankfully, there’s a bit of football today to take our minds off things. The final game of the Asia Tour takes place this morning (KO 11.30am) as we play Urawa Red Diamonds.

It should be a reasonably competitive game, like the one against Nagoya Grampus, and hopefully another step forward in terms of fitness and conditioning. You’d imagine everyone fit will get a run out at some point, which means Alex Oxlade-Chamberlain and Wojciech Szcesny could come back in having missed out Monday, although Laurent Koscielny is still a doubt after his ankle injury.

Again, that leaves us with just Per Mertesacker as our only fit, senior centre-half, which is a worry, but a situation that would be a great deal more concerning if we were on the eve of the new season instead of a couple of weeks away. It’ll be interesting to see what the boss does, I suspect Bacary Sagna will be the one to fill in again and I also wonder if this is quite handy for the boss. He’s got Carl Jenkinson chomping at the right back bit, while nobody can deny Sagna looks to have lost a little zip in the last 18 months.

Understandably so, because of his injuries, but I do wonder if Arsene Wenger might see him as a solution to our shortage of personnel in that position. He could give Ignasi Miquel a run (although from what I’ve seen he’s been deployed more at left back than centre-half on tour), but it looks like Sagna is his go-to guy for now. Ideally, we’d sign ourselves a good centre-half, and keep the competition between the Frenchman and Jenkinson to right back. You don’t have to go back too far to recall what a dearth of options in the full back positions can do to a season, so the better stocked we are back there, the better, even if the versatility of some players is a bonus.

Meanwhile, the Suarez stuff rumbles on. It’s clear there’s a big issue in that he and his agent believe the clause was a release clause, Liverpool believing otherwise. It’s just a ‘We have to tell you some shit’ clause. I’m reliably informed that Pere Guardiola’s English is not particularly great, but even so you’d have expect a bi-lingual law-talking guy to have looked over the contract before they signed it.

Still, it makes the Liverpool owner’s rather bullish Tweet make a bit more sense, and some reports say Suarez has asked the Premier League to mediate on a transfer. The Mugsmashers manager, Brendan Brent, says that the Uruguayan shouldn’t move to Arsenal because Liverpool have lots of fans in Australia, saying:

I am not sure many teams will have done what we have done in the last couple of games [play to crowds of over 80,000 and 90,000 in Indonesia and Australia respectively]. I am sure Luis will have seen the sheer size and status of the club. So why would you swap Liverpool to go to Arsenal?

He then, quite brilliantly, answers his own question:

OK, we might not be in the Champions League and haven’t been for a while now but our competitors have grown around us and we have to step up to the challenge now.

That said, I can understand why he, and the club, are not that keen to let him go. After putting them through the wringer, he signed a new deal just last summer, he played brilliantly, made a show of them again, and while we always say loyalty is dead in football, I don’t think it’s unreasonable that they’re fed up with his antics this summer. If it were us, and certainly if it were me, I wouldn’t be inclined to make life easy for him or the club trying to buy him.

I suppose the good news, if you can look at it that way, is that his suspension – which sees him sit out the Premier League until October – means we’ve got plenty of time to sort it all out. Another six weeks of the transfer window, in fact. What joy!

Elsewhere, Oliver Giroud has backed the move for Suarez, saying he’d welcome competition, but like so many players on this tour, has publicly urged the club to get busy in the transfer market. He says:

I think we need maybe two or three more players. Yes, that’s what we need. To show ambition. The club has to show the fans that we want it. Me and my team mates, we need it as well. It’s all about the team.

What a fantastic attitude, and let’s hope the powers that be are sitting up and paying attention to what the players are saying. The rest of the interview in the Mirror is a great read too, and although he had some dodgy moments last season, I think he showed enough to be really positive that he can improve in the upcoming campaign, whether we sign Suarez or not.

At the moment though, it looks as if there’ll be more departures before anyone arrives. Gervinho is being strongly linked with a move to Roma, where he’d link up with his old Lille boss. I don’t think it’s ever really worked out for him with us. Despite some good performances he’s been inconsistent and unconvincing, and I think he’s reached that tipping point where, regardless of how he plays, he’ll be viewed as a weak link. In cases like that it’s often best to cut your losses and if we can recoup €8m of the €12 we paid for him, then I don’t think that’s bad business at all.

Emmanuel Frimpong could also be on his way as the midfield clear-out continues. It’ll be a wrench for him, no doubt, having grown up at the club and having a real connection with it as a fan, but it’s nigh on impossible to see a way into the team for him.

If those two go, that pretty much just leaves the Three Amigos up front, and should we find anyone bonkers enough to take them (not an easy task, you have to admit), then the wood we have left in the squad is very much alive because all of the dead wood will be gone. And in terms of that side of our transfer business, few can have any complaints about what we’ve done.

Finally for today, if you fancy winning a fantastic stadium print, check out the competition here which runs over the weekend. I’ll announce the winners on Monday.

News, match report, and anything else throughout the day on Arseblog News (follow on Twitter for instant updates), more here tomorrow.