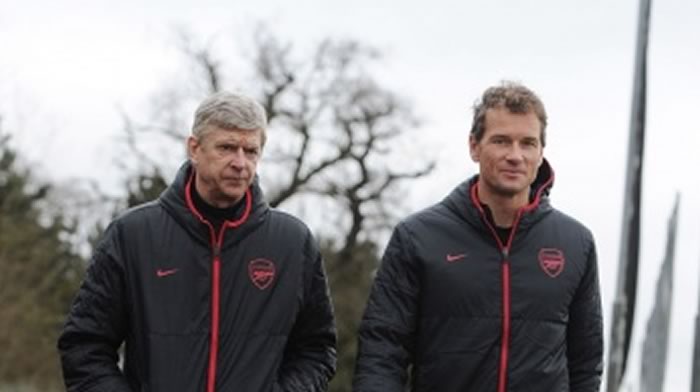 May is drawing to a close and it’s as quiet as you would expect. There is an interesting piece over on Arsenal Times this morning about the goalkeeping situation and bits and pieces surrounding Szczesny’s dropping, Fabianski’s return and some behind the scenes stuff involving the coaching.

Now, I can’t speak at all for what happened re Wenger’s decision to bring Fabianski back for the Bayern game. I think it was timely for both parties. The manager knew Szczesny’s form wasn’t great and it was a chance to show Fabianksi – who he’s always held in high regard – that he had some faith in him. Regardless of whether it was felicitous in terms of timing, it was still a brave decision.

To recall a keeper who hadn’t played for over a year, for a game of that magnitude (pop pop), when the confidence of, and in, the team was low, was a huge risk, in my opinion. It worked out though. Fabianski played well that night, and in the subsequent games, until injury handed back the place to Szczesny. And anyone who didn’t see the difference in the younger of the Poles for the final games of the season was watching blindfolded (which, considering the way the games went, was probably a very nice way to do it).

The more interesting stuff comes later on, however, when the article says that Szczesny may have upset the manager by voicing concerns over the coaching he was receiving and how it wasn’t tailored well enough to his game. They say that when Jens Lehmann was back at the club, doing his coaching badges, he advised Szczesny that training regimes ‘were not player specific enough to really make our keepers the best they could be.’

Szczesny, after enjoying sessions with Tony Roberts, apparently spoke to Arsene about the situation and whether or not the boss was ‘upset’ I can’t say, but I do know that there have been worries over the goalkeeping coaching for a while. Without going into specifics, the thrust of the Vital Arsenal piece tallies with stuff I heard last season. Szczesny’s loan spell at Brentford was hugely beneficial and educational for him and his development, and while young players’ improvement tends to happen in bursts and plateaus, you won’t find too many Arsenal fans who wouldn’t have worries about the progression he’s made versus the potential we’ve all seen in him.

Also, and it’s something I’ve touched on before, there are clear parallels between all our keepers in recent times and the flaws in their game. Almunia, as we know, had his faults, but was it just coincidence that we saw the same mistakes replicated by Fabianski and even Szczesny to a lesser extent. What’s the common denominator? We were just unlucky to find keepers who made the same errors or was this a consequence of how they were being coached?

Many people suggest that the signing of an experienced goalkeeper is the solution. Somebody from whom Szczesny can learn, who can mentor him, and while I certainly think there’s a need for healthy competition in the goalkeeping area, aren’t the first two areas the domain of the goalkeeping coach rather than a teammate? At the end of the day, unless you’ve got the most selfless professional known to man, it’s nearly counter-productive for the senior player to be teacher.

Playing games provides vital experience, no doubt about it, but it’s what happens on the training pitch that prepares the goalkeepers for the situations they’ll face. So while there’s no suggestion what’s going is below-par, I don’t think it’s unreasonable to ask if it could be improved. With David Seaman back in around the club (he was doing some coaching last season), and Jens himself doing badges and getting experience with many facets of coaching (not just with football clubs), it might well be that we see some changes in this area ahead of next season.

Not much else going on, other than a story in a Finnish newspaper to say that Arsenal are being lined-up for a friendly against Man City on August 10th. The game would take place at the Olympic Stadium, apparently, but there aren’t any more details than that. It would, most likely, be the final pre-season game with the Premier League season set to kick off on August 17th, so it’ll be a good chance to kick Nasri. No doubt we’ll get more on that in time.

Finally, do check out the competition in which you can win yourself an Arsenal Photowall, worth up to £500. Details here.

As a new keeper arrives, Jack Wilshere announces his departure