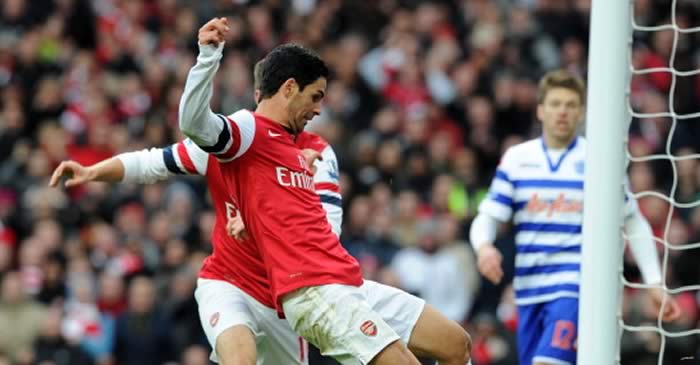 A mild *boilk* to begin with.

We have a late kick-off today, playing at Loftus Road against newly relegated QPR. I have to admit this game worries me a bit. Perhaps I’m just bracing myself unnecessarily, taking a slightly glass half empty outlook, but I think after their Premier League status has been sorted they might play with a measure of freedom that the relegation battle didn’t allow.

It’s certainly something Arsene Wenger is aware of, and we have to hope that the team don’t go out and think this one is going to be easy in any way. The win at home was far from convincing, and we lost this game last season. After a run of successive wins, we got a bit big for our boots, didn’t do the simple things well enough and got punished. Anything like that today will likely prove fatal for our Champions League hopes.

On the other hand, QPR’s not-giving-a-shitness might continue, the home crowd might be utterly fed up with the chancers who have played so poorly all season and it might just be perfect for us, so who knows? But as Lukas Podolski says:

I think you must not concentrate on the other team, we must concentrate on ourselves. I don’t look at what QPR are doing. They will fight but I think we have the ability to beat them.

The German is likely to continue up front, with Arsene Wenger saying:

I believe it is his best position maybe because on the flanks he needs to work so hard and he’s more a finisher than anyone else in the team. Him and Theo Walcott are two finishers. He was a little bit rusty (against Manchester United) because he had not played a lot. But of course it’s a good opportunity for him to show that he has a future in this position and that he can finish.

Considering how well others played against United it’s hard to imagine there’ll be much else changing. The only real issue is whether he brings back Jack Wilshere for Tomas Rosicky, but given that it’s an away game, and one in which we need to set the pace, I’d be tempted to start with the Czech and use Jack if needed from the bench. I don’t think anything will change in the back four, although Monreal for Gibbs might be a possibility as the Spaniard has been given the nod in our last three away games in the league.

I think if we get into them early, the same way we did against United, then we could blow them away. The intensity of our tackling and pressing should garner chances against a team which has only won twice at home all season. The key is obviously taking those chances, because while results have been good, performances have been a little under-par. The idea of going into the final nervous, heart-pounding 20 minutes of this game still needing to score doesn’t appeal in the slightest.

We know that nothing less than three points will do today, Sp*rs play at 3pm so they could add a dollop of pressure to proceedings too. That said, this is familiar territory for us. We’ve been here before, we don’t even need to wear the t-shirt, so hopefully the experience in the side, of this situation and in general, will be enough to see us over the line today. A great performance would be nice, but I’ll take the three points any way we can get them.

Aside from the game, there was some interesting stuff from Arsene Wenger yesterday who, in my opinion, hinted at the kind of spending we haven’t seen from him in the last few years. At his press conference yesterday, he said:

We have gone through a period that was very sensitive, we are coming out of it now, in a much stronger position financially. believe that this club is today in a very, very strong position and has gone through a very sensitive period in a very intelligent way. After that, everything is here to have a great future. We have a good fanbase, we have now a strong financial situation, we have good young players and a squad with a bright future with the quality of the young players we have. It is just to manage it well now.

Before I go on, I understand that some people might think this is just about selling season tickets. I also understand people who say they’ve heard this before and those who don’t have much faith even if he did decide to spend. I think the concerns people have about the manager go beyond what he has or hasn’t spent.

However, I don’t think I’ve ever heard him talk about us being financially strong before. Certainly not in the post-stadium era. And the reality is the landscape is changing. We’ve got a massive increase in income from the renewal of the Emirates sponsorship, there is a new kit deal coming which should add something similar to the coffers, and we’ve got the 19th largest commercial bank in Kenya onside too … *cough*

There was money available to him in January, he refused to spend it believing it could be better spent this summer, and maybe my glass is now half full again, but I do think that we’ll be see something of a busy summer in the transfer market. Perhaps not in terms of quantity, but I think we’ve got the financial firepower to make a statement in terms of quality. For those who say he never spends big, he did in the past, comparatively speaking.

The reality is that we have been somewhat hamstrung by finances and tried to do things a different way. We haven’t always used everything available to us – something I’ve mentioned plenty of times and which has been a source of frustation – but hearing Arsene Wenger talk about our financial strength is a departure from the usual script and, fingers crossed, a statement of intent. I guess we’ll find out this summer.

If you can’t see the game later, we’ll have full live blog coverage as always. Check back later on for a post with all the info or bookmark the default live blog page.

Until then, come on you reds.