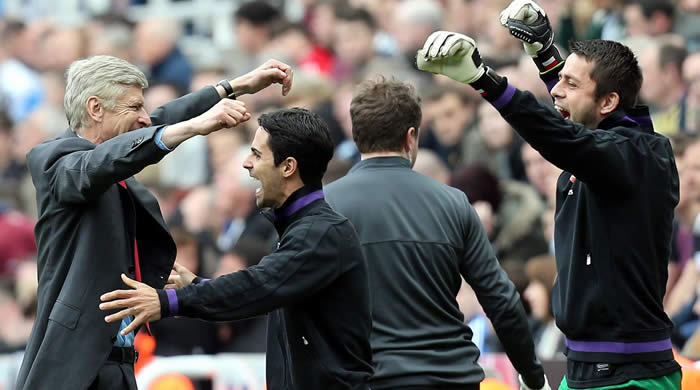 Anyone who tells you they enjoyed any moment of yesterday that came before the final whistle in our game is either a liar or just not very well in the head.

I felt unwell throughout the game, stomach churningly unwell. Once Howard Webb had blown up, it was like I’d been given an injection of delicious morphine. When Theo Walcott bamboozled his way through the Newcastle defence and hit the post just after the news that Bale had scored at White Hart Lane, I had visions of that miss being like a Leicester penalty. It felt like a Newcastle goal was inevitable.

Thankfully, it didn’t happen, we closed the game out, won the match, finished fourth and secured Champions League football at the expense of our neighbours who, let it not be forgotten, crowed a bit too early after beating us at their place in February. Andre Vilas Boas spoke about how we were in a “negative spiral” and with a 7 point lead and 10 games to go it looked like a tall order, in fairness.

8 wins and 2 draws later, 26 points from 30, and here we are. Our spiral – wonderfully illustrated here by @Antouman – was the most positive we produced all season. We hadn’t gone any further than 5 games without a loss for the duration of the campaign, but when it came right down to it we produced at exactly the right time.

You have to give credit to the players for the way they ground out results and to the manager and his assistant for realising that this team needed to change in order to get where we needed to. There was, I believe, a realisation that we couldn’t play the expansive, attacking football Arsene Wenger likes. I think it came down to lack of quality in the squad and the manager cut his cloth accordingly.

Instead of going out to win games, we set out first and foremost not to lose them. The away win at Bayern Munich provided an instant boost after a miserable couple of weeks, and from then on we saw an Arsenal team that defended well and ground out results in a way that I don’t think I’ve ever seen from a Wenger team. Thomas Vermaelen, the club captain, was dropped for Laurent Koscielny and the goalkeeping situation was improved by the addition of Fabianski and the kick up the hole it gave Szczesny while he contemplated life on the bench and, at times, not even in the squad.

I don’t think we can underestimate what a risk the Fabianski move in particular was, bringing back an error prone keeper who had spent a year out of the game with injury, but in the end his record was P5, W5, keeping two vital clean sheets away at Munich and Swansea. As for Vermaelen, he struggled this season, no doubt about it, and when Koscielny came into the team he never looked back.

He’s forged an outstanding partnership with Per Mertesacker, they complement each other brilliantly, but it’s helped by the fact the Frenchman has developed into a quite brilliant centre-half. His performance yesterday epitomised the team over the last few months. He was solid, hard-working, brave and committed, and when Arsenal needed a goal from somewhere he gave it to us for the second year in a row.

Against West Brom last season he hooked home what turned out to be the winner in the 55th minute. Yesterday he hooked home the winner in the 52nd. Similar time, similar goals. If you’ve ever been hit by lightning, avoid standing under a tree in a storm with Koscielny because it strikes twice when that bloke is around. It was hard to see where a goal was coming from, I have to say, grabbing it in a 1-0 from a set-piece, how very Arsenal.

It meant an excruciating final half hour or so. It wasn’t a goal we built on, but became lead we were determined not to lose. Thankfully the home side weren’t up to much but like so many of the games in recent weeks it’s hard not to fear the deflection, the moment of brilliance, the spawny rebound. It never happened, and Sp*rs ultimate misery was compounded by misinformation that spread through the stands about a Newcastle equaliser.

Arsene, and the players, celebrated with vigour at the final whistle, and criticism of that is beyond churlish in my opinion. While there wasn’t a trophy at the end, this was a game with a huge amount at stake. Those who complain about celebrating would be vociferous and vicious about us finishing 5th, and, frankly, after the run-in they deserve to enjoy what they’ve done. I don’t think anybody’s suggesting it’s the same as actually winning something, but it has to be viewed in perspective and under the circumstances it was completely understandable.

We’ve just gone 10 games unbeaten in the league, beaten off Sp*rs to finish in the top four, got Champions League football next season, on the day what is there to not celebrate? Should teams who avoid relegation with a dramatic last day result remain stoic and unmoved by what they do? The league title is the main prize but within the league there are many smaller competitions and we were involved in one yesterday.

In the last three months, I believe we have been remarkably consistent. We won every away game so it’s a good springboard for next season, to transfer that belief into the start of next season. Since February 1, we have taken more points than anybody else in the league. I don’t believe that’s just down to coincidence, just to the fact that the group has grown. This team has grown throughout the season.

And it’s hard to argue with that. Results bear it out and our final league position is the one we deserved based on what we did over the duration the season. Yet there’s still much to do and what we’ve done ought to the very minimum requirement for this football club. Without wishing to put a dampener on proceedings, we can’t forget the dismal cup exits, nor can we ignore the 17 point gap between us and the champions.

I don’t think that’s being negative, that’s being realistic, and while we should all enjoy what we’ve done since that defeat at Sp*rs, we can also want the manager and the team to improve for 2013-14. I was reading back on last season’s post-final game blog, and this is what I said at the bottom:

To be perfectly honest, I’m quite glad to see the back of this season. It can go and sodomise itself with a rusty spoon as far as I’m concerned. We can use the summer to recharge our batteries, take stock of where we are, and then make plans to improve. In the end there was a 20 point gap between us and the champions, and we need to work on closing that.

I feel much the same this time around. While there was a pay-off and release on the final day, I don’t think it was particularly enjoyable throughout. There was too much wrong, on and off the pitch, too much anger, too much frustration and silliness, and it was borne out of what the club did, or failed to do, in preparation for this campaign.

There’ll be those who’ll say it’s Groundhog Day, that we’ll simply repeat the cycle next year, but my hope is that it will be different simply because the financial landscape has changed. If we haven’t used the money available to us, a decision made by the manager, perhaps it was borne out of caution because we lacked a safety net. Now, with a big lump coming in from Emirates, and further funds to be added through the new kit deal, we’ve got the ability to spend bigger and better than we have.

And make no mistake that’s what we have to do. Arsene spoke about how it was great that we wouldn’t be losing players this summer. Although I think one or two will depart we won’t be losing a star (is that because we don’t have one to lose?!), and he’s right to speak about the benefit of stability. Yet stability without additions will mean stasis, we have to progress and improve.

Finishing fourth gives us the platform to attract good players because of Champions League football, the increased financial security gives us the ability to buy those players, and keeping the squad together allows us to take a step forward without having taken two backwards as we have in summers past.

But look, we’ve got a whole summer to worry about those things, to debate and discuss and get wrapped up in the silly season and speculation. For now, let’s take heart from the fact that both on the pitch and off, we can see with much more clarity how progress can be made, and take it from there.