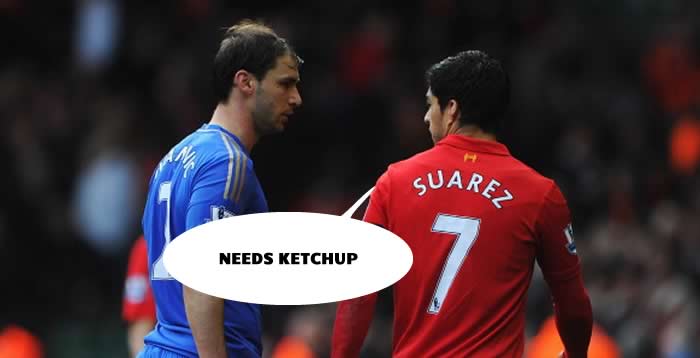 Welcome to a brand new week after what was some day of football yesterday.

Any hopes that Man City might do us a favour and beat Sp*rs were laid to rest by the fact that Man City are a group of players with nothing left to play for and who, frankly, didn’t give a toss one way or the other. When the introduction of Tom Huddlestone changes a game you can tell there’s a serious lack of desire, and when your only option to try and save it, as the richest club in the world, is Scott Sinclair then there’s something really wrong.

Sp*rs wanted it more, it showed, and City’s defence of their title has been little short of abject. It meant that we really needed the Mugsmashers to get something from their game against Chelsea. It looked possible, when they drew level, then unlikely when Suarez handled the ball to give them a penalty, and almost impossible when the 6 minutes of injury time were up. But Suarez scored a late header to equalise and from an Arsenal point of view that could be a very important goal.

Of course, the focus after the game was on the fact that Suarez bit Ivanovic. Quite why this is a surprise to anyone is beyond me. Liverpool bought him in the full knowledge that he was more bitey than your average professional footballer. Or beaver. And handbally too, let’s not forget. What we got yesterday was a showcasing of all his talents. His undoubted quality as a footballer was obvious, the goal was great and the assist for Sturridge fantastic too, but a stupid handball and his attempt to cannibalise an opponent highlighted the dark side of his game.

He’ll probably be suspended for the rest of the season, but the idea that he’s played his last game for Liverpool because he bit somebody doesn’t make much sense when Liverpool were content to buy him for £25m after a similar incident. It’s not a deal breaker for them.

Anyway, from a purely neutral point of view it was tremendous entertainment. From the outrage of Chelsea, coupled with their frustration that the goal came well after the injury time was up, to the Sky reporters trying to bait the managers into talking about the incident, to Rodgers claiming an elbow on Carragher to try and distract from his striker’s lust for human flesh, it was all fantastic stuff to watch.

And it means that Chelsea have dropped points, we stay in third position, the two clubs below us still have to face each other and while Man City’s limp display and attitude will have emboldened Sp*rs, it wasn’t a bad Sunday overall. As for what City’s loss means in terms of the title and and all that, I think it’d be best for all concerned if they won it tonight, went on a massive bender which saw them arrive next Sunday hungover and uncaring. The rest we can deal with as the week goes on.

From an Arsenal point of view, Laurent Koscielny has been talking about his relationship with Per Mertesacker and how the duo complement each other:

Per is a very good player. He reads the ball well. He is clever, attacks the ball and wins headers whereas I can go behind and be quick and cope with the long balls. He is good technically so he is good for the defence. Per is calm on the pitch. He is good for me, he uses his experience, this helps me, and he helps the team.

They were both excellent on Saturday against Fulham, ensuring that a game in which we struggled from an offensive point of view didn’t end up damaging us. Naturally through their defending, but it was a Koscielny assist for a Mertesacker goal that won us the three points in the end.

I’ve long thought that they’re the pairing that works best at the back. The impetuousness of Vermaelen’s defending has, at times, left us exposed, and I think it’s right that the manager did something about it. The captain’s armband is an honour but not a free pass, and ideally it’ll be a positive thing for the Belgian. There’s a lot of football to play in any season, injuries and suspensions open the door all the time, so it’s not the death knell of his Arsenal career as long as he’s prepared to fight for his place in the team.

To my mind there’s been an element of complacency which has affected his game in a bad way. If having to knuckle down and scrap for a start makes him a better player then it’s a good thing for all concerned. In the meantime, Mertesacker and Koscielny know they’ll have to keep playing well to stay in the team, and it’s a more healthy situation than it was.

If there was an element of unfairness that last season’s best centre-half spent too much time on the bench, he’s responded in the best way possible. He hasn’t complained, he hasn’t kicked up, but when his chance came he took it. And that ought to be the example for Vermaelen or any player in that situation.

Finally for today, Theo Walcott talks about how the contract talks made him grow up. They’ve also made him stop performing, which isn’t exactly a good thing at this point of the season. While I think there was genuine happiness at the fact we’d stopped the rot in terms of players leaving when reaching the final year of their contract, people still remain unconvinced that Theo is the guy who merits the biggest pay cheque at the club and all the drama that went with it.

If some of it was borne out of circumstance, he can’t avoid the fact he had a big part to play in that, and the view of his performances will always be coloured by it. It’s like the player who is bought for £30m, it’s not entirely his fault a club is willing to pay that much for him, but there’s a level of expectation that goes with the transfer fee. So far, Theo isn’t coping well with post-contract football and the only one who can change that is him, and the way he plays. Here’s hoping he finds another patch of consistency in the final games of the season.