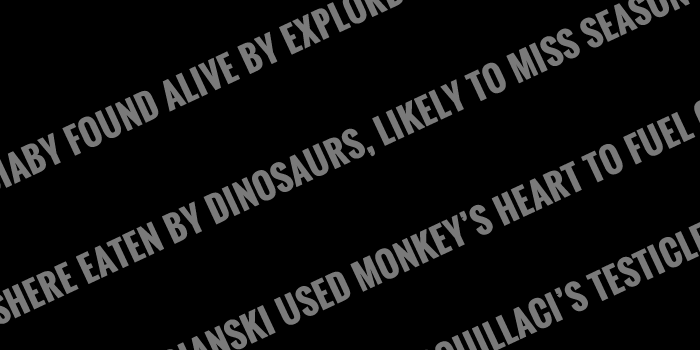 It’s an odd world we live in, you know.

A report on the most notoriously unreliable website of all time gets picked up by the nationals and all of a sudden it’s big news. In a week when one newspaper covered themselves in their own poo after running a false story then getting huffy and irate when people questioned them, it does make you question how the ‘news’ is presented. Is the truth now less important than making sure you get some hits on your website? It would seem so. And since when do national newspapers use bastions of bull as genuine sources?

Another example, yesterday I got an email from a reader who translated an interview from the Polish press with Wojciech Szczesny. He talked about how Arsenal had to avoid humiliation and make sure they they finished in the top four. There were some comments about his own future too, but nothing too groundbreaking as the interview happened before the Swansea game. We ran the story on Arseblog News.

Throughout the day, the same quotes (exactly the same, I should say, because I corrected a couple of words from our kind reader’s translation), appear on all the big football sites. They have the same corrected words, the same punctuation, the whole lot. Now, I’m not complaining, we often take quotes from other websites (although we make a point of attributing them to the source whenever it’s possible), but it just shows you how the football news world works.

As well as being an outlet, we’re a source too. And while we’d never do it, it’s certainly feasible that we could plant an entirely fictitious (but plausible) story and that would get the same treatment. It would be republished far and wide, unattributed, and bought hook, line and sinker simply because of the profile of the websites that would carry it. I call it the Carl Jenkison’s Dad Supremacy.

All of which is a roundabout way of reminding people to take things they read with a massive pinch of salt. Especially when the source of a story is a website that has redefined hit-whoring, continues to run non-exclusive EXCLUSIVES which turn out to be a load of nonsense half the time, and whose commitment to standards is such that they are happy to run content written by people so desperate to get noticed they’ll work for free.

Nobody, whether it’s an aspiring football journalist or a trainee binman, should work for free. I’ll leave it up to you if that makes you question the operation and the standards they work to, but for me I’d trust them about as far as I could throw Neil Ruddock.

Also, there is the whole problem of people reading only what they want to read. Despite Per Mertesacker talking yesterday about how the team watching videos was something they did all the time, regularly, constantly, consistently, and so on, the amount of people who took the view ‘Oh, no wonder Arsenal can’t defend if they don’t watch videos. Why don’t they watch any videos?’ was quite astonishing.

It was almost is they chose not to read that bit because it didn’t suit them. Confirmation bias at its most obvious. Now, in fairness, if you’d asked me if Arsenal players watched videos to help their defending, I’d have said ‘Sure, they sit around and watch old episodes of Mr Ben and Knight Rider’, but still. It was there in black and white, it couldn’t have been more obvious, but people still missed it.

It was all down to the headline, people’s attention span is so short that they can’t see beyond that. Judgement is passed on on that basis, not the actual content. Maybe that’s something we just have to contend with and it will change the way headlines are written. People feel like they don’t have time to read lengthy articles any more. How long will it before an 8 word headline is too long?

I’ve been guilty of it. Somebody sends me a YouTube clip, it opens, I see it’s 4’34 in length and sigh. I don’t want to spend that long waiting for payload. WHERE IS MAN BEING HIT WITH A FOOTBALL IN THE GROIN? We’re all guilty of it to one extent or another, but there’s also a need to ensure that we don’t go too far down that road. A Pot Noodle might be time saving and vaguely edible, but it’s not a slow-cooked dinner with a nice bottle of wine. There’s a place for both but one is undeniably better.

There’s a skill and a craft to writing things people want to read. Yes, there’s a place for short, sharp, to-the-point news articles, but we can’t lose the long-form either. There’s pay-off in that too, stuff you can’t get from a bit of reportage or won’t get from something invented to get website hits. Which is my round the houses, rambling way, of saying that we’re now into an Interlull and the news pickings are slim.

It’s easy to prey on people’s worst fears, to make a guess which, if turns out to be wrong, can be corrected by another EXCLUSIVE which tells you that the player’s new-found robustness means he’s come back from injury much quicker than expected. There’s always an out. But make sure you see it for what it is.

A little step back