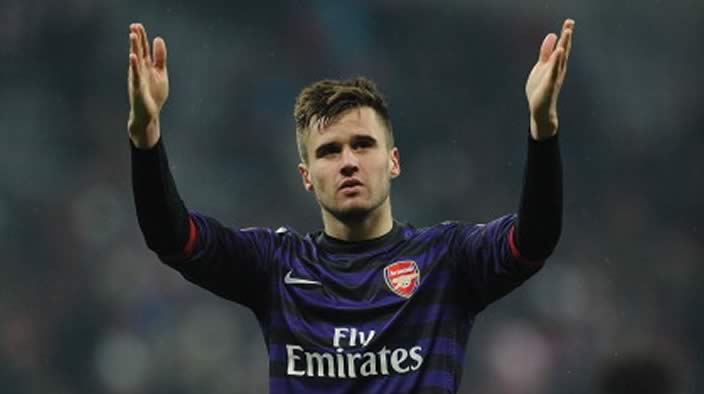 I have to say I rather enjoyed that in the end. Some pride was restored, confidence really ought to be have been boosted, and we beat Bayern Munich 2-0, coming so close in the end to completing the job.

As I admitted yesterday, I was fearful of this game. In the end it was the Germans who were touching cloth when Laurent Koscielny got a late goal to put us within touching distance of the next round. Ultimately it wasn’t to be, we let them get too far ahead in the first leg, but without qualification the performance was the most important thing and there was a lot to like about last night.

While we still found Bayern difficult to break down from an offensive point of view, the early goal from Olivier Giroud set things up nicely. I’m not 100% convinced Walcott wasn’t having a shot but either way the Frenchman was there was bang it home from close range.

After that they came back into it more, as you would expect, and over the course of the game had far more attempts on goal (22 to our 4, apparently). But as a team we defended a lot better than we have done throughout this season. We saw forwards chasing back, midfield working hard and a back four and keeper that looked almost like a unit. Laurent Koscielny came in for Thomas Vermaelen and on this showing the captain is going to have to wait a while to get back into the team.

The two full backs were excellent, Carl Jenkinson in particular showed why there are such high hopes for him, and in goal Lukas Fabianski had a very good game indeed. I was skeptical about his return but he acquitted himself well – although it’s worth pointing out that he had a team in front of him working harder and more cohesively than Szczesny has had most of this season.

I don’t think we were helped much by a referee who erred, not so much on the side of caution, but on the side of Bayern. The offside decision given against Theo Walcott in the second half was very poor, and he seemed very quick to award the home side free kicks yet let our players, Giroud in particular, take a kicking without giving much at all. Anyway, that’s not apportion blame, simply an observation.

As Bayern’s shooting got more desperate – Robben, Muller, Kroos and Gustavo (not Almodovar) all went from close to miles away – we brought on Gervinho and Oxlade-Chamberlain for Ramsey and Walcott. And the Ivorian almost made it 2-0 after a fantastic turn in the box and an off-balance toe-poke which dribbled just wide. It was begging an Arsenal player to be at the back post to turn it in but we were caught on our heels.

From an 87th minute corner won by Oxlade-Chamberlain, Koscielny headed us into a two goal lead, meaning one more would see us through, but although they bottle finals against horrendous people like Chelsea, Bayern managed not to do it last night, held onto the ball deep in our half and saw out the game to go through to the quarter-finals.

In the end a valiant effort by the Gunners, and while there are plenty of regrets, there are a lot of positives too. Arsene Wenger said afterwards:

We went close and I am very proud of the team. As well I am very disappointed for anyone who follows Arsenal that we could not get that third goal.

We had a plan that we respected tonight, it went for us on some occasions but at least we have shown that we have the quality to be there.

And look, there is plenty to be proud of. Nobody, and I include myself in that, gave us much of a chance but we beat a team that hasn’t lost since 1876 and kept a clean sheet against a side that last failed to score at home just under 12 months ago. It is an excellent result and as I spoke about beforehand it gives us exactly the platform we need for the final ten league games of the season.

While the manager gets plenty of stick when things go wrong, he should get some props when things go right, and he made two big calls for last night’s game. He dropped his number 1 keeper for a guy who hasn’t played in over 12 months and showed his captain that poor performances will mean you get left out. Both Koscielny and Fabianski played very well and were a big part of the defence that kept that clean sheet.

On that basis I’d have no real problem if he kept faith with them for the game on Saturday and, if they do well there, then on an ongoing basis. You can’t bring players into the team in the hope of changing things for the better then turf them out of the side when they contribute in a positive way. It should now be up to Szczesny and Vermaelen to work their way back into the team, let them feel the heat of competition and hopefully it’ll be a positive thing all round.

Last night showed us how every game for the rest of this season should be approached in terms of collective effort. It sounds redundant almost – because it should be second nature – but the truth is the goals we’ve conceded and the games we’ve lost have been, for the most part, down to us not doing what we did against Bayern. Players are not tracked, midfielders don’t go the extra few yards, the defence doesn’t look organised and disciplined like it did last night.

Although I thought he had a quiet game in general, it’s noticeable how Arsenal press the opposition much higher up the pitch when Tomas Rosicky plays. It’s a small thing but it sets the tone for the rest of the players to follow, and his experience was handy too, a clever and cynical foul on Robben in their half prevented the kind of on-the-break danger we’ve been far too susceptible to. Sometimes you have to take a yellow card; look at Lahm on Cazorla in the second half, it was the exact same thing and at times we’ve been lacking that.

I do realise one win doesn’t solve all our problems, not by a long shot, but if we perform like we did last night, with the same desire, the same will to get a result, then I certainly give us a chance of finishing top four. There are still 10 games to go, that’s 30 points in total, and if we put the pressure on those above who knows what might happen?

Yes, it’s frustrating that it takes poor circumstances to spark that kind of display but that’s not an issue for today, or the final games, it’s hopefully one for May and which we need to look at in the context of a full season.

For now the players ought to be boosted by a very good win, by keeping a clean sheet, and reminding people there’s a bit more to this team than we think at times. We’ve seen Arsenal do this before, step it up in a big game and fall back into the old habits too soon afterwards, but the mindset must change. Every team we play now are Bayern Munich, every goal we don’t concede gives us a better chance of winning a game, and while there are still things wrong, every three points gives us a better chance of fixing it when the time comes.

Finally for today, if Carl Jenkinson’s performance wasn’t enough to bring out the love, then his brilliant post-match interview on Sky certainly will. Pressed by the noxious Geoff Shreeves about Arsenal’s years without a trophy, Jenkinson’s “I don’t want to talk about that tonight” reply was that of a proper Gooner, and a sensible head who won’t fall into the media traps.

Back tomorrow with an Arsecast.