It’s easy to describe what makes Santi Cazorla so good; he possesses two great feet (to the point which it is almost indistinguishable which one is stronger), is a deadly great long-range shooter and is blessed with superb vision and passing. But what’s more difficult to describe perhaps, is the role Cazorla is playing.

Numerically it’s obvious; he’s Arsenal’s number 10, playing off the main striker and the one that’s given the task of linking up midfield to attack. But there are subtleties to his role that is rarely given as much coverage and are as such, less easy to explain.

Cazorla has a wonderful understanding of defensive shape, often seen tracking back as the first line of defence and covering for team-mates when out of position. Indeed, Arsenal are in many ways lucky that Cazorla was available to sign at a time where they were undergoing huge defensive changes because the way Cazorla has been brought up in Spain, taught defending using the Dutch principles of through-marking, makes him the perfect spearhead for Arsenal’s closing-down. You also have to look at the reinvention of Mikel Arteta to see the strength of this education; Arteta says he forgot the little nuances of the holding role he learned to play as a kid at La Masia because he was used as an attacking player at Paris, Rangers and Everton but has since had to relearn it at Arsenal. It’s worked brilliantly so far.

Understanding Cazorla’s defensive responsibility helps us to understand his overall role. In previous seasons, Arsenal would press up the pitch therefore the formation could more easily be described as a 4-2-3-1. This season, however, the two wide players drop back quicker and deeper than Cazorla and as such, the formation morphs into a 4-4-1-1. When the ball is won back – which Arsenal have done superbly this season – Cazorla is usually the first to get it, springing counter-attacks. That was illustrated perfectly against West Ham United where, following a broken down set-pieces, dropped back from his position up the pitch to play a wonderfully deft pass to start the move for Arsenal’s second goal.

Cazorla describes his role as a “second-striker” which in some ways is not too dissimilar to Cesc Fabregas although as we’ve ascertained, their defensive contributions are slightly different. In attack, however, they more or less have the same influence on the way the team plays but Fabregas undoubtedly bore greater burden. He didn’t have the team-mates to back him up – not necessarily in terms of quality, but in terms of maturity. The tactical demands of the old system are far greater than it is now.

That contrast can be displayed by the fantastic partnership Cazorla has stoked up with Lukas Podolski and in particular, Arteta. Together, the pair have combined 224 times in the league this season – that means a fifth of all the passes they have completed have been to each other. Cazorla is given complete freedom to pick up the ball where he wants to, “to help the team find and create space where you can cause damage,” in Arteta’s words. Cazorla is unequivocally the team’s playmaker, the one who links up midfield to attack, but the next step of his evolution will be to add goals to his game.

Because the position he starts – close to the main striker – allows him to get into good goalscoring positions. Indeed, he’s taken the most shots of any Arsenal player this season at 4.1 per game (29) but has only delivered two goals. Perhaps, it’s because he’s doing too much. Because despite Cazorla’s main task being to play incisive, penetrative balls, he’s still in the top 5 Premier League players in terms of pass completion rate. But he’s also in the top 5 for shooting too! Over time, he will find this balance and as others step up creatively. Wenger says: “Cazorla will get a few. He gets in good positions and does not always finish. But he looks like he can score goals.”

The effectiveness of which Cazorla plays the free role, however, can only be facilitated by the work done by man in front of him. Usually it’s been Gervinho but more impressive has been Olivier Giroud who works tirelessly to occupy the centre-backs and opens up space for Cazorla. Gervinho is less orthodox and there is neat way to sum up the difference of the two strikers’ approaches: Giroud makes space for the team with his runs while for Gervinho, the team has to make space for his runs. 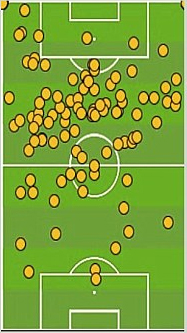 It’s understandable why Cazorla might prefer Giroud. Looking at his touches against West Ham (image courtesy of Daily Mail and Opta), by occupying the centre-backs, Cazorla is allowed to pick the ball up freely in the final third. By working in tandem – rather unnaturally one might say because they start off close but drift away from each other* – it makes him harder to marker. Cazorla can unsettle defences by moving backwards and then bursting forward unexpectedly to get into good scoring or passing positions. It’s countless the number of times he has found himself unmarked on the edge of the box to shoot (especially against Manchester City where he spurned a couple of cut-backs) or to thread a through-ball.

Tactically, Santi Cazorla’s role is a continuation of what we are seeing in the modern game. Space is limited and as such, ball retention is key. The compact nature and defending in front of the area means the natural playmaker has effectively ushered the into a stealth position. They must possess great technical ability and dexterity of movement to take advantage of limited spaces. And that’s what makes Santi Cazorla so good.

*To get a better understanding of the role, I’d refer you back to this explanation of Tomas Rosicky’s role last season.

“When we have the ball I am starting quite close to Robin [van Persie] up front, and after that I can come a bit deeper and stretch the pitch out,” says Rosický. ”I can’t say for sure whether this has made the whole difference, but I would certainly agree that what the boss is asking [of me] at the moment suits me nicely.”