There have been two stand-out players for Arsenal this season and bar 9 minutes against Stoke City in which Santi Cazorla was withdrawn; Arsène Wenger sees them as undroppable. Certainly when Cazorla delivered the definitive kick of the game for Arsenal’s third, West Ham’s failure to get something out of the game may have stemmed from their inability to stop Arsenal’s two most influential figures. Mikel Arteta was once again superb in front of the defence, moping up danger and then playing the ball out with efficiency while Cazorla dictated proceedings before finding the net late in the game.

However, the game instead, might have been won by Arsenal’s defence; because The Gunners, in the second-half, ceded control of the midfield and that put the defence under pressure. However, they held firm and were able to punish West Ham on the break.

The two halves carried distinctly different patterns: Arsenal controlled the first, largely given room to pass at the back while West Ham came back into it in the second. That West Ham stood off went against Sam Allardyce’s claim before the game to put Arsenal under pressure from the start. “So, how do you play against them?” he wrote in his Evening Standard column. “Firstly, you have to stop their players from doing what they want — our players, particularly the front men, have to do the stuff they’re never as keen on, such as defending by closing down. After that, you have to seek out ­Arsenal’s weaknesses. They have fewer than most but they have some because we all do.”

It’s fair to say the gameplan really took off in the second-half when West Ham stretched the game and committed men around Carroll. He won most of the knock-downs too – 17 out of 25 – but Arsenal were alert to the second-balls and shut down West Ham effectively. The covering from Carl Jenkinson and Per Mertesacker especially, was superb.

In the first-half, The Hammers preferred a more conservative approach which is a bit of a surprise considering the last three opponents – Manchester City, Chelsea and Olympiakos – had much joy pressing up the pitch and putting Arsenal’s two key men, Arteta and Cazorla, under pressure. On the other hand, perhaps that’s not to be unexpected because the aforementioned opponents are all Champions League clubs and West Ham don’t carry the same resources to man-mark Arsenal without leaving spaces in other areas of the pitch. Instead, what they did was generally effective. They defended deep and although they let Arsenal’s playmakers have time on the ball, it seemed it was a virtue by a lack of any more pitch room that they denied Arsenal.

Certainly, if you look at Arsenal’s first goal, Olivier Giroud almost had to score right in front of the goalkeeper. There was just no room behind. The movement and determination from Giroud was superb although more notable might be from where the goal stemmed; Mohammed Diame turned from hero to zero as he lost possession, having scored the opener and Arsenal quickly made the transition from defence to attack count.

Indeed, Arsenal scored their other two goals from the break indicating how difficult it was to find room in the final third. But if there was ever no doubt that they would, that’s because there is a purposefulness to Arsenal’s interplay this season and it seems like every touch is designed to hurt their opponents, whereas in the past, they might have passed for the sake of it. That’s typified by Santi Cazorla who roams the pitch looking for space where he can make a difference and crucially too, he carries a goal threat.

His propensity to shoot reminds me of a quote from Guillem Balague on Frank Lampard who, like Cazorla, has been criticised at times for over-shooting. But there’s more method to his apparent selfishness as it opens up space somewhere else for someone else. A reverse pass to Giroud when the West Ham defence though he was going to shoot illustrates that.

Guillem Balague: Some people say Frank [Lampard] shoots too often, but he says he does it to force a defender to come and block him. If they don’t, he has a crack and if they do, then he can slip in a forward in the vacant space.

One of the reasons for Arsenal’s first-half dominance can go down to the performance of Aaron Ramsey in the middle. Previously this season, he has started on the right-flank but when an injury to Abou Diaby against Chelsea forced to him to play alongside Arteta, he failed to impress. His selection in the middle over Francis Coquelin this time might have been to balance the team technically as Wenger chose to play with three strikers (Podolski, Giroud and Gervinho). But there were signs, after his cameo against Olympiakos, that he is getting his confidence back and in particular, his taste for the impudent.

Against West Ham, he drove up and down the pitch and linked up well with Lukas Podolski and Santi Cazorla. The improved display might partly be down to the slight reshuffle to his positioning. In the last three games, Wenger moved Arteta from the right of central midfield, where he started the season, to the left. It’s not quite explainable as to why he made this change (although this piece might provide some explanation). Against ManCity, it’s probably because he wanted Arteta up against Yaya Toure while in the other games, perhaps he wanted to make more out of Arsenal’s superior combination play on the left.

At Upton Park, he moved Arteta back to the right-side and used Ramsey on the left. It proved something of a mini-catalyst to the Welshman’s improved performance. Because, there’s an assertion that in picking the ball from the left, Ramsey’s body position is more open and more towards play. From the right, he tends to pick the ball up his back to goal. That can be displayed by his pass charts against Chelsea although we should probably take into account the different approaches. Nevertheless, against West Ham, his passes are generally more direct; against Chelsea, he often looked backwards first. 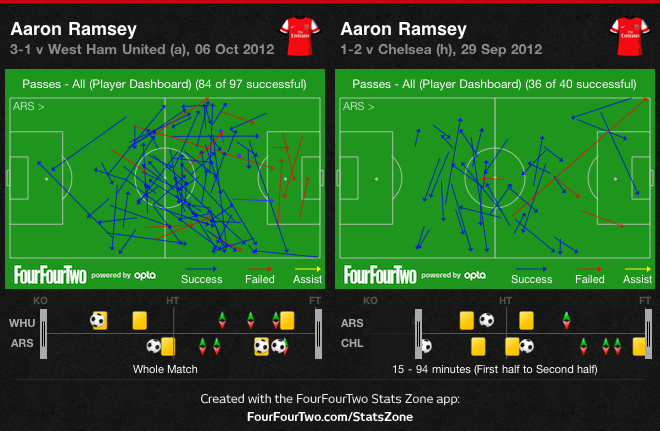 It seems for Arsenal as a whole this season, and not just for Aaron Ramsey, that small things are making a really big difference.