I am tired this morning. This is nothing to do with me but entirely the fault of Blogette who forgot her keys going out to work yesterday evening so I was awoken at 2am with a phone call.

I was, I have to admit, sorely tempted to just go back to sleep but that parental guilt kicked in. What if she were attacked by a roaming bear while shivering on the doorstep? I know, there are very few roaming bears in this part of Dublin but you just never know, do you? I’d have to suffer that for the rest of my life.

“Remember the time you wouldn’t let me in when I forgot my keys and the bear got me?”

“WHY DO YOU KEEP BRINGING THIS UP, STUMPY MCNOFACE?! JUST LET IT GO!”

In the end said situation was avoided by me getting out of bed at 2am and attending to the door but I did it in a tremendously grumpy fashion. I might have one of those electronic doors installed, retina scan locks and all that. Which would mean forgetting her keys would be impossible, unless her eye was taken out by a rampaging Griffin. Oh, there’s always a downside to every plan.

Anyway, away from my domestic toils and tonight sees lots of Arsenal players playing for their countries. There’s a full list of who’s doing what right here, and Ireland play Germany this evening. A game I will be attending thanks to my friends at Paddy Power. That means I get to see the Mert and the Pod up close and even better news is that Robbie Keane is injured so there’ll be none of his mallet-headed cuntery this evening. Apparently he was injured after a tackle by Paul McShane which just goes to prove the old adage about monkeys and typewriters. He had to do something useful at some point in his career.

Germany boss, Joachim Löw, reckons Podolski’s move to Arsenal has been a good thing for the player, saying:

I always said it would be a good move for him. I think the progress he is making at Arsenal is very positive. He always has such a positive energy about him and is benefiting from his experiences with Arsenal.

He’s established himself nicely on the left, works with the attacking side of the game, and really puts in a shift defensively too. There’s much to like about the bus-hopping German and he looks to be enjoying himself here too, if the pictures of him on Mertesacker’s Facebook page are anything to go by. Anyway, it should be interesting to see him tonight, I think he’ll score too. Then do forward somersault before shooting off an imaginary gun. No, wait. ARGH.

Moving on now to Mikel Arteta and 7amkickoff has written a piece for Arseblog News showing why, statistically, Arteta should get a call-up to the Spanish national side. As I said yesterday I’m selfishly happy that he doesn’t have to go off traveling and playing and coming back tired, and all that, but it does seem to be a real ambition for him and such is his form and consistency it’d be more than merited if it did happen.

And just when you thought you couldn’t like the guy any more, he talks about how he, as a senior player, has passed on to younger players the same advice and treatment he got from his idols – Pep Guardiola and Luis Figo – when he was a youngster at Barcelona.

They were people who took the game really, really seriously and they were trying to help their teammates and they were brilliant with us.

I was only 16 and they would really look after us and you see how nice it is when it is coming from someone like that.

You felt really good being treated like that, why would you not do it to other people when you have the chance to help them? That’s what we try to do with the young lads here.

What an absolute dude. When you consider the image most people have of your average professional footballer is a faintly racist, adulterous, ostentatious, light-footed, slippery-fingered, wonky driving cockbadger with all the humility and decorum of a lottery winning megachav, it’s nice to see a guy whose decency shines through. I think, for the most part at Arsenal, we’ve got a good bunch of players and a decent group of human beings, but you’d hope that the young players who are savvy enough to pay attention to, and learn from, Arteta will remember that and do likewise later in their careers.

Some, no doubt, will pay little attention, and that’ll be a shame for them. One day hyped as the next big thing at a club like Arsenal, the next you’re ploughing a furrow in the Championship or lower, crying into your Nandos about how life is so unfair, but that’s their loss. Those that want to learn from Arteta, and others, will get the benefit of it even if their career takes them away from our club. Apropos of nothing, a headline from Arseblog in December 2008:

Y U NO LISTEN ARSENE? Etc. Anyway, better late than never. Not much else going on so another trip down memory lane to finish us off today. In the picture below you see a happy Gilles Grimandi and Mark Overmars and a very unhappy Robbie Savage as Arsenal score against Leicester. And any picture with an unhappy Robbie Savage in it is a good picture. 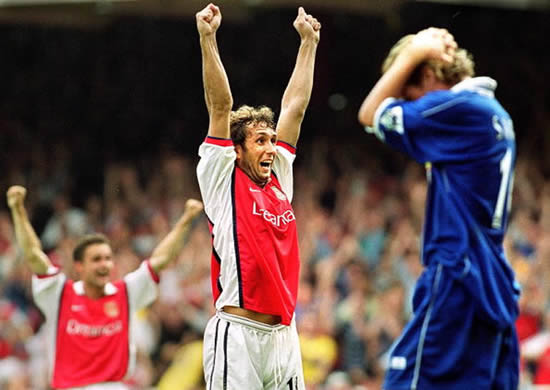 No Arsecast due to Interlull, sorry about that, but normal service will resume next week. Have yourselves a good Friday, back tomorrow with a post-Ireland v Germany review of sorts (and probably some kind of hangover). Till then.