Interlull: a cup of scald and some Arsenal

I grow weary already of this Interlull and it has barely begun. Plus it’s getting colder and darker in the mornings and that’s also annoying. The sooner I get to live in my dream house in a place where it’s always warm the better. My postal address will be 7, The Equator, but the postman will only be admitted if he’s delivering cases of rum. He only ever brings you crap you don’t want the rest of the time.

Still, we’ll muddle on through, as we always do. That famous Corinthian spirit seeing us through the dark and weary times until a light appears at the end of the tunnel; the light of the football train which sustains and nourishes us with its mixed metaphors and clumsy imagery. Yes, some might be driven demented with the lack of Arsenal, but after a week long Twitter squabble about whether or not the tea-lady’s salary is too high in this current climate, how we can take steps to make her a more productive member of staff and if that bonus she got for having extra Custard Creams was sensible fiscal management, everyone will be ready for real football again.

[As an aside, the tea-lady’s salary is benchmarked against those throughout the footballing industry and although some will feel she ought to have a larger urn from which to make and dispense her brew the club feels that the £960,000 per year she’s paid represents good value for money]

There are bits and pieces this morning. After yesterday’s post about Sagna and Jenkinson, the Frenchman has expressed his delight at making his return in the U21 win over Reading on Monday night. He says:

It is amazing to be back. I have been waiting for this moment for five months. When you have such a big injury once, you take it, but twice is hard. In my mind I was a bit sad, but the next day I was ready for the challenge, which was to come back stronger and I am in a good way today.

Whatever doesn’t kill you, and all that, and hopefully he’ll stay fit for longer, something which would be helped if people didn’t keep, you know, breaking his leg and stuff. He also had some kind words for the man who has stood in for him, Carl Jenkinson:

He has been really good, and has learned a lot. He is a bit more confident with the ball, and is very solid as a defender.

He brings a lot to the team, and I am very happy for him because he is a hard worker, a very good guy and is going to be one of the best.

That England are trying to nab Jenks should be of no surprise, although their methods might leave something to be desired. Sagna also paid tribute to the tea-lady without whom his recuperation would have taken far longer. That’s the benefit of having a high quality person in that role. They know when a player needs an extra sugar, when they they might need to pick up a pick up Penguin or when something from left of field is required and a plate of Jammie Dodgers is set down with a kind smile and a knowing glance.

Although there isn’t another U21 game until the 22nd of this month (2 days after our trip to Norwich), there’s a suggestion from Terry Burton that another match will be arranged to help the recovery of Jack Wilshere and, I’m sure, Sagna too (making the assumption that Norwich is a bit too soon for him). There’s also the Capital One Cup at the end of the month and a Champions League game against Schalke, so it’ll be interesting to see how soon the manager recalls the Frenchman to the side.

Meanwhile, Per Mertesacker (who will be in Dublin this weekend as Ireland play Germany, talks about how much he likes life in London. There were gasps of astonishment earlier this week when pictures emerged of Lukas Podolski getting the bus, of all things, but clearly our Germans don’t care about such things. A bus takes you where you want to go. Sure, some of them have wee running down the stairs but that’s just part and parcel of public transport.

Maybe it’s because your typical footballer these days would drive his gold-plated monster truck and double park on top of an old lady’s dog outside the local shop rather than take public transport, but I think it’s refreshing to see. I suspect Mertesacker, when in Dublin, will be hopping on the old 123 to visit the Guinness brewery before taking a Segway tour of the Phoenix Park. The idea of Per on a Segway is brilliant, it’d be like watching a tree with wheels go about the place. And that’s a rare enough sight, you have to admit.

Beyond that, not a great deal else going on, but to finish, I found this picture on my travels yesterday. The original “He scores when wants”, not directed at Jazzhands van Cuntalot, but at Liam Brady. Who then promptly left us for Juventus. So the lesson here is not to sing any songs or make any chants which make reference to the player’s ability to score on demand. 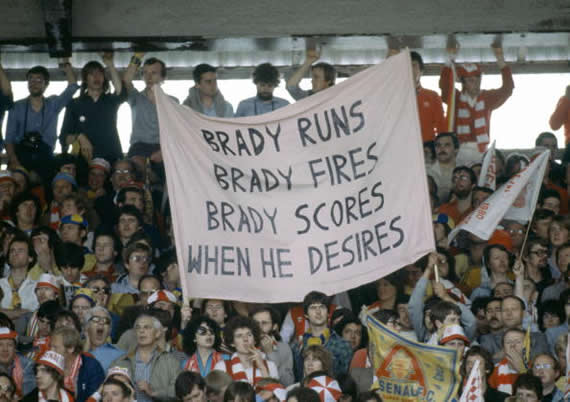 Previous articleThoughts on Sagna and Jenkinson plus Olivier’s dirty dozen
Next articleInterlull: Cazorla loves ‘captain’ Arteta, finances and other guff