It probably says something about the relentless coverage of the modern game when a substitution can generate days of headlines and fall out. In this respect, we see how the modern media works. They can forge subplots and spin offs to furnish another day’s worth of sales and clicks – such as the unbelievable scenes as the captain visibly shakes his head! The horror! The story then grows tentacles, as the microscope zooms in ever closer. This must be revealing of a deeper unrest, surely?

Then of course, the club is forced to fire fight and release statements with the intention of calming the PR waters. The denials then provide another raft of website fodder, ravenously consuming ever more clicks. These rebuttals are always reported in a curiously detached way, “Robin van Persie was moved to deny claims of dressing room unrest.” Claims of course that now somehow no longer belong to the very organ that made them in the first place.

In this sense, the press constructs a synthetic reality – what Baudrillard referred to as the hyper-real (yes, I am pretentious, please don’t feel the need to point it out to me) that many of us buy into. Now don’t get me wrong, I seek not to defend the decision. At the time, I shared the exasperation of pretty much everyone when The Ox’s number was called and thought it a baffling change. I just think it’s important to see a little wood in those trees in the days of hyper furore that have followed. 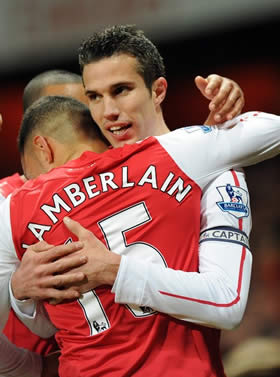 I have to say I don’t really buy Wenger’s reasoning that Chamberlain was cramping up. I sit in a decent position in the stadium and I didn’t see evidence of it myself, nor have I seen any illuminating footage to support the supposition. If you’ll excuse a little amateur cod psychology, Arsene seemed pretty tetchy and defensive about being taken to task over it. But I don’t think it was the removal of Chamberlain that was revealing so much as Ferguson’s reaction to it. He instantly changed up his right hand side and within six minutes it was a move from that very area of the pitch that won him the game.

I think that probably reveals a difference between the two managers. Wenger’s substitutions are often prescriptive and decided before kick-off it appears. Ferguson will appreciate an in-game situation and react to it. There again, one could argue that it was probably never in the plan to replace the ailing Djourou with the raw Nico Yennaris, but that was a change that worked incredibly well. Well enough you’d imagine for Yennaris’ stock to have risen.

What I’m trying to say in a roundabout way is that, whilst undoubtedly not one of Arsene’s better moments, a little perspective is required. One only need look at some of the reportage of Chamberlain’s signing in the first place to see that allowing the press to dictate hyperbolic reactions to you is a fool’s errand. It was a decision worthy of scrutiny and, ultimately, criticism, but it probably doesn’t have the far reaching implications many will have you believe.

Don’t get me wrong. I’m not trying to be superior or tell anyone how to be a supporter or latently making excuses. I just think it’s important to appreciate the 5,000km of grey area wedged between the black and white many are so fond of. I felt the need to say that because, if I have learned one thing this week, it’s that a lot of fans will absolutely not accept any scrutiny. Last week I drew some criticism – not all of it undeserved – for labelling our support as ‘schizophrenic.’ I accept that the accusation was a tad generalised, but some of the feedback I got ranged from a tad precious to implicitly threatening.

Supporters are not responsible for results and have every right to criticise. But call me naïve; I also still think the fans are one of the biggest parts of a club. So I don’t think it beyond the realms of all reason to pass comment on them as part of the fabric of the club. That’s not to say the critic is purporting themselves to be any better or more superior a supporter – the same way that most of us aren’t really angling for Arsene Wenger’s job when we ask, “why in the name of blue fuck have you just hooked our best player?”

It just strikes me that those of us that offer criticism should be willing to accept some too. It goes back to something I’ve said on these hallowed pages before, everybody needs to be told they’re a cunt once in a while. Except for me. I don’t need to be told because I already know. Plus, I’m probably just plain better than you are anyway.

Moving on and there’s another trend I’ve noticed emerged this week. Once again, stories have been doing the rounds of Arsene Wenger being linked with the manager’s post at Real Madrid. I’ve also seen a repeat of the story that Paris Saint Germain lifted their skirts in Arsene’s direction again prior to the appointment of Ancelotti. I have to say I have observed that these stories have a tendency to resurface whenever the manager comes under sustained criticism. So whilst the wily old codger’s assertion that the press “create fear” for the supporters is not incorrect, he seemingly uses them for his own ends too.

The FA Cup returns this weekend and I really hope we take the competition seriously. Though I am certain Arsene is only responding to pointed questions, I’m not sure I’m comfortable with the consistent reinforcement that it’s not very high on our priority list. We all know that the top 4 is the be all and all and most of us accept it; even if we do so grudgingly. I often see the question posted on message boards, “What would you rather? Finish in the top 4 or win the FA Cup?” To which my response is, “Why do we have to choose?”

The only discernable reason for not going for both would be that our squad isn’t deep enough to handle it. If it’s the case that the manager doesn’t trust the depth of our squad to maintain multiple assaults, then really that should be questioned. The top 4 is more important to our long term ability to compete –most of us know that. But the boost in morale a trophy would give players and supporters can’t be underestimated. The gusto with which we took to the League Cup last year shows the manager knows that too.

I think come May, a top 4 finish would be treated with relief. A top 4 finish and a trophy would be greeted with delight and cautious spells of optimism may even break out! It would also go some way to removing the sense of Groundhog Day that I think supporters are experiencing. Boredom is a fertile ground for discontent. The devil will make work for idle vocal chords to boo and all that. I think we can and should make a go of this competition without apologetically diminishing its existence every five minutes.

O.K. That will do for this week. Be sure to check back again next week to find out exactly what you should be thinking. LD.