Greetings, from the most environmentally friendly Tim Stillman Column yet, powered as it is entirely by the smug sense of satisfaction I get from watching John Terry’s putrid goblin face eating turf. Perhaps it’s about time those odious Chav cunts stopped singing about mowing the meadow and actually started doing it, so that their abomination of a captain wouldn’t have to get down on all fours and do it with his teeth.

It’s fair to say there’s pretty much nothing in life I enjoy more than “beating the crap out of” those horrible fuckers. But watching John Terry reduced to pretending to lose his footing so as to avoid the humiliation of forlornly chasing van the Man was the pineapple on the succulent, juicy gammon steak. I laughed so much I nearly got a hernia. With the goings on of the last fortnight, Terry’s pride has been severely wounded. I hope it bleeds to death.

You’ve seen the famous court scene at the end of Scent of a Woman right? When Al Pacino goes loco at a bunch of snivelling little private school shits? I’m tempted to lace the remainder of the column with a similar style of invective, “And Cashley, Roman, Didier, wherever y’are, fuck you too!” However, I figure I should stop now. If I allow my tongue to become anymore acidic, I shall be pissing vinegar for a week. Though that could afford interesting metaphorical opportunities should I get the urge to utter the phrase, “I don’t mean to piss on your chips.” 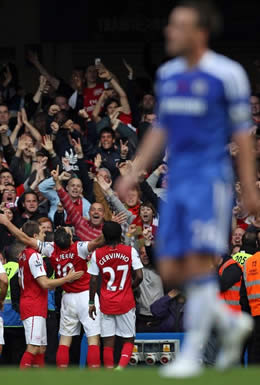 Anyway, besides the undeniable sense of smugness, there was plenty to be pleased about “footballistically” to borrow an Arsene-ism. One of my prominent gripes against the team in the last few seasons has been a lack of in game intelligence. Appreciating the pattern of a match whilst it is in situ and amending our play in response to any of our opponent’s nuances. After the first five minutes, I felt we were in for a very long afternoon; with the likes of Cashley, Mata and Sturridge slaughtering both full backs.

But Djourou and Santos altered their play so as not to be caught so narrow, with Song and Arteta shuffling gamely in front of the defence to plug any gaps. I’ve written in previous weeks about the blossoming partnership between Ramsey and Arteta and that combination truly came of age at the Bridge. As it was, I thought we looked in control at 3-2 and were unfortunate to be pegged back to 3-3 such was the fortune in Chelsea’s equaliser. Borne of a mixture of officiating incompetence in the failure to award a foul against Lukaku and serendipity in the deflection off of Song.

I think at that point we all feared the worst. But to show the resources to score twice more in the final stages, rather than crumbling like hobnobs in tea was most pleasing. Admittedly, there was good fortune in plucking a fourth goal via Malouda’s terrible pass and Terry’s lumbering. But as I said, I think we were owed that slice of luck given what had proceeded for Chelsea’s third.

There has been a lot of talk about the games between bigger sides producing a glut of goals this season. I think one of the reasons that has possibly been overlooked is the comparative youth of goalkeepers currently deployed by the top sides. United and Arsenal have opted to bring through talented young keepers in de Gea and Szczesny. Whilst they are talented custodians indeed, neither is immune from the rashness that inexperience can produce. Szczesny is a positive, sweeper of a keeper which a team like Arsenal needs due to the height of our defensive line.

But he doesn’t always get those right and he was rather lucky not to have been sent off on Saturday. Meanwhile, Chelsea are trying to operate a high defensive line with a couple of relatively slow centre halves and a goalkeeper terrified of leaving his line. A ‘keeper is often seen as a somehow separate entity from the back four- a confusing and irritating error often made in football punditry. This is why I’ve always labelled Arsenal’s notorious defensive unit as “the famous back five” with Seaman very much included.

Despite the euphoria of victory at Stamford Bodge, I think the Marseille game produced reason to temper optimism ever so slightly. One of last season’s big failings was the inability to reproduce any kind of intensity or focus after a big result. On Tuesday night’s evidence, that’s still to be addressed. Ultimately, the big teams put big results to one side, turn up for the next match, clock in, grind out a win, go home and forget all about it.

For instance, the fixture immediately following victory at the Bodge in the unbeaten season was at home to Charlton. Arsenal did not play with any great vivacity, but they won the game 2-1 and moved on. A crucial three points that, in retrospect, is now barely a footnote in a remarkable season. But such results were the constituent parts of something that is remembered forever.  But now, it’s almost like we get a bit giddy, much like a League 1 or 2 side that performs a giant killing or goes on a Cup run. Their league form invariably suffers because they lose their focus.

Even in second gear, I think Arsenal win that game on Tuesday night. The other problem it could produce is that the Olympiacos game, our final group match, will almost certainly have something on it – even if it’s just the need of a solitary point to win the group. This affects our ability to rotate completely. Having gotten a pretty tough Carling Cup draw against Citeh, the hope would’ve been that we could put out a very strong Carling Cup side, knowing that none of the first team need even get on the plane to Greece a week later. We might just have unwittingly compromised our ability to have a good tilt at the League Cup.

It might all sound a bit melodramatic, but I guarantee you these thoughts will be swilling around Mr. Wenger’s head as he nurses his evening Rioja. Meanwhile, his boss Mr. Kroenke has been in town, responding to calls for greater visibility, tipping his Stetson to all and sundry and even, gulp, speaking to the press! Kroenke made some quite ominous comments with regards to ownership of Premier League clubs, with reference the Glazers. He seemed to imply that English supporters might have to become accustomed to a shifting, more stateside philosophy on club ownership.

I certainly think there to be a clash of philosophies here. Sports are governed in an entirely different way in blighty. In the States, there are salary caps, no relegation and a greater sense of shared resources. I think the rather less regulated culture of the English Premier League has bamboozled the likes of Lerner, Hicks and Gillett. Stan’s comments appeared to imply that the Premier League may soon be bending to the will of the stars and stripes.

Which is largely what English governments have done in the political arena. So expect the Premier League to start “sexing up” documents provided to FIFA to prove La Liga is on the brink of waging a sensational war on the MLS. Naturally, we’ll pre-empt that by sending over wave after wave of Shawcross’s and Alan Huttons to scorch the La Liga landscape. The conflict will be given a snappy acronym by the media. The War Against The Spanish. Or TWATS. So until I see you on the front line, keep it Goonerish. LD.