It may not have escaped your notice that it’s Monday. The even more observant among you will have realised that that Stillman fella doesn’t usually pen his overly wordy insights on these pages until a Wednesday. Well, I was in Italy until Thursday evening last week. If you don’t like it, I’ll refund you for a future column …

Before reliving yesterday’s unmentionable humiliation, a few words on the trip to Udine, which was one of the best European journeys I think I’ve ever embarked on with the Arsenal. The affability of the Udinese fans made the trip most memorable indeed. Udine is not the most raucous of cities; indeed we had trouble finding anywhere that dispensed sweet, sweet booze when we arrived on Tuesday evening. However, having stumbled across the only open bar within walking distance, our first beer had barely touched our gullets when a group of Udinese fans came to our table with a bottle of red.

We proceeded to polish off a few bottles and communicate in broken English together until around 2am. We were treated to free food, good company and, most importantly, free drinks. That sense of hospitality pervaded the whole visit. Come Wednesday afternoon, when the 38 degree heat necessitated we cease our pottering for a bottle of prosecco (naturally), we were again indulged in conversation by the locals.

Even post match, with the result secure and Arsenal having knocked Udinese out of the tournament, their camaraderie didn’t desert them. A throng of home fans offered to call us a cab to help us get back to our hotel in lieu of a local bus service which had stopped for the night. I quite genuinely wish Udinese and all of their supporters luck for the Europa League and will root for them to be victorious.

The atmosphere inside the Stadio Fruili was rather strange. Arsenal only bought 400 supporters to fill 1,700 seats. I would estimate that around 75% of that contingent was derived from continental supporters’ clubs. It gives you a real appreciation of the fervour with which overseas Gooners support Arsenal. A reminder which is always well served on parochial London types like me. Nevertheless, a memorable trip with the desired result.

Of course, the avidity of the away support has moved into even sharper focus this afternoon. The club has announced that those of us that travelled to Old Trafford yesterday will be refunded the value of a future away game. This is a most appreciated gesture from the club. In a summer which has seen them take something of a kicking on the PR front, this sends out a positive signal. That said, I wouldn’t have badgered for a refund myself.

I was inside Old Trafford in 2002 when we sealed the Premiership title and I wouldn’t have taken kindly to a surcharge on that ticket price in retrospective view of events! I think when you pay for a football match, you only really part with your money with the guarantee that a match takes place. Everything else, you leave to chance. There again, the vocal support during the second half as United continued to pump round after round of ammunition into our soft, squidgy kneecaps was one of the more remarkable things I’ve experienced inside a football stadium. My lungs still ache. If the team were in dire straits, then we were the sultans of sing. But well played Arsenal. Now, a few more additions to the squad would be an even better signal to omit! 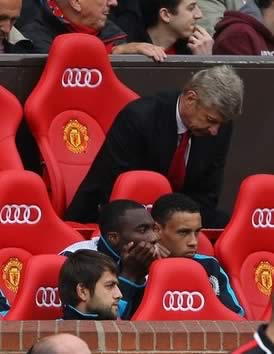 I won’t pore over the game in too much detail. Much for the same reason I won’t turn up at your front door unannounced and jam cocktail sticks in your eyes. Needless to say, the entire club has been in a right old funk for quite a while now. Absolutely everybody I travelled with predicted a resounding defeat – which is revealing in itself – but to ship 8 goals and lose by 6 was beyond the pale. I wouldn’t expect a League One side to get served up quite so emphatically at Old Trafford. Despite the pitiful state of our squad, the players on show yesterday are still better than that.

That’s not to say there was any lack of effort per se. Players such as Jenkinson and Coquelin were lambs led to a slaughter precipitated by a summer of neglect on the squad building front. But there just appears to be a morale issue there. Even by Arsenal’s capitulicious standards, the second half in particular was quite the prolapsed rectum of performances. The powers that be and the manager really have a job on their hands lifting the club. It’s not just the supporters that seem to be under duress, but there were senior players out there yesterday that looked like they were in need of a few bevies and a sing song to lift their spirits.

Check Rosicky’s reaction to the third goal here. Theoretically, Rosicky is one of the players benefiting from a summer of heedlessness, but even he looks weary and brow beaten. I won’t go into too much detail on the club’s transfer business this summer, because I will be writing a review column on that very subject here on Thursday. But the whole club at the moment just seems utterly demoralised. The manager has a gargantuan job turning that around, but one of the immediate actions he can take is to invest in some new blood and try to pick the atmosphere up again. It would be better late than never.

I’m just increasingly getting the sense that something’s not quite right behind the scenes. We can only but speculate, but one of the manager’s comments really jumped out at me in his post match autopsy. “If we find players who can strengthen our team then we will do it. But I am not the only one to work on the case; we have 20 people who are working on that.”

I’ve only read the comment in print, but the words look heavy on the page, as if they have been murmured out by a man trying to alleviate a burden he has been carrying alone. One thing is for sure, the next 48 hours are some of the most crucial of his reign. If there is a failure to rectify a catastrophe of a summer, then expect to see more young lads unfairly led out to slaughter this season.

To end on a slightly lighter note, a big congratulations to the Arsenal Ladies, whose continued excellence is not remarked upon nearly enough. They defeated Liverpool 3-1 yesterday to confirm the club as winners of the inaugural Women’s Super League. This is their 34th major trophy in 20 seasons. Quite remarkable.

As I mentioned, I shall be back on Thursday with a review of all of Arsenal’s summer dealings and the state of the squad for the season ahead. Let’s hope there’s a good few chapters to be told before I begin penning that. Chin up Gooners. LD.

Previous articleMan Utd 8-2 Arsenal: Shambles
Next articleArsenal react but do we have problems behind the scenes?