Hello everyone and welcome to July 1st.

Picture me standing, leaning forward, cupping my ear, waiting, listening. ‘Listening for what?’, you ask. Well, the tiny patter of new feet, of course! Today is the day when it all starts. July 1st. The day of the transfer. El dia del traslado. Le jour du trawnsfeeeerrrr.

Any minute now a veritable herd of new players will come over the horizon, hurtling across the fields like a pack of rampaging bassets, jowls a-flutter, ready to begin their new life at Arsenal. I can see it now. 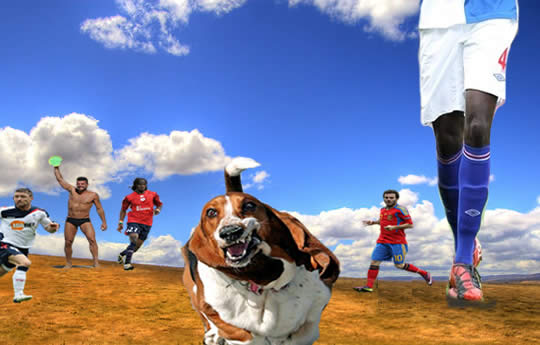 And the very first of those could be some Ivorian chap named Gervinho. Somehow he’s slipped through under the radar, haven’t heard a thing about him all summer long but he arrives saying the right things. Speaking to France Football he said:

“I’m going there to play, not to be on the bench. Arsenal love the game. And I love teams that love the game. In football you have to take risks if you want to win. I’m going to Arsenal to win”

“Sorry I’m late boss, I got off my bracket on crystal meth and I was having a ninesome! Lost track of time, you know yourself”.

The others are sure to follow close behind. Samba. Cahill. Ricky. Juan. Oxencart-Chamberpot. And there’ll be plenty of room at the inn too because some players are going out. Yesterday saw Gael Clichy linked very strongly with a £7m move to Man City. If the reports are to be believed the deal was done, wrapped up, completed, finalised and rubber stamped and he’ll play his football there next season.

Then came the news that City were interested in Samir Nasri. You all know the situation. He won’t sign a new deal. Ostensibly because he wants to see what Arsenal do in the tranfer market and wants to be sure we can win things blah blah blah but in reality it’s all about money. If you really wanted to I’m sure you could make something of the fact that the man who represents Clichy has also been drafted into Team Nasri. I’m sure it’s mere coincidence though.

How much truth there is in it, I don’t know, but we know Arsenal’s position is that if he were to refuse the £90,000 per week (that’s nearly £5m per year!) on offer from us we would try and move him on. Otherwise we run the risk of losing a player we paid £13.5m for, for nothing. I was told the end of June was the deadline and I don’t think it’s any coincidence that he’s now being linked to a number of clubs and an ‘unnamed’ Arsenal source told the Daily Star we wouldn’t be held to ransom by Nasri’s wage demands.

I shall hold my fire on this and see what plays out. On the one hand, getting £20m for a player in the final year of his contract is fantastic business, and I believe Nasri is far more replaceable than he might think. On the other, selling to City sends a strange kind of message and if Nasri goes there it will be quite disappointing from a fan’s point of view. His name was sung loudly and often last season and if he feels can’t manage on a piffling £90,000 per week it says a lot about him. We’ll see though.

Man United are also interested, and there’s talk of AC Milan and Inter looking at him too, so obviously Arsenal have made his availability well known. It would be preferable, if he were to go, that we sell to a club abroad but I think it’ll come down to whoever’s offering the most money and I think it’s fairly obvious who that will be.

Meanwhile, some players who were expected to be on their way out remain. Denilson’s agent says he’ll return to Arsenal for pre-season training as no buyer has yet emerged for him. I have no idea what Arsenal are looking for in terms of a fee but it may well be a case they have to lower it. Bit more. Bit more. Bit more. Bit more. Yeah, that’ll do. I still think he’ll be off, so I’m not too worried that nothing’s happened yet.

On Monday, I am starting pre-season with Arsenal. Before vacation I was speaking with coach Wenger and he told me he counted on my services and that there was no intention of selling me. I want to achieve something with Arsenal.

It would be fair to say his last season was ineffective but I can see the logic in keeping him. He’s experienced, he’s got some quite floppy hair and he’s one of Cesc’s best mates. You might laugh but for me it comes down to this: if we sell Nasri we simply cannot lose Cesc as well. If we keep Cesc it’s in our interest to a) improve the squad and b) ensure he’s as happy as possible. If that means Rosicky becomes his footballing butler (futler?) then that’s what we do. Jeeves Rosicky. Works for me.

Anyway, even if the idea of Denilson staying scares you, nothing even comes close to the headline in the Mirror: Arsenal plot raid on United for… erm… John O’Shea.

Apparently we’re also looking at Sylvia Distin. Sell Clichy, ignore Baines, buy Distin. Oh, I’m heading towards a dark place, my friends. Best reverse straight the fuck out of there and remember that reacting with dismay and fury to things that haven’t happened yet is not healthy. But when they do …

Anyway, a busy day lies ahead. Don’t forget the awesome summer sale at the store – all t-shirts just €12.99 – and I’ll be back tomorrow to announce the signings of Carlton Palmer Jr and Luis Boa Morte.