Time for all Guns to start blazing

I write just a few hours before setting off for White Hart Lane. It’s fair to say the butterflies are nesting in for a day of wine and dining at the expense of my guts. The parasite bastards. I haven’t missed a domestic game for some time now (well, since you asked, 9 and a half years ago), but it’s fair to say if I were forced to opt out of one, it would be Tottenham away. Along with the fraught nerves, egged on by the terrifying thought of losing to that bunch of fucknuts, comes the very real threat of getting your face danced on by a shaven headed gentleman called ‘Slasher McGirk’ as he chants “Yid Army” at your prone, bleeding cake hole.

If you’ve ever been to White Hart Lane as an Arsenal fan you’ll know what I mean. I recall going there for the return of Sol Campbell in 2001. I’ve been to some places that we Little Englanders regard with trepidation in following the Arsenal – Rome, Athens, far flung corners of Eastern Europe. I have never been to a game with a more poisonous undercurrent than that one. I remember my mate Jim and I both getting off the train at Seven Sisters and we both remarked instantly that there was a muggy, claustrophobic atmosphere. I’m no spiritualist – in fact, I make Richard Dawkins look like Father Ted – but it’s the only time I can ever remember attending a match and palpably feeling the hatred in the air.

Anyway, as if a North London derby required any extra motivation, the twin forces of nerves and anxiety will be joined at the ball by the striking brunette figure of hope. The hussy. Newcastle’s draw with Manchester United last night has allowed hope to sashay her way in, black stilettos, boob tube and all to give us all what will doubtless one day end up as a massive malignant tumour. A win this evening leaves us four points behind. As well as giving us a shot in the arm for the title race, it would also significantly lessen the possibility of United being presented with the opportunity to win the league on our turf. *shudders*

You feel tonight is such a pivotal game, not just for the present, but for the future. If, presented with the opportunity Newcastle have given them, coupled with the chance to avenge that blood curdling 3-2 collapse in November, they still can’t be motivated to provide an all guns blazing performance, then the loss of faith in this squad will be close to unanimous. You feel the club have been waiting for the right moment to formally announce the ticket price increase. With every collapse, with every insipid display, that job becomes a little harder for the club’s PR gurus at the moment.

I have to say though; I do rather worry about the ramifications of Liverpool’s late equaliser on Sunday. It’s clear now that this squad does undergo something of a self pity binge every time they get a setback. One can imagine that Eboue has been sitting in a darkened room for the last three days, carving Andre Marriner’s name into his arm with a compass. Only Arsenal could score the latest ever goal in a Premiership match only to have that record expunged minutes later in the same game. It wasn’t just Eboue’s piece of skulduggery that concerns, but Nasri and Song both had chances to hack the ball clear in the build up to Suarez’s free kick and both took heavy touches instead and invited pressure. 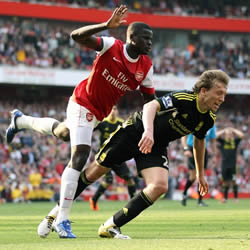 I spoke in this column a few weeks back of my scepticism for the cult of Eboue that has metamorphosised amongst our support and I do really rather hope that mistake on Sunday has halted it. It was kind of funny for a while, now it’s just fucking annoying. The fans have made their point and exorcised their guilty conscience for booing him in the Wigan match, but now it’s gone too far the other way and I don’t think it’s done the player any good either. This time last year, Eboue was sharing the right back with Sagna. Twelve months on, I wouldn’t trust Eboue to clean Sagna’s boots. I’m not saying we should slaughter the guy and Lord knows he has visibly consoled many an Arsenal player this season in trying circumstances, but let’s restore some normality again please.

Still, despite the bitter pill of the 102nd minute penalty, a draw was realistically about all we deserved on Sunday. Robin van Persie’s penalty was out first goal at home for close to 360 minutes. For all the talk about humungous, demi beast defenders and new goalkeepers, I really think Arsenal need to add a creative string to the bow in the summer. It’s clear that our inspiration and ideas department is pretty much manned in isolation by Cesc. When he doesn’t play, or on the rare occasions that he plays badly, as he did on Sunday, we notably struggle to pick our way past teams. Nasri, Arshavin and van Persie are capable of creating chances for themselves once in a while, but nobody else has the ability to split defences in twain in tight games. Liverpool defended well on Sunday, but that was one of the least decorated Pool sides most of us will have ever seen. Blackburn and Sunderland were able to stifle us with the same tactics. It seems at the moment you could get ten primates behind the ball (insert Gareth Bale joke here) and we’d struggle to score.

On a more reflective note, it was nice to see the Ken Friar Bridge and the touching Danny Fiszman memorial. It was also a classy touch from the club to pay due respects to the victims of the Hillsbrough disaster in the minute’s silence. That said, tempers did fray at the end between the two managers. Something and nothing really, emotions are running high and things get said. In the immediate aftermath of the match, I know all my invective was directed towards the referee, but long before I’d sunk the first post match pint I realised that he was in no way to blame. What does amuse me is the coverage of these incidents. Alan Pardew encroaches on Wenger, Wenger reacts, Wenger’s fault. Wenger encroaches Dalglish, Dalglish reacts, Wenger’s fault. It must be wonderful to have your moral compass fed to you by an institution as morally bankrupt as the British media.

Commiserations to the Arsenal Ladies for their Champions League semi final exit against Lyon this weekend. The standards these girls continue to set really are astonishing, they have been such a huge credit to Arsenal for as long as I can remember. Well done to the youngsters Stateside too, who have qualified for the semi finals of the Dallas Cup. One feels that the steely of Kroenke could be beadily staring down developments there. Think that’ll do from me for this week. If you’re off to the Lane tonight, stay safe and I hope to see you there. Up the Arse.