The Tim Stillman column: No half measures

A few days on, I still do not feel despondent about Tuesday night’s defeat. I have to say, when the final whistle sounded on Tuesday evening, I wasn’t even that disappointed. Much like Paris in 2006, I had mentally prepared myself for defeat as soon as the red card came out- furnishing my cranium with soft fluffy pillows upon which to wallow and cushion the blow of elimination. I thought the team fought bloody hard and ultimately, a very difficult task was made impossible by the sort of referee whose officiousness spoiled a fascinating and beautifully poised tie. 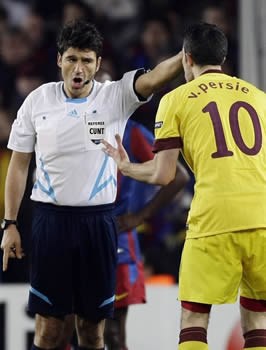 People can adumbrate all they like with Barca’s statistics and our lack of an effort on goal, but the facts of the case are that we were leading the tie 11 v 11. How often have Arsenal dominated possession against sides that defend deeply at chez Wenger and every time we fail to conquer them we’re treated to the extended disco version of “It counts for nowt unless you put the ball in the net more times than they do”?

Arsenal’s tactics were clear- whether they were enforced by Barca’s superiority is open to debate. But we defended well and kept a good shape in the first half, limiting Barca in terms of efforts. We had ontological evidence that we can finish a game stronger than Barca can from recent meet and greets with the cunty Catalans and I am convinced our tactic was to soak up the early storm and try to hit them on the counter in the last half an hour.

It might ultimately have come up short as a tactic; but we earned the right to find out for sure without a quite appalling shyster of an official intervening on a point of officiousness that mattered only to him. It wasn’t only the red card that didn’t quite add up; there were several calls that Busacca made that bordered on the bizarre. At one stage, he stopped the game for an injured Arsenal player and elected to restart the match by rolling the ball about 5 yards to his left, straight to the feet of Adriano – before Arsenal’s physio had even left the pitch! The referee, in effect, became part of the possession stats! Someone please point out to me the rule that suggests that is the correct way to restart a game?

Though I started the column with the suggestion that I was not overly disappointed and hinted at a fair bit of pride in how hard the team worked to adopt tactics to which they are unaccustomed, what has got my spleen spilling substantially is the media reaction, which I have been catching up on since my return from Barcelona on Wednesday evening. Why is it so difficult for the dribbling hacks to understand that yes, having your striker sent off when you’re winning a tie does in fact have a causal effect?

Anyway, it didn’t prevent us having a nice trip to a quite wonderful city. Our arrival on Monday was greeted by temperatures of around 22C. Tropical compared to the biting winter cold we left behind in London. After getting a belly full of anchovies and artichokes on Monday evening followed by a nice mooch around the city, our group went out and, quite accidentally, ended up getting roaring drunk in the Café Royale in Placa Real just off Las Ramblas. It wasn’t our fault nor our intention. See, in Spain, they don’t serve these pussified single measures. So, when my group and I innocently asked for a Jameson’s or a Gin and Tonic, (to clear and refresh the palate, obviously) our Scandinavian barmaid plied us with triple and quadruple measures all evening. Sneaky moo, don’t you think?

A pleasant stroll to the Port Olimpic and a hearty meal set us up nicely for the match in the evening. The security search we were subjected to upon entry to the ground was more stringent than anything we experienced on our flight into the city, with metal detectors deployed prior to the ascent up high into the fourth tier of the Nou Camp. The amount of thoroughly inebriated supporters you see in the ground on European away trips beggars belief; I lost count of the amount of people that were drunkenly stumbling over steps, their eyes dreamy and dilated like saucers.

I like a drink up as much as the next British gentleman; but I struggle to empathise with people that get the opportunity to see the team in a city as salubrious Barcelona, but then choose to spend the whole daytime holed up in an Irish pub. Sample the nightlife after hours for sure, (we sure as hell did!) but it strikes me as a missed opportunity to get out and see a wonderful city in daylight hours. Then again; I am quite willing to accept that I am a pretentious arse.

There was no small amount of humour too post match. It is standard in European away fixtures to be kept inside the ground by the police for a long period after the match. One Gooner decided he’d had quite enough of waiting and slipped the netting that enveloped the away section, dropped down into the vacated home end and trotted off untroubled. Several followed suit; with each clamour for freedom being greeted with a rendition of “The Great Escape” from their watching Gooner comrades.

I hope a lingering sense of injustice around the defeat incubates the team from any negative psychological repercussions. Our objectives are clear now and by having further midweek European engagements snaffooed from our calendar, we truly are on the home straight. Assuming United qualify against Marseilles, we take an advantage in the title race and into this weekend’s cup game; provided we don’t navel gaze and go all Sylvia Plath about things.

I also hope the performance of Manuel Almunia on the night stems the tide of invective Gooners are prone to throw his way. I won’t pretend I have ever thought him quite up to scratch as an Arsenal number 1; but some of the criticism bestowed upon him has been hysterical and bordering on quite unpleasant at times. My cohort over at Vital Arsenal, Amos, framed it better than I can when he said that some players are made of Teflon others of Velcro. Almunia seems to attract fierce criticism for so much as letting a penalty in.

The Boss took a quick break from calling UEFA a pack of useless cunts in his press conference this week to suggest that he will play his strongest available side for the cup tie at the Glazerdome. I hope he is good to his word, with the Champions League off the menu for another year; it would be foolish not to try and line our stomachs with the rich, creamy goodness of the cup.

I quite fancy us to knock United out after a replay on the condition that the likes of RvP and Jacky Wizzle are in the starting line up. I think the manager recognises that tumbling out of three cups in 13 days would not be the best seasoning for the bread and butter of the league. So, until I speak to you all again next week, keep it Arse. LD.