Before kick off it was hard not to look at United’s line-up and think we had a real chance. Injuries meant they started with seven defenders, and with all proper respect, it was hardly as fearsome a United line up as we’ve faced down the years.

Come the end of the game though you realise that what I alluded to yesterday about their character and team ethic is absolutely true. They work better as a team than we do. Can anyone imagine us playing them with a makeshift back four, Gibbs and Eboue on either wing, a dodgy centre-half and a fringe player in midfield, and winning the game? I can’t. Yet it’s no surprise to me that United did yesterday. 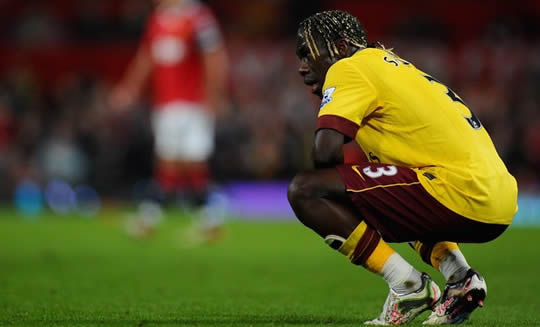 Anyone that writes them off on the back of a couple of defeats is a fool and they made plenty of pundits and commentators look foolish yesterday. When it comes right down to it they know how to win games and, at the moment, we seem to know how to lose them. Does anyone want to break out the stats, the possession, the chances? Not me. As I said after the Barcelona game they don’t tell the full story.

Edwin van der Sar was man of the match yesterday, he made a number of very good saves, and in general I thought we played quite well. We kept the ball nicely, moved it around, kept it some more, moved it around some more, kept it a bit more, and from time to time fashioned some chances. A least one of them, I’m thinking of Chamakh’s second half header in particular, we probably should have scored, but the veteran keeper had an excellent day.

And once again this team showed its Achilles heel – conceding to the first real attempt on goal. Some dodgy defending allowed Fabio to sweep home into the empty net after Almunia had made a good save from Hernandez’s header. I don’t know whether it was Koscielny or Gibbs at fault but Fabio was the left back’s man. Arsene said afterwards:

Manchester United had very few chances, they scored with almost their first attempt on goal.

Unfortunately that’s an all too familiar refrain in recent seasons. How many times have we dominated a game in terms of possession and found ourselves behind to the opposition’s first chance? It’s not bad luck, it’s a fundamental weakness. And while I’m happy to point out the ruthless efficiency of a team like United you can’t say that’s true of all the teams we face.

Also, when you’re 1-0 down and you need a bright start to the second half, it’s generally not a good idea to concede straight away – especially to a team with seven defenders in it, and a team that’s pretty good at that part of the game. That is exactly what we did. Fabio got past Gibbs way too easily on the edge of the box, Djourou blocked the shot/cross very well but it looped up and Rooney’s glancing header crept in at the far post. Again you’ve got to question the defending.

The manager tried to change things, firstly Chamakh came on for Denilson, then Rosicky and Ramsey replaced Diaby and Arshavin. There were chances – Chamakh’s header, a great save from a Koscielny effort, a van Persie curler that went just over the top corner, a Rosicky thumper, a Rosicky fresh air kick from 6 yards out, but unless you take those chances they become meaningless stats. The only one that really counts is the scoreboard and that remained a big, fat nil.

Then, as perfect example of how what little luck we get at the moment is bad luck, Almunia pulled off an incredible save to keep it at 2-0, but in the scramble in the 6 yard area, Sagna and Djourou collided resulting in a dislocated collarbone for the big Swiss and the end of his season. It was the vomit based icing on a cake made of orphan shit. It is a massive blow to our hopes for the rest of the season. He’s been outstanding and we now go into the final league games of the season with just two fit centre-halves, and two who have yet to convince anyone that their parternship works.

Sorry if this all sounds a little down but it’s hard to go out of three cup competitions inside a fortnight and not be a little upset and a little worried about the team and how it can possibly react. Arsene spoke afterwards, saying:

Things do not go our way at the moment. I am very disappointed. We lost three challenges in a strange way.

Now, while I think we’re definitely not getting the rub of the green in terms of decisions and injuries, I have to take him up on this. Losing to Birmingham was losing in a strange way. The calamitous cock-up between Wojscez©® and Koscielny was freakish, no question. Losing to Barcelona, well the red card had an impact, I’ll stand by that, but we can hardly call yesterday strange.

Arsenal dominate a game in terms of chances and possession but don’t win. That’s not strange. That, Arsene, seems overwhelmingly normal. And something has got to change. What seems like Groundhog Day could very well become Groundhog season unless we sort ourselves out and find some bottle and character. The odds are stacked against us. One fit keeper, just two centre-halves, some players whose futures at the club are clearly in the balance due to the consistent lack of performance, and a team which has promised so much, yet again, seemingly unable to take that next step.

On paper we had a better team than United yesterday – but on the pitch, despite their injuries, they were too good for us. They are, and remain, a better ‘team’ than us. If a dogged determination and an ability to win games they probably shouldn’t characterises Ferguson’s regime, then an ability to lose games we should probably win is what characterises Arsene’s. Certainly in the second half of his time at Arsenal. It’s hard to look beyond the idea that the flaws we have come from him.

I don’t, for one second, doubt his motivation, how hard he works, his committment to the club, his drive or anything else, but when you find yourselves out of three competitions inside two weeks you have to ask questions. Where is this mental strength he talks so much about? When are we going to respond? How are we now going to play the last ten games of this season, knowing each one is going to be like a cup final, when we’ve shown we can’t win cup finals?

It’s a big job now for the manager to lift this group and to get more out of them. Some of them, sadly, don’t appear up to it. I would happily be proven wrong about that but it’s hard to be confident. The Quadruple is now the Onetuple and a couple of bad results will make in a Nonetuple. Ultimately that will all come back to the strength of the squad. Of course you can’t have 11 Cescs or Nasris but what United proved yesterday is that you can have back-up players who are capable of doing the job required. That’s the difference. Beyond our first 11 we simply don’t have that.

‘The project’ is admirable but there must come a time when Arsene realises that he has to cut his losses with some of these players, admit he was wrong – and there’s no shame in that – and replace them. The club has money to do that, failure to spend and to persist with those weaker links would be negligent. Glorious failure is nothing to be proud of but that’s the road we’re headed down this morning and it hurts.

Anyway, so as not to end on a totally negative note it was great to see Aaron Ramsey make his return yesterday. A year out of the Arsenal colours and hopefully he’ll be given the chance between now and the end of the season to make his mark. I’ve seen enough of some midfielders already. There’s no transfer window but, without wanting to drag up that old cliché, he is like a new signing and should be used to bring some verve and energy into this team.

As well as that, if there’s any small crumb of comfort to be gained from United’s progress, perhaps it’s that their schedule, should they qualify in Europe too, will certainly be busier than ours. Maybe they’ll just use it to keep their momentum going but maybe it’ll mean some tired legs too. Our game against them at home becomes even more important now.

And that’s about that. No talk of picking ourselves up this morning, no dusting down, getting on with it, concentrating on the three two one competition we have left. No more words. It’s down to the manager now to sort this out before it all goes completely pear shaped.

After fifteen years at the club I reckon this is his biggest challenge yet.