Ahh, you know what’s a pain? Writing a whole intro to a blog post then accidentally selecting all and pressing the number 2 to see it all disappear.

Yeah, it shouldn’t be a problem because of the awesome power of Apple+Z to undo but undo didn’t work and these words, this wonderful prose … lost … forever. I could try and recreate them but it would be like da Vinci finishing the Mona Lisa, tipping a pot of Crown Emulsion over it and trying to reproduce it. He’d have to do a different Mona. Mona Jessica. Mona Irene. Lisa would be gone.

So this is the Mona Irene of blog intros. Not a classic, it won’t hang for centuries in the Louvre, unlike Oliver Holt’s masterpiece “The Coronation of Barcelona and Virgin” (something to do with a Richard Branson sponsorship deal, I think), but it’s all you’ve got.

Anyway, onto things Arsenal and despite the immense tragedy of having to play another game of football things are going reasonably well at the moment, you’d have to say. Cup final coming up on Sunday, just beaten Barcelona, scrapping for the league and still in the FA Cup. It’s not too shabby at all. So to bring us all back down to earth how about stories about Samir Nasri threatening to quit?

Well, you can find them all over this morning. Nasri ‘quit threat’. Nasri ‘I could go’. Nasri ‘What’s for dinner? I’m starving’. Anyway, here’s my thinking on this: meh. Not meh at the possibility of Nasri leaving but meh at the story and meh at the timing of the story. We know his contract is up next summer and from what I hear we’re fairly confident that a new deal will be agreed. Arsene Wenger has said consistently the matter would be looked at in the summer, Nasri saying the same doesn’t make it a huge story all of a sudden.

Personally, I don’t understand the waiting part. Never have. Players and clubs claim they’re too busy, too focused on football to sign a deal. It’s not as if the players have to go in there after training, bargaining for an extra £50 every time they score and an expense account with a local taxi firm. They have agents and advisors and managers who take care of all that for them. The only thing they have to do is walk in, pick up a pen, make some kind of vague X where it says they should, and then walk off considerably richer than they were before.

In fact, all things being equal, the player could be lounging around in his pyjamas, playing PS3, eating a truffle soufflée and buying pieces of Tracy Emin’s ‘art’ just to destroy them, and Agenty could nip around and get him to sign. Job done. However, as much as I like to imagine that’s the way the life of a top class footballer works I suspect the truth might be somewhat different so I’m not going to worry about it at all. I can’t control it and I guess we have to trust the manager when he says it’ll be done and hope that Nasri sees his future with us.

You know, if I was super rich I’d buy things I didn’t like just to destroy them. Like Sp*rs. I’d sack Harry and make John Sitton manager. And insist he play 8 up front. And fly keeper. And pay him so much money he couldn’t possibly argue with me. And when the crowd held up their ‘Sack the Chairman’ banners at the games I’d flick the switch and electrocute them all. There’s nothing whatsoever in FIFA rules saying you can’t electrocute the fans of the club you own. Check it out if you don’t believe me.

Also this morning stories about how Barcelona are ‘furious’ with us for signing another of their youth team kids. Youngster Jon Miquel Toral Harper (English mother, you see) will join us as reported by Young Guns via Catalan Radio. Apparently they’re going mental and stuff but such is life. 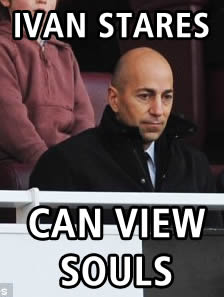 I suspect that their fury is rather being played up simply because we’re playing them again in a few weeks. Sure, they might be upset at losing a promising player, but stories of a face-off between Gazidis and Sandra Rosell could be to do with any old thing. I suspect Gazidis just stood there and gave him the stare. The stare of unimaginable Gazidisness – and whatever Rosell had a beef about was no longer an issue.

Anyway, the best thing about this story is the complete and utter bollocks The Sun have made of ‘their’ world ‘exclusive’. 101 Great Goals has the details. Couldn’t happen to a nicer paper etc etc.

The Mirror says Wojscez©® is walking a ‘Twitter Tightrope’ after his weekend comments about Cashley’s penalty miss. Pfff. He probably shouldn’t make a habit of doing it, in fairness, but it’s hardly worthy of any FA attention. And thankfully the Mirror didn’t use the phrase ‘Twightrope’, which would have made me want to drink a cup of angry bees.

Also, reports of a Vermaelen setback are wide of the mark, I’m told. He’s running normally, heading back to full training and if he’s not going to feature in a reserve game it’s probably because he’s not quite ready. We’re going to be ultra-cautious with him, I suspect, and that’s what’ll delay the comeback slightly.

And finally for today, just a pointer in the direction of a new feature on Arseblog – The Tim Stillman column. Tim will be here on a weekly basis and this week he looks at the Orient game, fandom, Stoke and the Carling Cup final. Enjoy.

Right, that’s about that. Tomorrow we can look ahead to the game against Stoke, team news, preview, finding new ways to describe Pubis and Lennie, all to come. Until then, have a good day.