busy day today, and it’s Friday, and it’s the end of the so-called working week and it’s the end of so-called January (mostly) which means that the month on the dry is over. I’m a little scared to be honest. What if beer has found somebody else? Rum might have the hump with me? Oh bourbon, I didn’t mean to hurt you, cups of tea are no match for your special warmth. We shall see.

The early team news for Sunday’s FA Cup game against Huddersfield is that three long-forgotten Gunners are in line for a return. It’s a scientific fact that the last time anyone though about Abou Diaby was December 19th and that was a woman from Berkshire whose brain is suffering the effects of too much Tesco Value Vodka and mixed him up with Adam Ant.

Tomas Rosicky has been in quarantine for the last couple of weeks with a highly infectious lurgy. Rumours he had left the club entirely to set up a mail order business, selling chunks of his own hair that he ripped out in frustration at not having scored since WWII, are completely false. And Manuel Almunia is back in contention for a start for no funny reason at all other than Fabianski’s shoulder injury is causing him some real problems and as the only other senior keeper at the club he’s being kept around for insurance purposes.

Not that he’s selling life cover to the other players, but going into Champions League games, and crucial games in the league, not to mention a certain cup final, without any experienced back up to Wojscez©® would have been quite mental indeed. I’m told Almunia was all set to the leave the club in January, it had all been agreed with some club on the Bosphorus, but now he won’t be allowed unless some last minute deal is done to bring in someone else. However, I see that as very unlikely.

It’s also suggested that Manuel is not particularly happy at having to stay, nor understudy Wojscez©®, but that is the nature of professional football. One minute you’re up, the next you’re the opposite of up, whatever that is. He might do well to think of Jens Lehmann’s last season at the club. I’m sure he didn’t enjoy playing second fiddle to Almunia but he did his job, didn’t complain that much, and just accepted it as part of the professional game. I’m sure Manuel would prefer to be playing somewhere but he’s done very well out of Arsenal over the last few years, and if the club needs him as cover until the summer then that’s that.

The Guardian says we’re in ‘advanced talks’ with Southampton over the transfer of Oxtail-Chamberpot, with a view to loaning him back to the Saints for the rest of the season. The Guardian also said on Twitter yesterday they had a massive exclusive to break and in the end it turned out to be a piece of Goal.com-esque transfer bollocks. I still love the Guardian but yesterday’s Twitter thing was like them offering me a piece of chewing gum only to find it was one of those hilarious joke chewing gums which snaps a thing down on your finger causing you mild discomfort for a few seconds.

WHERE IS THE TRUST GONE NOW? WHERE?!

Also in The Guardian (I’m reaching out here guys, don’t cause me mild discomfort again, please) Fabio Capello talks about Jack Wilshere and Theo Walcott. Regarding the former he’s going to play him for England in front of the defence but then says he’s slower than Makelele. Unless the former Chelsea man is quite the brain then that’s a serious insult. What? Oh yeah, pace. And speaking of pace he also says he was wrong not to take Theo Walcott to the World Cup.

There’s a general rule of thumb Capello should have applied. When the choice is between Aaron Lennon and anything else then anything else is the right option. Aaron Lennon or Cornflakes. Cornflakes. Aaron Lennon or a shiny new Saab. The Saab. Aaron Lennon or a mutilated pony with serious personality issues and a tendency to go for a plop on the pitch at any time. The pony, all day long. I suppose it’s good for England that he knows he got that one wrong. Personally, I’m glad Theo didn’t go to the World Cup. Let’s face it, pretty much everyone who was at that tournament, bar the Spanish, wants to forget it like it was a night out when you did something stupid and ended up on YouTube.

Meanwhile Aaron Ramsey says he’s just using Cardiff to get back into the Arsenal team as quickly as possible. I hope he gets a good few games under his belt there because I’d love to see him back in the squad adding more competition and depth to the midfield. He might well have played this weekend had he stayed around but that’s just one game. From what I can make out Cardiff have six or seven games before his loan spell is finished so if gets a few 90s under his belt and comes back raring to go all the better for us.

And that’s about that so it’s time for this week’s Arsecast. Joining me to discuss all the bits and bobs is John Cross from Mirror Football. As well as that we hear from Talkshite Radio, Internet Joe, Arshavin and more.

You can subscribe to the Arsecast on iTunes by clicking here. Or if you want to subscribe directly to the feed URL you can do so too. To download this week’s Arsecast directly – click here (26mb MP3) or you can listen directly below without leaving this very page.

And that’s not even everything today. Because it’s a Friday how about a competition? 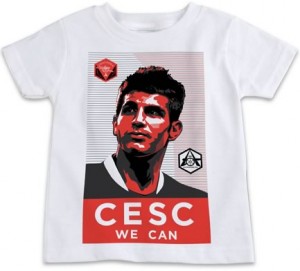 Ok then, my good old friend at Gunnerblog has given me a couple of these fine ‘Cesc we can’ t-shirts to give away. Click on the image for a better look.

To enter all you have to do is answer the following question:

Is it legal to punch a bishop at a fancy dress party? Choose from a) Yes b) It sure is or c) Absolutely, and send your answer to ‘[email protected]‘. You have until tonight and I shall give you the winners on tomorrow’s blog.

If you can’t wait that long and fancy a shirt yerself knock on Gunnerblog’s door. He’s open for business and will greet you with a winning smile and a twirl of his flaxen locks.

Right, have yourselves a jolly good Friday. Back tomorrow.