Wenger is off-Song about Alex

Morning all, the start of another week and the preparations have to begin for two extremely important games. Firstly there’s the Champions League game against Partizan on Wednesday, then a trip to Manchester on Monday.

The focus will be on Europe this week and the permutations are relatively simple. A win will definitely qualify us, a draw or even a defeat could too if Shaktar beat Braga but the last thing we should do is depend on other results. Following up on Saturday’s win against Fulham is important, to reinstate some measure of confidence at home and keep a bit of momentum going before the United game.

And speaking of Saturday’s game there’s been a lot of talk about Alex Song and his tendency to get so far forward. As I suspected he’s just doing what he’s told. Arsene says:

Song is high up the pitch because we want him there. I am comfortable with that, even though it sometimes leaves us open in the middle of the park. If we lose the ball in the build-up, we are in trouble. But we want to play in the other half of the pitch and, therefore, we have to push our opponents back. My philosophy is not to be in trouble, but to fool the opponent into trouble.

I have to say I’m really struggling to make proper sense of this. I understand wanting to play in the opponent’s half but you have to find the right balance and we’re not doing that at the moment. Look at Saturday, if Song sits we have more natural attacking players in Wilshere, Rosicky, Nasri, Chamakh and Arshavin ahead of him as well as two full backs that love to get forward. That’s more than enough to play in the opponents half. 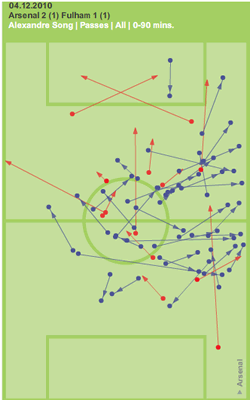 The admission that we’re ok with putting ourselves in trouble is quite startling really. It means the manager has no real focus on defensive solidity and without that there’s no way you can win a league title, in my opinion. You also have to look at how effective Song is in the opposition half. Yes, he’s had some good moments but for me lacks the awareness and vision required to do what he’s been asked to do.

I think this season he’s struggled more than last with his passing, probably because he’s being asked to play in a way he’s not particularly comfortable with. On Saturday his passing was very poor and 8 of the 13 unsuccessful passes came in the opposition half.

It tallies with previous games too. Against Everton 6 of his 10 unsuccessful passes came in their half of the pitch, against Villa it was 9 of 18, Sp*rs 6 of 8, Everton 6 out of 10, Wolves 5 out of 7 and at home against Newcastle 7 out of 10. There’s a bit of a pattern here. Not only is Song’s forward position causing us problems when we lose the ball but Song is guilty of giving it away up there quite a lot, thus compounding the issue.

Of course he’s not the only one guilty of poor passing in the final third but it’s not his natural game and to me it’s clear he’s struggling with it. As a consequence the team struggles because we don’t have the defensive shield that our back four really needs. Yes, we’re an attacking team but we’re also vulnerable, just four clean sheets in 16 league games tells you that, and until we find the right balance that’s always going to be case. And there’s just no way we can go through the rest of this campaign hoping to outscore the opponents every time.

The thing is, if we were a better defensive unit I think we’d be a better attacking side too. It gives those in more forward positions greater freedom knowing there’s some protection behind them and you could see how the Fulham goal affected the team on Saturday. It was really a case of ‘Oh no, here we go again’ as heads dropped. I know it might seem churlish to criticise a team that’s top of the league but this devil-may-care attitude to the defensive side of our game is rather worrying.

It is possible to be a fantastic attacking side but also be a side that defends well. It’s not as if we need to make drastic changes here. Asking Song to do what he does best would benefit both the team and the player. If we’re chasing a game and we need to throw men forward that’s one thing but it’s hard to find any sense with Alex Song bombing forward in the final stages of a game like he did against Villa. We didn’t need a goal, we just needed not to concede. Some common sense is required and it needs to come from the manager, we can’t blame a player for doing what he’s told.

Meanwhile, Bacary Sagna is looking ahead to the ‘big’ games this month against United and Chelsea, saying:

If we want to be successful, we have to win these big games. In our first of the season, against Chelsea, we dropped points. We have dropped so many points at home that we need to win these games.

The fact is that we’ve put ourselves into a good position whereby we don’t necessarily have to win. We’re not chasing them from miles back, we’re ahead of them (although United do have a game in hand). Winning would be great, it’d be about time too, but those two games in particular are ones in which draws would be decent results – provided we can maintain things throughout the month.

Despite some reports yesterday that Thomas Vermaelen might be in contention for the Chelsea game, I’m told that January is the earliest we’ll see him. He’s had a protective boot on and is now beginning to undergo some rehab for the injury. I’m positive that there won’t be any risks taken so fingers crossed all goes well and we see him back in red and white sooner rather than later.

And finally for today Arseblog has been nominated for Best Club Site in the Soccerlens awards – please go here to cast your vote, and if you fancied giving Three and In a vote for Best New Website that would be much appreciated too.

Right then, that’s that for today. Back tomorrow.