A horrible day yesterday. Truly horrible. Dropped points and the sight of one of our players suffering a truly awful injury. Some days though the result isn’t the most important thing and today we should be hoping that Eduardo makes a recovery from what appeared to be the worst injury suffered by an Arsenal player since Abou Diaby’s ankle was shattered by Sunderland’s Dan Smith.

The frustration of the dropped points came from the fact that Gael Clichy got the ball late on – although he did switch off before the challenge. When you consider that Mike Dean ignored clear penalty on Adebayor when his shirt was pulled in the box just before that incident is really very irritating. We’d come back from a goal down, Theo Walcott got two goals but sadly his contribution, and his first league goals, will be overshadowed by everything else. Well done, Theo though. This is a boy we’re really going to need between now and the end of the season so hopefully this will have done his confidence the world of good.

James McFadden scored the penalty and the award of the spot kick sparked some remarkable behaviour from William Gallas. He made his way to the other end of the pitch then booted some advertising hoardings when the goal was scored. I can understand his frustration but the captain of this football team should have been there on the off chance that his presence might have been enough to prevent a goal. He may well have been traumatised by what happened to Eduardo but so were the other players. The captain should take centre-stage to set the right example, not because he’s having a fucking hissy-fit all on his own. Disappointing, I have to say.

Now, I’m not just having a go at Gallas. I think he’s done a good job as a player and a captain this season, and it’s obvious he cares (perhaps a little too much about himself) but we’ve said his captaincy should be judged when things start going wrong and he wasn’t up to scratch yesterday. Can you imagine Tony Adams doing that yesterday, whatever the circumstances? No, me neither. He needs to shape up.

The superstitious might point to Adebayor’s haircut and the big man didn’t have his best day. I don’t think he ignored Bendtner in the second half, I genuinely think he didn’t see him and given the scoring run he’s been on he obviously felt confident of scoring. At 3-1 that would have been game over but these things happen sadly.

Obviously though the main issue is what happened to Eduardo. Here’s the challenge that David Platt on Sky said wasn’t even worthy of a yellow card. 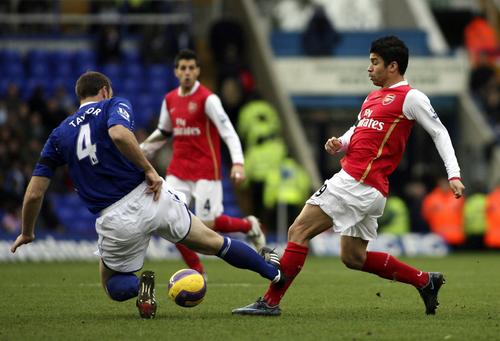 That is the kind of challenge we should not accept. Not as fans. As administrators. As managers, players, pundits or anything else. It was absolutely deplorable and it’s been waiting to happen for years now.

Do I think Martin Taylor set out to break Eduardo’s leg? No. I think it’d be a very sick individual that did that. Do I think Martin Taylor decided to get ‘stuck in’ to Eduardo, ‘just to show him he’s around’? Yes, I do. I think he wanted to get in a heavy challenge early in the game and perhaps put the Crozilian off his game. 99.9% of the time these ‘tackles’ don’t end up with serious injury but this time Taylor is that .01%.

Eduardo’s foot was planted on the floor, Taylor came in a foot over the ball – not 2 inches, not 6 inches, at least a foot – and he has a put at risk the career of a fellow professional. It was a horrific challenge. Sorry, but anyone who has played football knows from simply looking at that picture that the tackle was designed to hurt. You don’t leave the ground like that, you don’t lead with your studs like that if you’re not trying to hurt the opponent. To say it was ‘mistimed’ is simply trying to make excuses. I’m sure Taylor feels bad but so he should. He should feel like a fucking piece of shit because what he did was as cowardly and appalling a tackle as I’ve seen in a long time. Here’s the slow-mo video of it, if you stomach it. But watch it and then try and tell me that Taylor didn’t set out to ‘do’ Eduardo. It was nothing to do with Eduardo being too quick, it was deliberate and downright dangerous.

Immediately afterwards Arsene Wenger said Taylor should never play football again. Later he, quite rightly, retracted that saying he had been speaking in the heat of the moment but I can understand where he’s coming from. It’s rare, really, really rare, for a player to suffer serious injury at the hands of another pro. We’ve seen players snap cruciates and smack heads and things but you know the last two really bad tackles I can remember that have put players out for a long time have both been on Arsenal players. Dan Smith of Sunderland badly injured Abou Diaby and now Martin Taylor has ended Eduardo’s season and quite possibly his career.

And here’s the worst thing for me – the maximum ban Martin Taylor can serve is three games. It’s nonsense. I was critical of Eboue’s tackle last week but the fact that Eboue and Taylor get the same ban is ludicrous. You might have seen Jeremie Aliadiere red carded yesterday for a small slap. How is it fair that Aliadiere will get three games for not hurting an opponent at all yet Taylor, who may have broken Eduardo’s leg beyond repair, gets the same ban?

I’ve said this before but there must be a sliding scale for red cards given for violent conduct. A review panel should be able to look at what Martin Taylor did and decide that his ban should last 5 games or 10 games or 20 games. Whether the ref saw it or dealt with it at the time is irrelevant. The ref has seconds to make a decision, replays let us see if there was intent or if it was accidental. They let us see the real damage.

You cannot deal with all ‘violent conduct’ incidents the same way. Some are more violent than other and deserve bigger punishment. There has to be a way to punish Martin Taylor more than you punish Jeremie Aliadiere. It’s just the most stupid thing I can think of that this is not possible. How can you give a three game ban to somebody for a little slap and the same to somebody who breaks somebody’s leg? It’s like giving shoplifters the same jail time as rapists.

It was always going to take a horrific injury to somebody before this issue came to the fore. As long as I’ve been writing Arseblog I’ve been going on about it, and that’s coming up on 6 years now. Sadly it’s our player who has suffered but if there’s any positive to be taken from it it’ll be that some kind of change in the laws of the game will be precipitated. That those who perpetrate real acts of violence on fellow players are punished accordingly and not merely give a three game slap on the wrist then sent on their way.

To Eduardo and his family, all the very best. I’m sure he knows that every Arsenal fan, and I’m sure most football fans across England, will be wishing him a successful and speedy recovery. It doesn’t hurt to say it out loud though.

So, what now? The gap at the top is three points as United once again destroyed the pathetic excuse for a football team that is Newcastle. Well, often incidents like this can consolidate a squad. The ‘Do it for Eduardo’ thing might sound like a cliche but it’s a reality. This is a squad that’s young, that has many friendships, that has a good spirit anyway. They cannot allow what’s happened to Eduardo to freak them out, they have to use it, cynical as it might sound, to push on between now and the end of the season.

It’s happened to us before, albeit not in such traumatic circumstances. How sweet would it be in May to have the podium on the pitch at the Grove and for Eduardo to receive his medal to this kind of reception from his teammates?

As fans too we have to recognise we have a role to play too. These players are Arsenal players, they’re our lads, they’re fighting for the championship. Fuck the critics, fuck the begrudgers, fuck the other fans, fuck the Sky TV pundits, fuck the BBC, fuck that fucking little cunt Garth Crooks, fuck Martin Taylor, fuck Alex McLeish and fuck whoever’s left.

Let’s stand behind our team. We are the Arsenal. Let’s go win the league.