Iâ€™ve never played in Spain and never will. This is my last contract. – Thierry Henry, May 2006

I still have to pass a medical on Monday. But yes, I have chosen Barcelona. I am going to sign there for the next four seasons â€¦ for the football they play, their history, their stadium. For Frank Rijkaard, who I grew up watching. – Thierry Henry, June 2007

Proof, if it were ever needed that what a footballer says one day is completely redundant the next. Like most of you I’m sitting here this morning, hungover and drinking a glass of apple juice that looks like cloudy urine, and trying to get my head around the fact that Thierry Henry has left/is leaving Arsenal. 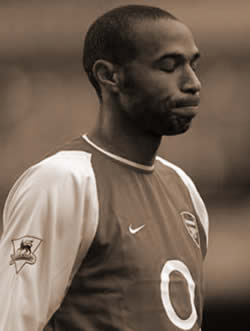 Although it’s not a surprise this time around it’s still a big wrench. This is bigger than Vieira leaving, in my opinion. Henry, at his peak, was probably the best player in the world. Some of the goals he scored were just incredible and it was an absolute pleasure watching him. If I try and choose one game I think the game in which he scored 4 against Leeds sticks out for me. He was just brilliant that night and we’re going to miss that Thierry Henry.

I think Â£16m is probably a little bit on the cheap side but it’s not one English club selling an English player to another. Henry explains his reasons for leaving, after last year’s declarations of loyalty, saying:

David Dein is no longer there and there is no denying the fact this has de-stabilised the team and the manager. Arsene Wenger has said that at this moment he will not commit to the club past the expiration of his current deal, which finishes at the end of this coming season. I respect his decision and honesty but I will be 31 at the end of next season and I cannot take the chance to be there without Arsene Wenger and David Dein.

While I can understand his worries about Arsene Wenger the idea that Thierry Henry won’t play at Arsenal without David Dein is very strange. I think that his close relationship with the Dein family has destabilised him at Arsenal and allowed him to agitate for a move away, with all the trappings that entails, while using the boardroom uncertainty to justify it. I think it’s very sad that he’s allowed a situation which, beyond the realms of friendship, shouldn’t really have concerned him. Ultimately he decided he no longer wanted to be at Arsenal and there’s really very little you can do with a player like that – especially when there are lots of potential buyers.

We probably have to realise that his relationship with Arsene Wenger is not what is once was. There was the incident in December when Thierry’s month long injury came about after a row between them. To be fair to him he did the right thing and publicly supported the team although some people suggested his presence on the sidelines and his dancing was more to do with keeping himself in the spotlight. Then there was the injury he picked up against PSV which saw him out for the rest of the season.

My opinion on this is that Arsene wanted to give him a chance to get fully fit and to work hard to regain the natural fitness he’d always enjoyed previously. It was meant to reignite his hunger for the game. I’m sure he could have played again last season and obviously not enough happened to convince Arsene that was happening. I think we also need to look at Arsene’s track record when it comes to letting big players go and he’s rarely been wrong in terms of when to allow them to leave.

He probably feels now is the right time for Thierry to leave both from the club’s point of view and from the player’s point of view. He might feel that Henry’s influence is not what it once was and that he might struggle to get back to the very top of his game where Arsenal fans have always enjoyed him. And speaking of Arsenal fans Henry said:

I will miss the Arsenal fans dearly, they have supported me through thick and thin. They will always be in my heart, as will all the fans who make the game here so special. I will always have a special bond with Arsenal Football Club.

And he will. Even though some people might be annoyed at him for leaving and at the reasons why he’s leaving the man is our greatest ever goalscorer and has provided us with some incredible football in his eight seasons at the club. Players come and go all the time and Thierry Henry is no different. We have to thank him for good times, not sit around and mope and get on with things because there’s a new season to prepare for.

What the club do now is vital though. You simply cannot let a player of the quality of Thierry Henry leave and not do your utmost to replace him with somebody of similar calibre. Now, we can’t get another Henry, he was quite unique, but a signing that signals the club are serious about replacing him is a must. A signing that is little more than potential will not be good enough and will not do Arsene or the board any favours. As much of the Â£16m as is necessary should go into finding a replacement and if some of whatever we’ll get for Reyes needs to be used then that’s what should happen as well.

Or, that money needs to be used to bring in two or three players of top quality who will make the absence of Thierry less of an issue. As it stands though we do need a striker and not long ago on the Arsecast chatting to Goodplaya, GilbertSilver from Gunnerblog and the Man from East Lower we were all of the opinion that we needed a striker anyway. That need is now even more needy. Nicolas Anelka’s name has been mentioned and how ironic that would be. Arsenal sell Anelka which funds the Henry transfer and Arsenal then sell Henry which funds the Anelka transfer. It’s the circle of life!

In terms of style of play he’s an obvious candidate although he does come with a lot of baggage and will make a section of fans unhappy. If you look at it with non-Arsenal eyes though he’s a lightning fast striker with a good eye for goal and probably a lot more grown up now than he was. If we can accept him as just a footballer he might be an option. Around England it’s hard to see who else could be in the frame although Newcastle fans will probably be feeling a bit twitchy about Martins and Michael Owen. Trezeguet and Torres are other names that will undoubtedly crop up but at this point we just don’t know. All we know is that he’s got to be replaced.

Some people might now start to worry that the ‘house of cards’ at Arsenal is falling down but I’m not going to perpetuate the doom and gloom when the tabloids and other websites can do that themselves. Will Henry’s departure mean a mass exodus of players? I don’t think so, why would it? Of course any team is going to miss a guy like Henry and on a personal level too some of them will be disappointed but players themselves know how quickly things change and if Henry is replaced and squad augmented then the initial ‘hurt’ will pass.

It will be very interesting to hear from Arsene Wenger and what he has to say about the deal and possibly his own future. He still has a year left on his current contract and despite overtures from Real Madrid he’ll honour that at the very least. After that who knows but I can’t imagine that he’s the kind of man who would sell someone like Thierry Henry one summer then fuck off the next. Will the uncertainty surrounding his future affect the kinds of players he can bring in this summer? Will top players come to Arsenal if they think that Arsene might leave next season? I dunno, I think if a player wants to come to Arsenal he’ll come anyway. As I said I think it’ll be interesting to hear what Arsene has to say whenever we get a chance to hear something from him.

We also need a new captain, don’t we? For all his greatness on the pitch I think one thing most fans would agree on is that Thierry was never captain material. While it might have been used in an effort to help keep him at the club at the time we really didn’t have anyone else to give it to, in fairness. I have no doubt he was very proud to be Arsenal captain but I think he’d even admit himself he wasn’t very good at it. Gilberto seems the obvious choice although it wouldn’t surprise me a great deal if it went to Cesc, at which point we can only hope the curse that besets post-Adams captains leaves him be.

So, the end of an era, very much. It’s been a blast, Thierry, thanks for the memories. Now, let’s move on.