I can’t even bring myself to write anything about the first half against Wigan because I would just offend somebody. To say it was like watching two pub teams hack the ball around on a Sunday as they all try to run off their Saturday 15 pints and kebab hangovers would be an insult to pub teams. It was to football what Jose Mourinho is to not being a complete and utter fucking cunt.

There was more action in the first three minutes of the second half than there was in the whole of the first. And the second half was shit as well. It only seemed good because the first half was so bad. It would be like someone giving you two drinks in a Pepsi challenge styleeeeee and asking you which one you preferred. In the first glass you’d get a mixture of elephant piss, liquidised dog shite and horse spunk and in the second a glass of water. Just horrible.

We were absolutely rubbish all night long. There was no urgency, no drive, no pace. We looked wooden, one-dimensional and incapable of causing a Wigan team, who are extremely average, any sort of problems. In fact they had the better of the chances. It wasn’t until Cesc came on that we looked like we might score. He played one lovely ball to Adebayor, who worked hard but showed again why people get frustrated with him – why didn’t he stick out a leg for Theo’s pass? – , only for the Togonalian to trap it about 8 feet in front of him allowing Kirkland to save. 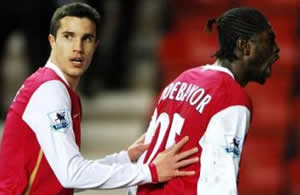 When Cesc played another great pass through, after winning the ball with a fantastic tackle, we were lucky that Ade’s first touch was minimal meaning the ball landed at his feet and he nutmegged the keeper to score the winner in the 89th minute.

After being ground down by the previous 88 I managed some small whoops of celebration – and I should add that Adebayor, while frustrating, should be praised for not giving up and not letting his head go down like some other players would. Glad he scored.
Perhaps it was the hangover from Sunday, perhaps there’s some problem with motivating this team to play ‘lesser’ clubs, perhaps someone should tell Eboue how to play football (I would be more than happy to see Justin Hoyte ahead of him now especially as Lauren’s return is feared to be as far away as ever), but it does seem a bit churlish to complain too much after a win which puts us into third place. However, it would be wrong to overlook how poor we were. I was thinking of the 0-0 as the match drew to a close and writing today’s blog. I was going to say something about this team being 70% potential, 20% quality, 10% past it and I think that’s right. You can all decide yourselves who fits into what category but it’s pretty obvious.

We can’t rest Cesc because he is what makes this team tick. He is our creative outlet. Without him we’ve got nobody to make the killer pass and the team know it. Nobody makes the runs, nobody goes forward because they know there’s nobody to give them the ball if they do.

And can I put on record once again my absolute loathing for the 4-5-1 formation. I’ve said previously I understand it against teams who are good but Wigan are not very good at all and we went there playing a formation which, to me, is horrible and negative. This is not the way Arsene Wenger has had his teams playing football for the last 10 years. If what came before was the caviar this is not even sausage. It’s that jelly stuff that’s inside pork pies. I hate it. I fucking really and truly hate it.

Some people would suggest that Cesc is too lightweight for a 4-4-2 but I don’t agree entirely. While I take their point I feel that what the 4-5-1 offers in terms of defensive stability takes away far too much from our attacking play. Come on, this was Wigan and this Wigan side is not as good as the one they had last year and even then they weren’t particularly good. They’re a bottom six side, in reality, and for us to go there and play such a negative formation does my head in.

If the manager feels we don’t have the players for a 4-4-2 then there’s an easy solution. Open your chequebook, Arsene, and sign some players who can come into this side now and make a difference straight away and not in two or three seasons time.
Afterwards the boss said…

A year ago, we would have lost this game 1-0

…ignoring the fact that a year ago we won this game 3-2. I know we’ve played three games in a week and it obviously has an effect. I also know that you can look at it and say ‘Well, we played shite but we won’, but the team and some of these performances worry me.

Overall I thought Wigan had the best chances and I thought we were lucky to win. That said I’m quite happy to take a lucky win and if there’s some confidence to be gained from winning ugly then I’m all for it. It doesn’t make it any easier to watch though.

Next up is Portsmouth, who are flying high, and it means the return of an old boy in Sol Campbell. More on that in the days to come.

In other news William Gallas still has no idea when he’ll be fit again despite the boss saying he was ‘very close’. Speaking to a French newspaper he said:

Iâ€™ve got no idea when Iâ€™ll be back playing. Arsenalâ€™s medical staff have not told me and they donâ€™t know much more than I do. When I got injured they said Iâ€™d be out for a minimum of four weeks â€” and now I am into the fourth week. I donâ€™t know whether Iâ€™ll play again before the end of the year.

He also said Arsenal need to do better against the smaller teams in the league. I suppose last night was a good start albeit not at all convincing. I suppose if we can get through the Christmas period well and then welcome back a fully fit and raring to go Henry along with Gallas and Rosicky then we could really build some momentum. If. If. If.

Again having some technical issues regarding the arsecast but hopefully there’ll be something for you tomorrow. On that note I better go look under the bonnet and see what I can find out.