Ray Parlour (remember him?), is close to full fitness again after an 11 week injury lay off. Which is good, for Ray I guess. I’m not quite sure how exactly he’s going to get back in to the team without an outbreak of bubonic plague round N5 though.

Martin Keown is all set to play against Man Utd on Saturday. Which is great news. The thoughts of a Stepanovs & Cygan partnership at Old Trafford would curdle the bowels of any Arsenal fan. Lauren played in the reserves as well, so we’ll wait and see if he plays or if in-form Oleg keeps his place.

Now, here’s the real story of the day. To your right is Arsenal and Republic of Ireland Under 21 goalkeeper, Graham Stack (not Barrett). He’s currently on loan at Arsenal’s Belgian feeder club, Beveren.

So, Beveren are playing Royal Antwerp (which happens to be Man Utd’s Belgian feeder club) and true to form, the Belgian gunners are cruising to a 3-1 victory. Suddenly, a bunch of Royal Twerp fans invade the pitch after showering our brave keeper with various missiles during the game. Graham confronts one of them, telling him to get off the pitch. From the corner of his eye he sees another one charging towards him and realises this bloke is not going to stop.

So, he swings a punch, knocks the fella flat on his arse unconscious and the game is then ended due to the fact there are riot police everywhere. Fantastic. 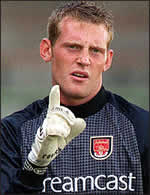 Football needs more stuff like this. Seeing as the FA, FIFA and UEFA are trying their level best to make it a non-contact sport, it’s up to the players to keep the proud traditions of thumping people alive. How long has it been since we’ve had a proper brawl? Man Utd in the 91 season? 21 blokes going mental, while little Anders pretends to invisible.

Proper thumping, like this (many thanks to Ashburrn, who has changed this from a 1mb MPEG to a 200k WMV file). Enjoy.