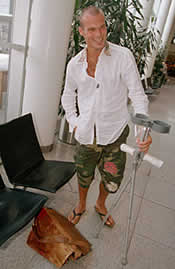 To your left is a crutch bearing Freddie Ljungberg, pictured after his recent operation. He’s hoping to start some light training next week, and hopefully he’ll be back by September.

Some further quotes from yesterday reveal that there might well be one more signing before the July 31st deadline. We’re light in midfield for the start of the season, because of the injuries to Freddie, Bob and Gio, but when they come back, we’ve got healthy competition in that area of the field.

It looks like Kanu can go for any reasonable offer, so I would expect someone like Aliardiere to take over the 5th striker position if the big Nigerian leaves. I still don’t like Wiltord up front – he really was most effective on the right – so perhaps the young French striker can make a big impact this season. He’s bound to get a few chances once Jeffers starts picking up injuries again ;o)

One of Arsenal’s original Musketeers shows he’s not too shabby with a sword either. Well played, Sir. We at A R S E B L O G most heartily endorse this kind of behaviour.

Yet more Cripplectomy. Nice work, but what the hell is that website about? As for this……

Finally, Arsenal yesterday unveiled a proposal for a winter break in the Premiership. It’s a nice idea but the ideal solution would be to reduce the number of teams in the league, meaning it could start later and give the players a decent holiday at the end of the season. The summer break is bad enough, I couldn’t even contemplate going through January without football. Just say no…..