22.00 – A few beers down the town and the heartbeat is back to normal. Some reaction to today’s victory here.

Meant to post this earlier on, but forgot. A rather good interview with Tony Adams in the Guardian. And for some more Arsenal reading, check out this interview with our recently arrived Ivory Coast midfielder, Kolo Toure.

I’ll have to wait till tomorrow to see the highlights on Sky, but for now, enjoy that post-Tottenham glow, and check out the league table. 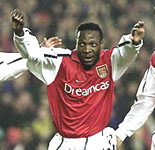 Sorry for the lack of updates, but I was too nervous before the game to say anything without jinxing the result somehow…..

Back in March, somebody asked me to do a Lauren wallpaper, and I refused, coz I couldn’t make up my mind if I liked him or not. At that time I wrote “So, for the moment, Lauren wallpaper is a non-runner. Of course, when he scores the goal that wins us the league, I might just revise my way of thinking…..”

I think he might just have scored the goal that wins the league for us. 3 points was vital today and after they came back to 1-1 I feared the worst. Then the ref evened up the penalty count and with Henry off the pitch getting treatment, Lauren stepped up and drilled it down the middle.Expect a Lauren wallpaper ASAP.

2-1 to the Arsenal was the final score, after 4 light years of injury time. So, stick that up your arse Teddy, you might have won a load of medals playing for Man Utd, but I still hope you catch ebola. Sounded like a good performance today – Oleg sounded like he
had a stormer at the back and nearly scored, Edu was spraying
passes around like some kind of pass spreading machine, Henry
was causing mayhem, Wiltord was running around a lot doing bugger
all, Freddie was making those runs….and the radio coverage was
nerve wracking right to the very end.

I’ve run out of rizzlas – so I’m off down to the tabac. More later.