Pre-season: So many goalkeepers, Tierney is back

Arsenal are in Germany, training ahead of Saturday’s pre-season encounter with FC Nürnberg, who play in the second division over there. There’s not a great deal of news, but here are some brief thoughts based on the training pictures that are available.

We have a lot of goalkeepers

Aaron Ramsdale has not returned just yet, but we still have Bernd Leno, Arthur Okonkwo, Karl Hein, Alex Runarsson and new boy Matt Turner right now. I’m all for depth in key positions, but that’s a little too deep (maaaaan). I don’t think there’s any chance Runarsson will be here next season, whether it’s a loan or a permanent deal he’ll be elsewhere if he wants to play regularly. He did play 20 times for OH Leuven during a loan spell last season, so hopefully for him something similar will come along.

The key departure is Leno though. With a World Cup on the horizon, he must want to try and fight his way back into contention for Germany, and he’ll only do that by playing. There were links earlier in the summer to Fulham, but that seems to have gone very quiet. Beyond that, I haven’t really heard any rumours or whispers about where he might go.

He is one of a clutch of players with just a year left on his deal, and as much that contractual situation more or less demands a sale. He is only 30, still relatively young in goalkeeping terms, and there really ought to be plenty of interest in him, but whether said interest matches Arsenal’s financial expectations is another matter. Whether they match his financial expectations is another consideration too. One to watch.

Does everyone returning mean everyone?

If, for example, a player like Alex Runarsson – whose future obviously lies elsewhere – has returned, what of someone like Lucas Torreira? He was quite categorical last week about the possibility of staying at Arsenal, but if other players who are likely to depart are back and doing the hard work, isn’t he contractually obliged to do the same?

His move to Fiorentina fell through, and there’s barely any talk of other clubs, so while he might not like it, and Arsenal have basically told him there’s no future for him in red and white, this imperfect relationship may have to continue until some solution is found.

Kieran Tierney is there

He had knee surgery in April which saw him miss the final weeks of the season, and his absence was keenly felt. However, he’s back in the group now, and fingers crossed heading towards full fitness ahead of the start of the new campaign. The Tierney Paradox is a real thing though: he is unquestionably a first name on the team sheet kind of player when he’s available, but as we head into his fourth season at the club, you have to factor in the absences and thus mitigate your dependence on him.

It isn’t simply an Arsenal thing either. Throughout his career, he is someone who picks up injuries: 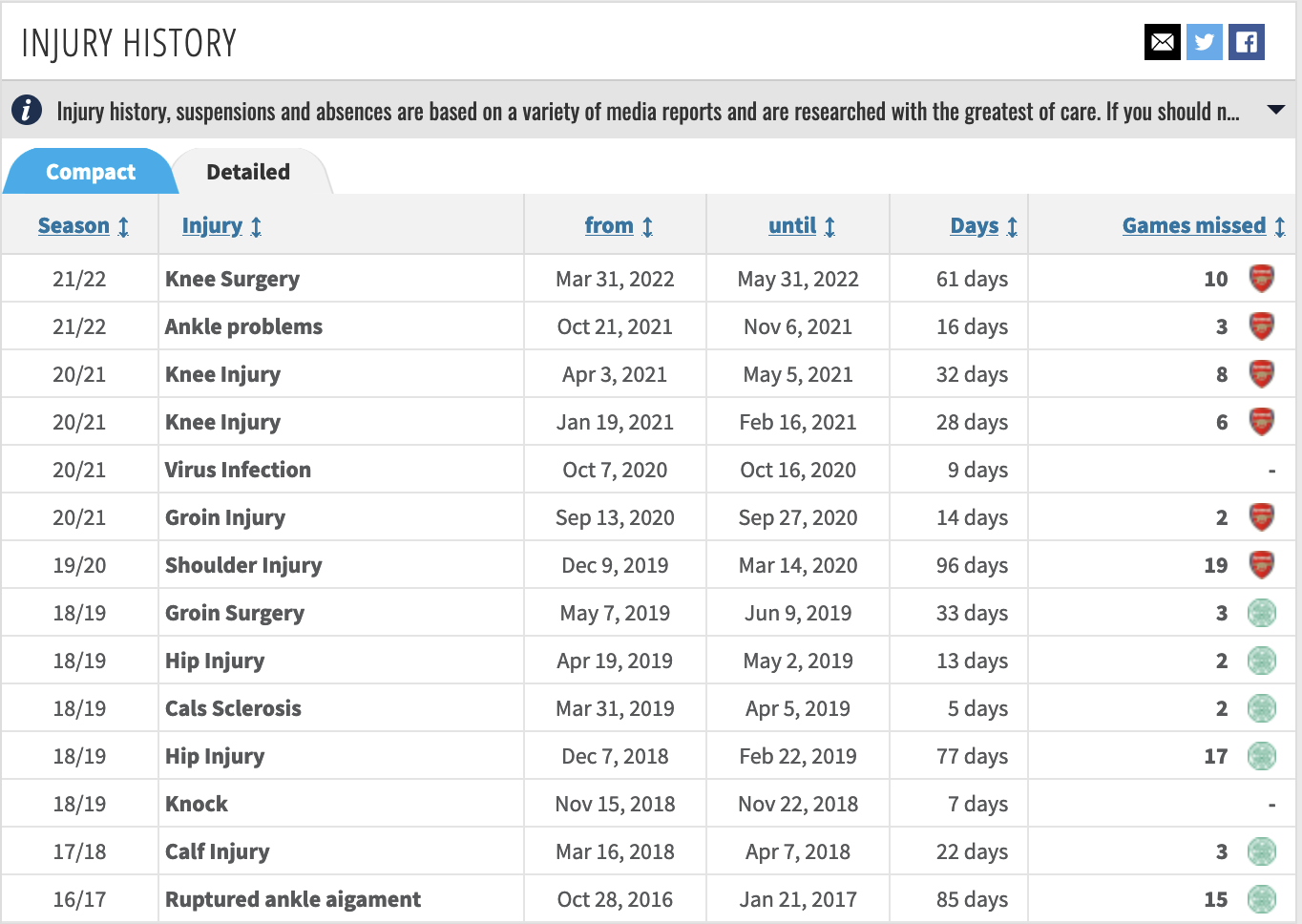 I would like nothing more than for Tierney to stay fit for the entire season, but at this point I’d almost put him in the same category as someone like Aaron Ramsey. A fantastic player but you cannot be too dependent on his availability because all the evidence tells you that would be verging on foolish.

We have to wait and see what the plan is for Nuno Tavares this season. Will his first campaign be viewed as one of adaptation to Arsenal and English football, or one which makes the manager and his staff doubtful about his ability to step up to the required level? A loan move somewhere would not surprise me in the least.

The pursuit of Lisandro Martinez makes a lot of sense if we view him as a potential left-back option, even if the Argentina international has played most of his football as a central defender. So perhaps Nuno’s future depends on the shoot-out between us and Man Utd over that signing.

In building this squad, Arteta has two very fine first choice full backs at his disposal, but I would have concerns about the drop off in quality and style between them and the two deputies. There’s been no talk of a new right back this summer, and my optimistic head tells me one more year with Cedric in the squad allows the highly-rated Brook Norton-Cuffy another season on loan to develop further and then return to deputise for Takehiro Tomiyasu.

With other fish to fry in this market, and more important positions to fill, we can’t realistically bring in two full backs, so maybe this is the window in which we try and sort out the left back issue. Whether it’s Martinez or someone else, let’s see – and let’s also keep fingers crossed that KT stays fit.

He looks good in the training kit. That’s all.

Right, let’s leave it there for this morning, have a good one.

Previous articleGabriel Jesus is here!
Next articleSome activity in the departure lounge?