After stepping back from the race to sign primary target Lisandro Martínez, Arsenal worked quickly to complete a deal for Manchester City defender Oleksandr Zinchenko.

But who is the Ukrainian, what will he bring to the side and why is he costing £30 million?

Whether you agree with their process or not, Manchester City and City Football Group are here to stay. Since their inception in 2013, CFG have acquired majority stakes in several clubs across the world who then become convenient landing spots for emerging young talent signed by the club. Oleksandr Zinchenko was one of said signings, costing just £1.7m from FC Ufa in 2016 after leaving Shakhtar Donetsk due to conflict in Donbas. He was a low-profile arrival, someone who would ideally spend time out on loan before spinning them a quick profit – until he wasn’t.

After enjoying a season away with PSV Eindhoven, Zinchenko has been at City in the five years since and collected nine major trophies for his troubles. Granted, the 25-year-old has not been a crucial figure under Pep Guardiola but often worked his way into the side thanks to his suitability for what was required at left back – using his midfield experience to aid ball progression and maintain control by boxing the opposition into their own half. He is not a natural defender but his presence became a marriage of convenience as other options came and went, with the Ukraine international averaging 25 appearances across all competitions each season.

🗣 "It was nice yesterday with Alex [Zinchenko] because we could say goodbye properly."

Pep Guardiola pays tribute to Oleksandr Zinchenko after he agreed a move to Arsenal pic.twitter.com/PSpasVsOhX

What instantly stands out whilst watching Zinchenko is the quality of his passing. Despite City setting up in a traditional 4-3-3 under Guardiola, that quickly turns into a 2-3-5 formation which allows both full backs to tuck inside and involve themselves in build-up. Fortunately for the Ukrainian, this system maximises his strengths in central areas while limiting his weaknesses in wide areas.

The 25-year-old currently sits in the 99th percentile for pass completion (89%), progressive passes (8.0) and assists (0.35) per 90 among positional peers across Europe – FBRef data – while his 3.43 shot-creating actions per 90 leaves him in the 96th percentile; that’s no ordinary left back. And it’s important to consider that he isn’t one despite the numbers jumping out.

This is a midfielder by trade, entrusted with first phase responsibility for one of the best teams in world football. His ability to drift inside and combine with others helps to create middle-third overloads, while his composure ensures a measured final ball when approaching the byline. Bukayo Saka will also be licking his lips at the prospect of receiving long, raking diagonals, of whom Riyad Mahrez was often the beneficiary during their time together in Manchester. 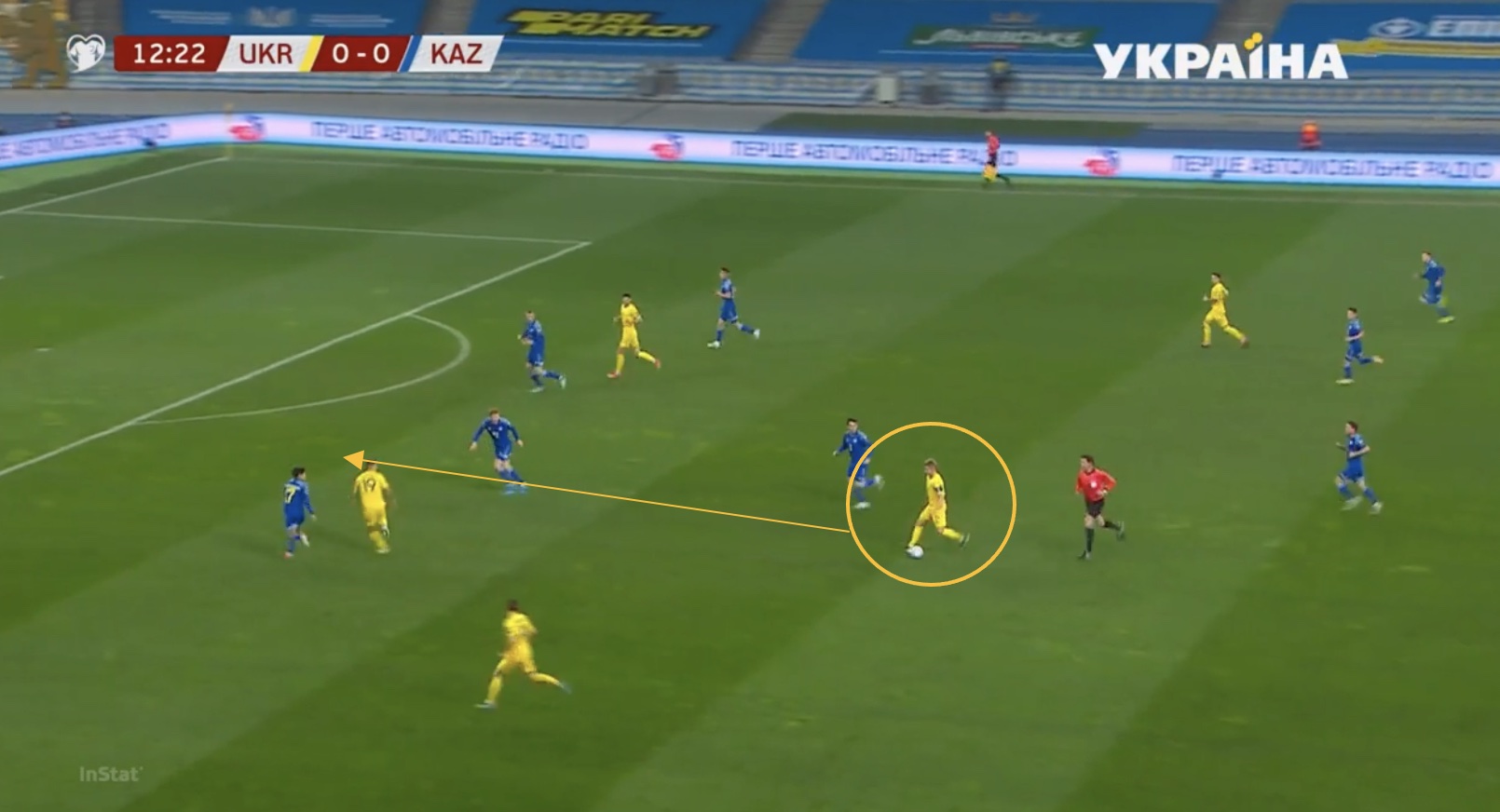 Zinchenko also boasts high levels of technical quality. He is not particularly quick, but shares a resemblance with (pre-injury) Jack Wilshere in how their short bursts and body swivels can evade pressure. His ball retention in wide areas is strong and when cornered by opposition wingers there is no panic, he will often find a teammate in crowded areas or manipulate the ball into space with quick footwork – he currently sits in the 97th percentile for passes completed under pressure (8.66 per 90). However, unlike Nuno Tavares or Kieran Tierney, the Ukrainian is far less likely to put his head down and run – as illustrated by his 0.87 dribbles attempted per 90 – although he will occupy central spaces should midfielders push forward.

But despite his suitability as an inverted left back, there are still improvements to be made. Under Guardiola, City deploy an aggressive press and squeeze the play whenever possible to force high turnovers. It’s high-risk, high-reward, although their press is occasionally bypassed which leaves their own defenders exposed. The likes of Kyle Walker and Rúben Dias are capable defenders in space, but Zinchenko lacks that natural athletic capacity and struggles when isolated; especially against quicker, more direct wingers.

Having played mostly as a number ten throughout youth level, it’s understandable that the 25-year-old falls short defensively. Interestingly, only two players – Giovanni Di Lorenzo (19) and Marco Verratti (18) – made more successful tackles than Zinchenko (16) at Euro 2020; which hints at the issue being one of technique as opposed to intent. In direct duels, his body shape is too square and he often finds himself in knots, while his ‘gambling’ pressing style – mostly through instruction – takes him out of the game too easily, if he arrives even a millisecond late. Another habit he will have to curb is lazy lunges on halfway which creep into his game when tired. 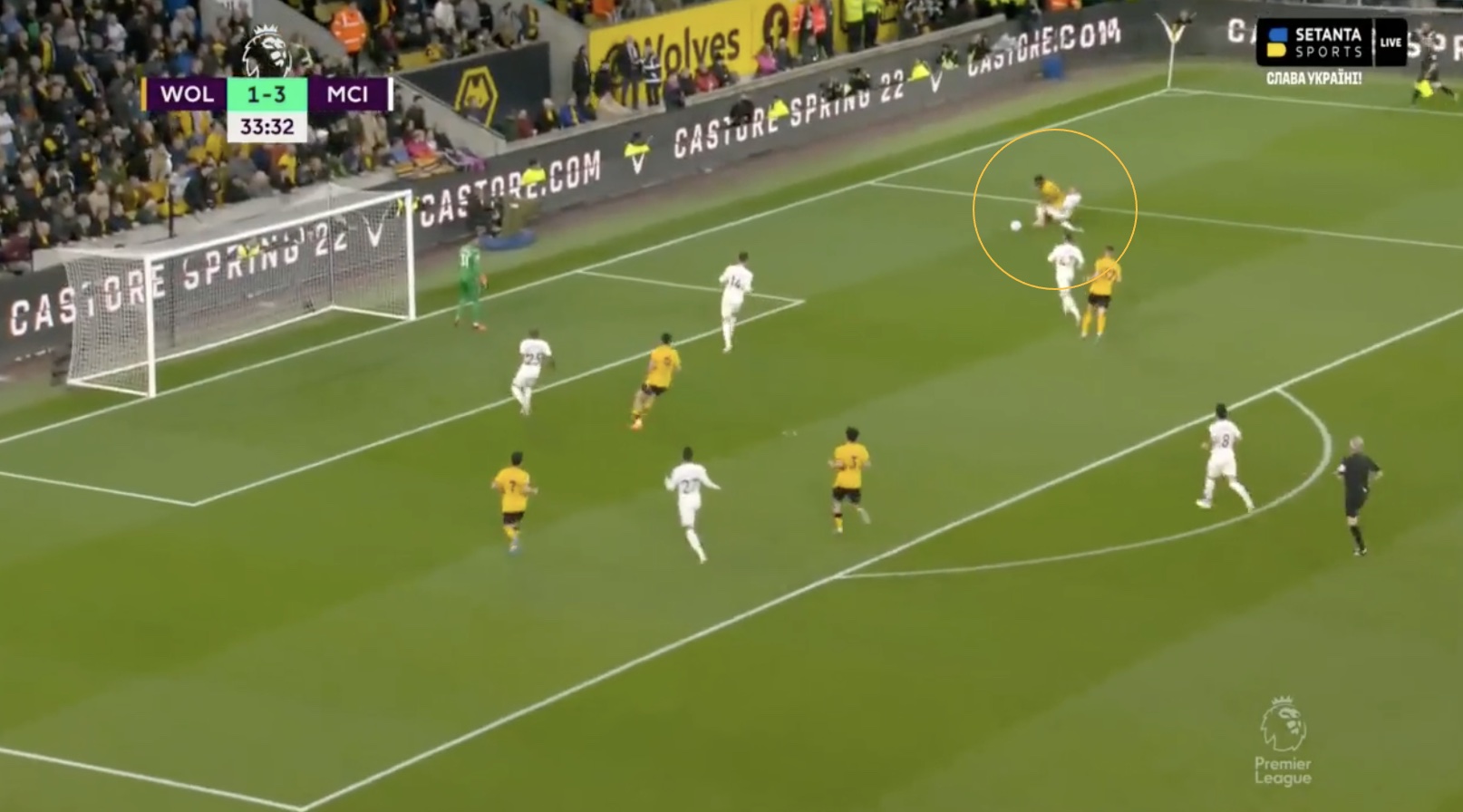 “Oleks is a midfielder, definitely. When we bought him he was more of a creative player but we needed him at left back,” said Guardiola when asked about Zinchenko in April.

“He is a focused guy giving everything for the team, otherwise he would not have played in the Champions League final.”

And much like Gabriel Jesus, those adaptable, selfless qualities will have been crucial in any scouting reports. Mikel Arteta has worked with the Ukrainian before, who is often regarded as one of the most technical players at City, and understands that this player gives Arsenal further opportunities to control and manage games. Too often last season, his side were forced to retreat and turn to Rob Holding to protect what they had due to their inconsistent technical level. Zinchenko should provide a much-needed tonic in that area.

Through his own versatility, he also offers the side tactical flexibility in how he plays different positions. As the left back, the 25-year-old could mirror his more offensive, inverted role at City, allowing Takehiro Tomiyasu to drop and make up a back three. In contrast, as the left eight, he offers more creatively than Granit Xhaka and could become more influential in the left half-space as he is for Ukraine, with defence-splitting passes and neat combination play.

Lisandro Martínez is a player with clear potential but as the numbers surrounding his future inflated, the speed in which ‘Plan B’ was activated by Arteta, Edu and the club should be commended. They have signed another proven, Premier League player who has earned the right to step beyond the shadows, whose technical quality and leadership instantly improves the squad. Some defensive kinks will need ironing out, but ultimately, this move made sense from the moment it was first reported.

Sometimes the best option really is the obvious one.