Partey out, Sambi in

Last night I watched some Champions League on my laptop while playing Rocket League on the Playstation. Major props to Karim Benzema, and a big GFY to the bloke in my doubles who quit when we went 4-2 down. Still, I made a world class save, basically the cartoon car version of Ramsdale v Leicester, then went on to win 5-4 in extra-time. Eat that.

In real life, Benzema’s hat-trick against Chelsea was tremendous fun. His first goal in particular was just glorious – video here (although the second is pretty decent too!) Look at a striker dropping in to combine but playing a forward (!) pass then running into the box with sufficient pace and timing to be there to apply the most fantastic headed finish. This man is 34, he belies the notion that once a striker gets to 30 nothing more can be expected of him than some reasonable combination play for a few weeks. It IS possible to drop deep and also provide some penalty box presence.

Obviously, there are quality issues at play when making slightly spurious but not entirely unreasonable comparisons between him and our own French striker, but when you see performances like last night and the one he put in in the previous round against PSG, it demonstrates that even if you are physically not what you once were, it’s not a complete impediment to making a substantial impact. This is top level stuff too, not meaningless goals against cannon fodder or lower league opposition.

Yesterday, we spoke about what Mikel Arteta might do in the absence of Kieran Tierney for the rest of the season, but another key issue he’s likely to face is the injury to Thomas Partey. The midfielder came off in the 76th minute having signalled a problem just before the move that led to Palace winning a penalty to seal the game on Monday night.

He felt something in the same area that he got injured previously, so it’s a big concern.

The team news update after said he was being assessed having ‘aggravated his thigh’, and if it harks back to the previous thigh injury he suffered we could be in some bother here. Looking at his injury history on Transfermarkt, his longest absence is listed as a ‘hip injury’:

However, when it occurred (in the North London derby on Dec 6th 2020), it was reported as a recurrence of the thigh injury that had kept him out for almost a month before that. That’s a combined absence of two months, but the second period of 36 days would be sufficient for him to miss the games against Brighton, Southampton, Chelsea, Man Utd, and Leeds – and perhaps see him back in time for the derby on May 12th.

That may well be a worst case scenario, so until we get official confirmation, there’s no point in panicking too much, but clearly any run of games without him is going to be more challenging. I found this graphic on r/gunners, and it highlights his importance to the team this season: 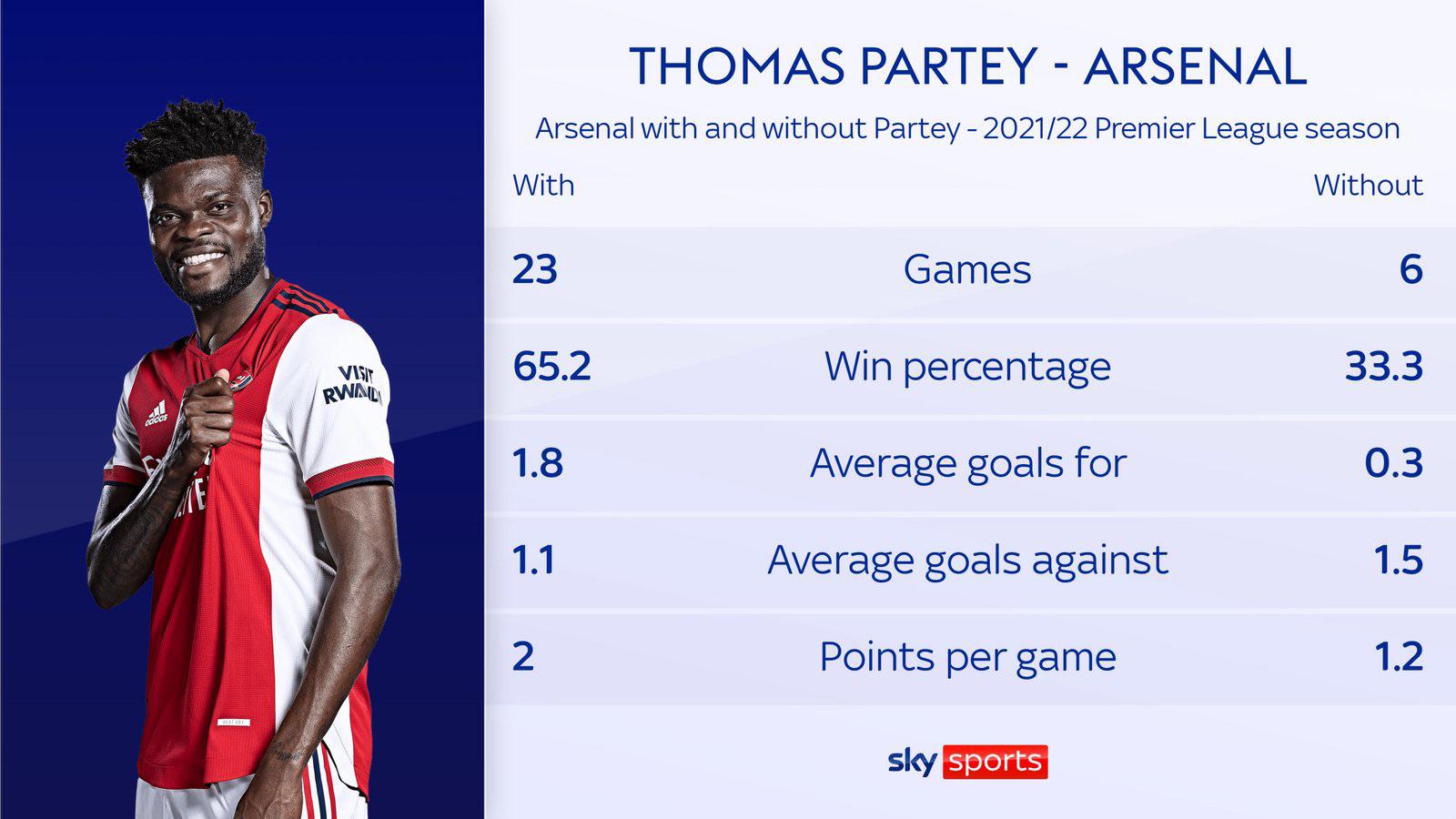 It is worth pointing out that three of those six losses came in the opening three games, when he wasn’t available because of the ankle injury inflicted on him by some Chelsea gimp, and those early weeks of the season aren’t – in my opinion at least – truly reflective of this team right now. So, the stats are a little bit skewed, but it’s fair to say that he has been important this season, and fundamental to the side since he gave himself a 4/10 player rating and then upped his game significantly since the new year.

We will miss him if he’s going to be out for any length of time, and again the question Arteta faces is what does he do to offset that? I thought it was interesting the other night that he chose Albert Sambi Lokonga to come on. Not in a big way, but at 3-0 down, away from home, he could easily have turned to the relative safety and experience of Mohamed Elneny, just to see the game out.

Instead, he went with the summer signing who looked pretty sharp, and it’s probably significant in terms of what we’re going to do next. Lokonga hasn’t featured much of late, mostly because he hasn’t had to. Partey and Granit Xhaka have been good, and he’s a ‘victim’ of that, so to speak. He’s started just once in the Premier League since November (in the 0-0 against Burnley when Partey was suspended because of his EFL Cup red card), but it looks like his time has come.

It’s not uncommon that a young player signing for a club starts pretty well then hits something of a plateau – there may be something similar going on with Nuno Tavares if we’re looking at that with our glasses half full. I’m sure Arteta and the coaching staff have been working with him throughout this period, and hopefully that experience and time to just consider his situation has been beneficial to him. At the very least, we can bring in a player who has fresh legs and couldn’t be in any way fatigued as we head into the final run of games.

It’s how he’s going to be deployed that’s the real question. Do they think he can just slot into the Partey role with Xhaka staying further forward? Maybe they do, but perhaps the more sensible option is to drop the Swiss a bit deeper, not least because he may be needed to offer a little more protection in the left-back area based on whatever selection decision the manager makes there.

Sambi has some big boots to fill in this Arsenal midfield, but to me he’s the obvious option. Faith in young players has brought real rewards so far this season, and we’ve seen enough of Xhaka and Elneny down the years to know what it can and can’t do.

Righto, have yourselves a good Thursday. Back tomorrow with more, including a brand new Arsecast. Until then.

Previous articleTierney out for the season – what now for left back?
Next articleStick or Twist?