The scoreline might suggest a close game, but it wasn’t. Brentford’s injury time, VAR-generous consolation was just that, and while Arsenal had some difficulty in turning dominance into goals, there was only one team who deserved the points yesterday and that was us.

Emile Smith Rowe came back into the side to replace the suspended Gabriel Martinelli, and while Takehiro Tomiyasu was on the bench, Cedric continued at right back. The rest of the team was pretty much as expected, and from the start we pinned the opposition right back in their own half.

A lot went on in the early stages. As Arsenal put the ball in the back of the net after a lovely move, there were two VAR checks for penalties still ongoing: one of a foul on Ben White, one for a foul on Lacazette. We didn’t get the privilege of seeing too many replays, but I’d really like to have got a better view of the second one because it looked like a clear foul to me. However, with Jon Moss on field and Lee Mason in the VAR control room, I don’t think we had any chance of any decision going our way. Even the offside when Lacazette put it in looked very, very tight – again though, no replays, no lines drawn. Nothing. Watching again, maybe it was Xhaka in the build-up.

I don’t want to keep going on about it, but the officiating this season is genuinely exhausting. Late in the first half I thought we were sure to get a penalty when a Cedric shot was blocked by a defender who slid in and whose arm was not just in the air, but moving towards the ball when it blocked the attempt on goal. Again, nothing. ‘You’ve seen them given’, sure – just not for Arsenal.

On top of that there were moments when we could and should have done better with positions we got ourselves into. Martin Odegaard, otherwise superb as he glided around the pitch like some kind of engineless fixed-wing aircraft, had a chance to shoot with his right foot but played a pass to Saka instead. Lacazette had a pop from outside the box but he had Smith Rowe one side and Saka the other, and should have made a pass. 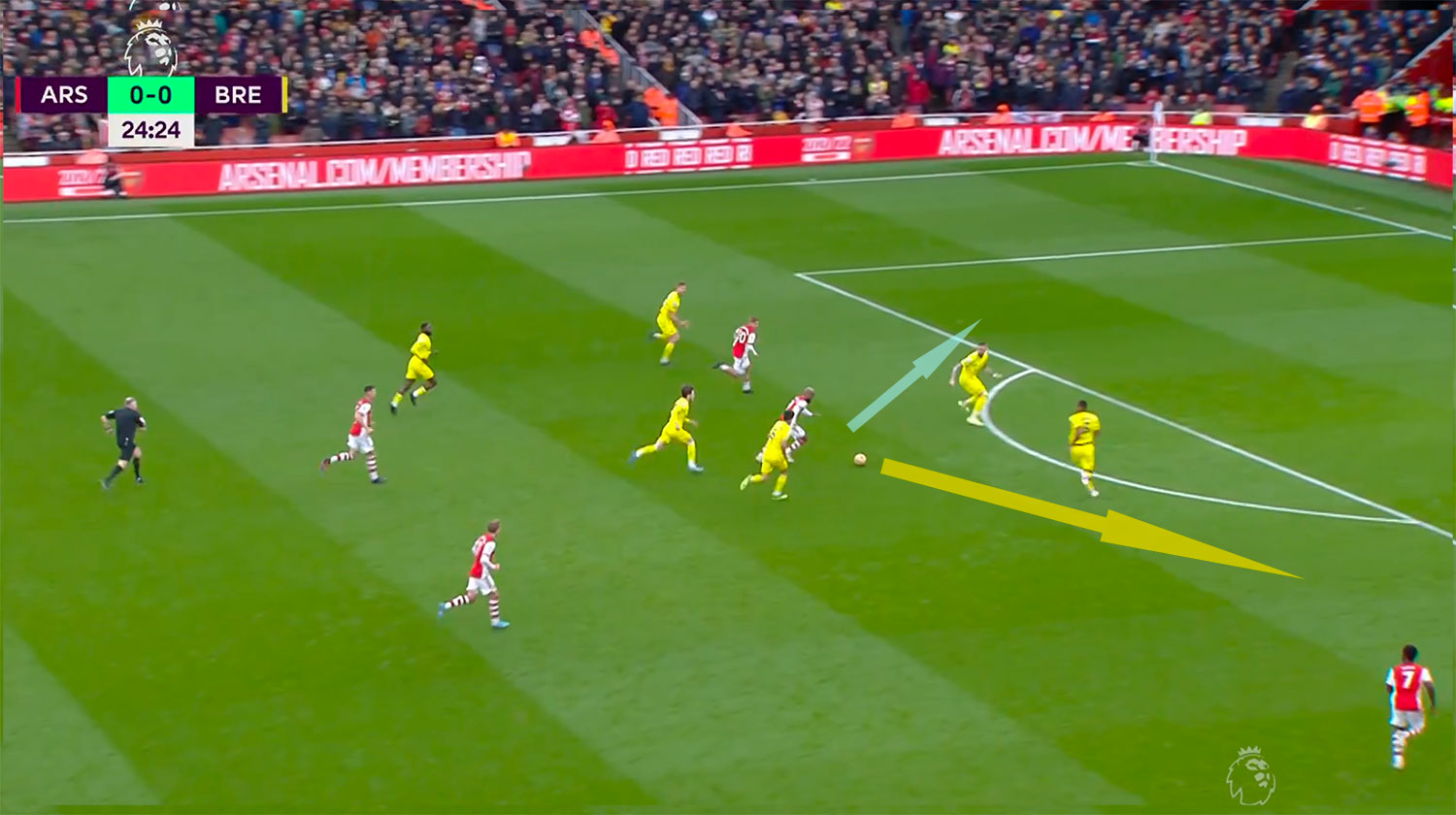 It meant that despite 16 attempts on goal, apparently a season high for any team in the Premier League this season, we went in 0-0 at the break. On the one hand, our control and dominance was encouraging, but it was hard not to think of Burnley and our inability to break them down. We were throwing in a lot of crosses (Cedric made 16 alone in the game!), and it felt like we needed more precision, more craft.

Early in the second half, that’s exactly what we got when Smith Rowe put us ahead. The 20 year old picked up a pass midway inside the Brentford half, in the inside-left space, used the overlapping run of Tierney to drive on, cut inside their box, and curl a shot into the back of the net. He said himself afterwards he was a bit surprised the keeper didn’t stop it, but he was rewarded for his endeavour. It looks more and more like the goals we’re going need will have to come from the players behind our nominal centre-forward, so moments like this are extremely important.

It was his 10th of the season, and his growing stature in this team was exemplified by this goal. In our preview podcast on Patreon, I compared him a bit to Robert Pires and I don’t mean to heap pressure and expectation on him, but as a right footed player capable of going either way from the left-hand side, coupled with regular goalscoring ability, it’s hard not to draw some parallels between the two.

Needing a second goal to make the game safe, Pepe replaced Smith Rowe after 75 minutes, and he should have had a tap in if Odegaard had trusted his right foot a bit more:

I know he had a shot from here and the keeper made a decent save, but I think he should have made the pass. As I said, the Norwegian was otherwise excellent – that first half pretend-kick dummy was worth the price of admission alone – and I don’t say this to be critical per se. We should be looking at these as teachable moments, where with better decision making we can start to make more dangerous opportunities and become more clinical as a team.

Eventually though, the second goal came. Lacazette got himself between the defender and the ball as it came into midfield, Partey took it on, played it to Saka whose shot cracked in off the bottom of the far post to make it 2-0. Absolutely no less than we deserved, and it provided that sense of comfort I think we needed as fans. After the 1-0 against Wolves, having a bit of a cushion was a nice feeling, even if their late consolation was a very slight blemish on the scoreline.

The focus should really be on two exceptional young players who won the game for us yesterday. When you think what it would cost you to go out and buy two 20 year olds with that level of talent, end product and maturity at that age, oooof. Stan would have to pawn his new LA stadium to get anywhere near it. They gave us what we needed yesterday, and stepping up as game changers and game winners is just so encouraging because they are both still some way from being the finished article. It’s fantastic to watch these Hale End boys do what every kid who comes through that Academy dreams of.

Afterwards, as the the strains of Smith Rowe and Saka rising above the status quo rang out in the background of his press conference, Mikel Arteta said:

Thank you to the supporters again for the atmosphere they created. I understand they love that song and everybody loves that song because they are players that have been raised in our system and I’m really happy that we have players that come and take the responsibility and they manage to win games for us, which is really impressive at that age.

For me, the single most important thing about yesterday was taking three points, and we did exactly that. I do worry a bit about our firepower and what happens if these guys don’t get the goals, but you can also see how we could have made this scoreline much more comfortable – and I’m choosing to see that as a positive too.

We talked about 17 cup finals when football returned after that little break. It’s two down, 6 points gained, 15 to go. Onto the next one, Wolves on Thursday.

That’s it for today, more tomorrow and of course James and I will be having the time of our lives on the Arsecast Extra too – so please just us for that. In the meantime, have a great Sunday.