Can we get this Partey going?

Morning. A quick one for you today.

On yesterday’s Arsecast Extra, there was a big discussion about Thomas Partey, prompted by a lot of listener questions about Thomas Partey. It’s an interesting one, because I’m not sure a game against Anfield is necessarily the right one to take the measure of an individual player, in particular one who has just come back from an injury and who probably was a bit rusty. It might turn out to be a good ‘match fitness’ exercise, which would be very handy with some other tricky fixtures on the horizon.

Nevertheless, a big game like the one we played on Saturday is when you want to see your big players, your senior players, really make a difference and he didn’t. As James pointed out, Liverpool worked hard to deny him possession, pushing us to use our full backs rather than the central areas, and Partey plus a young Albert Sambi Lokonga against an experienced three man midfield were always going to find it tough.

On the night though, he completed 94% of his 34 passes (he was only behind Gabriel 52, Ben White 44, and Nuno Tavares 42 in that particular stat), so it’s not as if he was massively wasteful or anything, or hugely under-involved. He also had a shot on target, as did Sambi and Pierre-Emerick Aubameyang, but his role in Liverpool’s second – where he simply stopped when I think he could have done more – wasn’t mentioned much. He didn’t look quite at the pace of the game, and perhaps we can put that down to coming back from injury.

Which is fine in isolation, it’s just that coming back from injury has been a thing for him a bit too often during his time at the club. Remember, he joined on October 14th 2020 because of the extended transfer window after the lockdown and cessation of football, so he’s only just been here over a year. As a club we’ve had a part to play in some of his injury issues, not least bringing him back too soon to play in a North London derby when he broke down again, and in general I think he found it harder to adapt to Premier League football than many expected.

When you look at his injury history (via transfermarkt), the difference between his five years in Madrid and his 13 months at Arsenal is quite stark:

It seems clear to me that this has been the major impediment to him performing at the level we all expected when he joined. As I said in the podcast, my general sense is that so far he has been an underwhelming signing. Which isn’t to be critical of him, per se. You can sign a hugely talented player, but if he’s in and out of the team because of injuries and can’t really build any rhythm, that obviously influences how successful he’s going to be on the pitch. He’s been unlucky to some extent, no player wants to get injured, and it’s not as if these are a consequence of a poor lifestyle or some other issue that is in his control.

I think he’s a very talented player who we haven’t seen the best of. James made the point that he misses a more senior partner like Granit Xhaka, and that may well be the case. However, he is a £50m signing, an experienced international, and as one of the senior men in a now very young dressing room, there is a measure of responsibility on him to perform.

Xhaka won’t be back until January, at which point Partey will be gone to the AFCON, so I’m really hoping that between now and then he can stay fit, and provide us with a bit more in a crucial area of the pitch. As Saturday showed, Sambi is still quite raw, while Ainsley Maitland-Niles and Mohamed Elneny are guys who can play with someone else rather than midfield leaders.

We need Thomas Partey to be the £50m Thomas Partey, and quickly. Perhaps using the price-tag is a bit reductive, but that’s one measure of how expectations are placed on footballers. Ask £72m Nicolas Pepe, or Theo Walcott when he engineered a situation which made him the highest paid player at the club back in the day. We signed a 27 year old ‘oven ready’ player last year, and because of this shift in strategy with regard to signings and the age profile of the squad, that puts a bigger onus on him to contribute.

Before he leaves for AFCON, we have Premier League games against Newcastle, Man Utd, Everton, Southampton, Leeds, West Ham, Norwich and Wolves* (he may miss this due to the teams being gathered). It’s not all on him, obviously, and I think a recall for Martin Odegaard would be beneficial to his game, but if he’s fit – and 100% fit at that – I hope we can see performances from Thomas Partey that make us a little more whelmed about him. I believe he has the quality, but can he deliver? Fingers crossed.

A couple of quick things to finish today. It might still be too early for some people to think about Christmas and all that, but if you’re looking to do some shopping online and you want to keep things red and white, check out Arsebiz.

It’s a directory of Arsenal fan owned businesses, services, artists, creators and loads more so maybe have a quick check around to see if there’s anyone doing or making the stuff you’re looking for. It’s all categorised and you could help out fellow Gooners rather than give money to a tax dodging billionaire who built a spaceship in the shape of a mickey.

Also, we have a 10% discount on prints from our old friend Matthew Wood whose stuff is really lovely, as you can see below. Visit here, the discount is already applied. 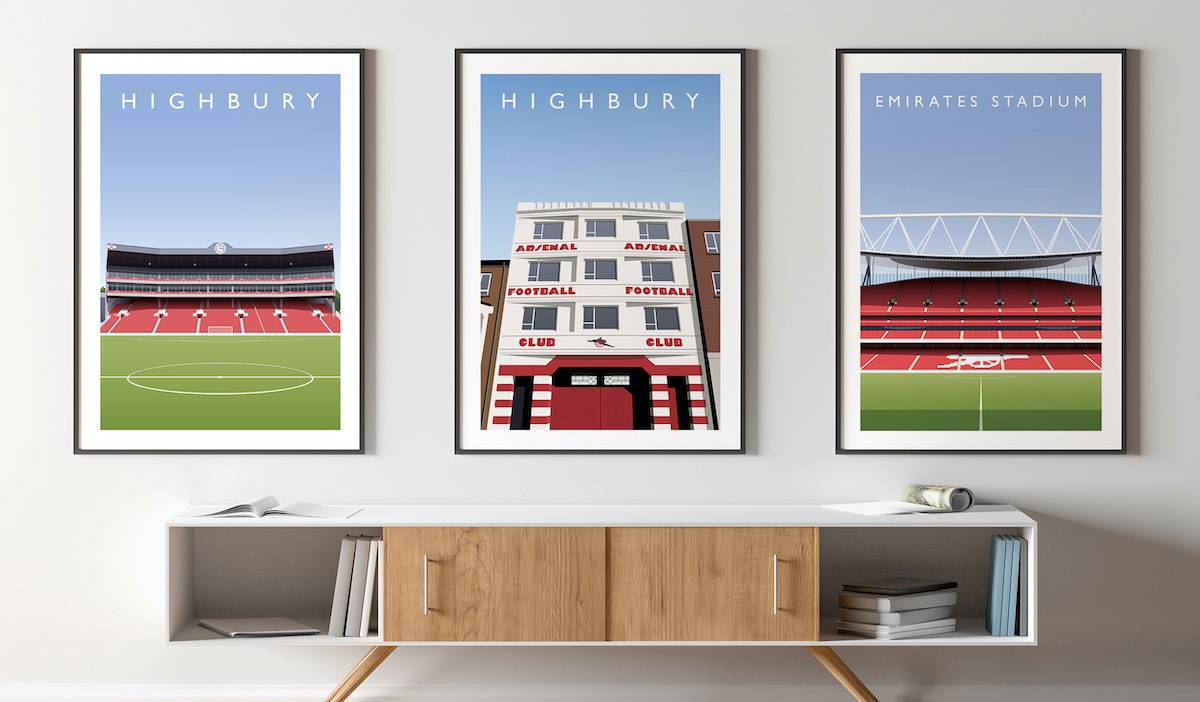 More here tomorrow, until then take it easy.

Previous articleArsecast Extra Episode 443 – 22.11.2021
Next articleOdegaard has to do more, but it’s time to give him the chance