“Claiming crosses is something that I like to do. With my height and my timing, I felt I could have an effect on a game by doing that, just like with the through-balls and the ball over the top. It is a chance to win possession back for the team and turn defence into attack.”

Burnley’s Nick Pope has spoken openly about preferring to claim crosses than the arguably “less risky” options of punching the ball clear or staying on your line. His opposite number on Saturday, Aaron Ramsdale, appears to agree.

Three games into his Arsenal career, Ramsdale is yet to concede a goal for the club and gave an impressive display in the 1-0 win over Burnley, winning the club’s man of the match award despite making just three saves, and three pretty standard saves at that.

The 23-year-old will have much tougher and much busier games than he did at Turf Moor on Saturday but his performance was very encouraging nonetheless.

We think of shot-stopping when we talk about goalkeepers for obvious reasons but there’s a lot more to the position than just that and Ramsdale has shown early signs of being very good on the ball for Arsenal and very good at stopping problems before they arise.

The technique he claimed long, direct balls into the area with was perfect. There was no danger of him suffering an injury like Bernd Leno did when Neal Maupay collided with him in midair at Brighton in 2020; Ramsdale saw off any threat of contact from an onrushing forward by collecting the ball with either his knee or, more noticeably, his leg high and extended. No striker will be in a hurry to run into him when he’s holding that Air Jordan pose. 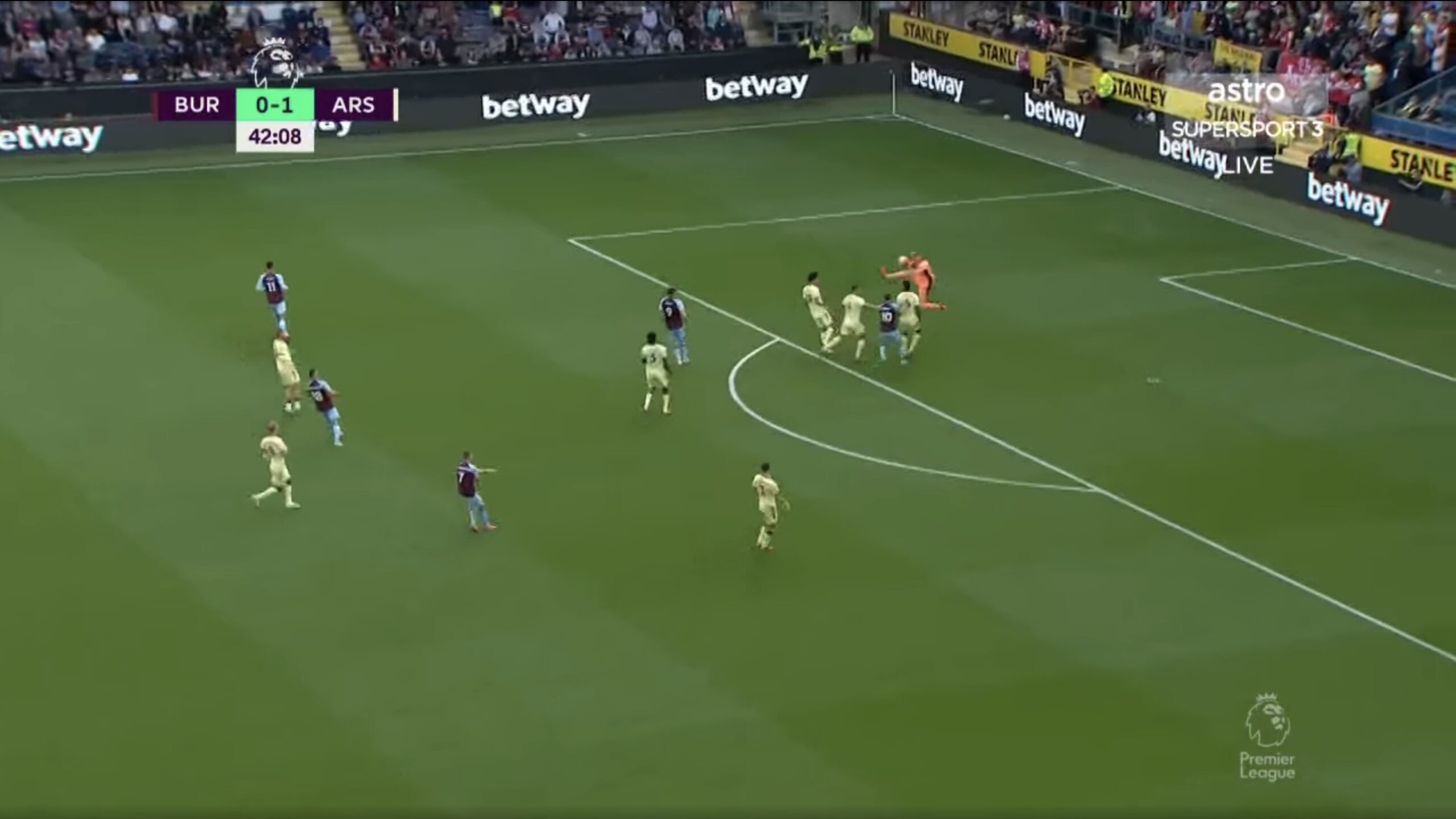 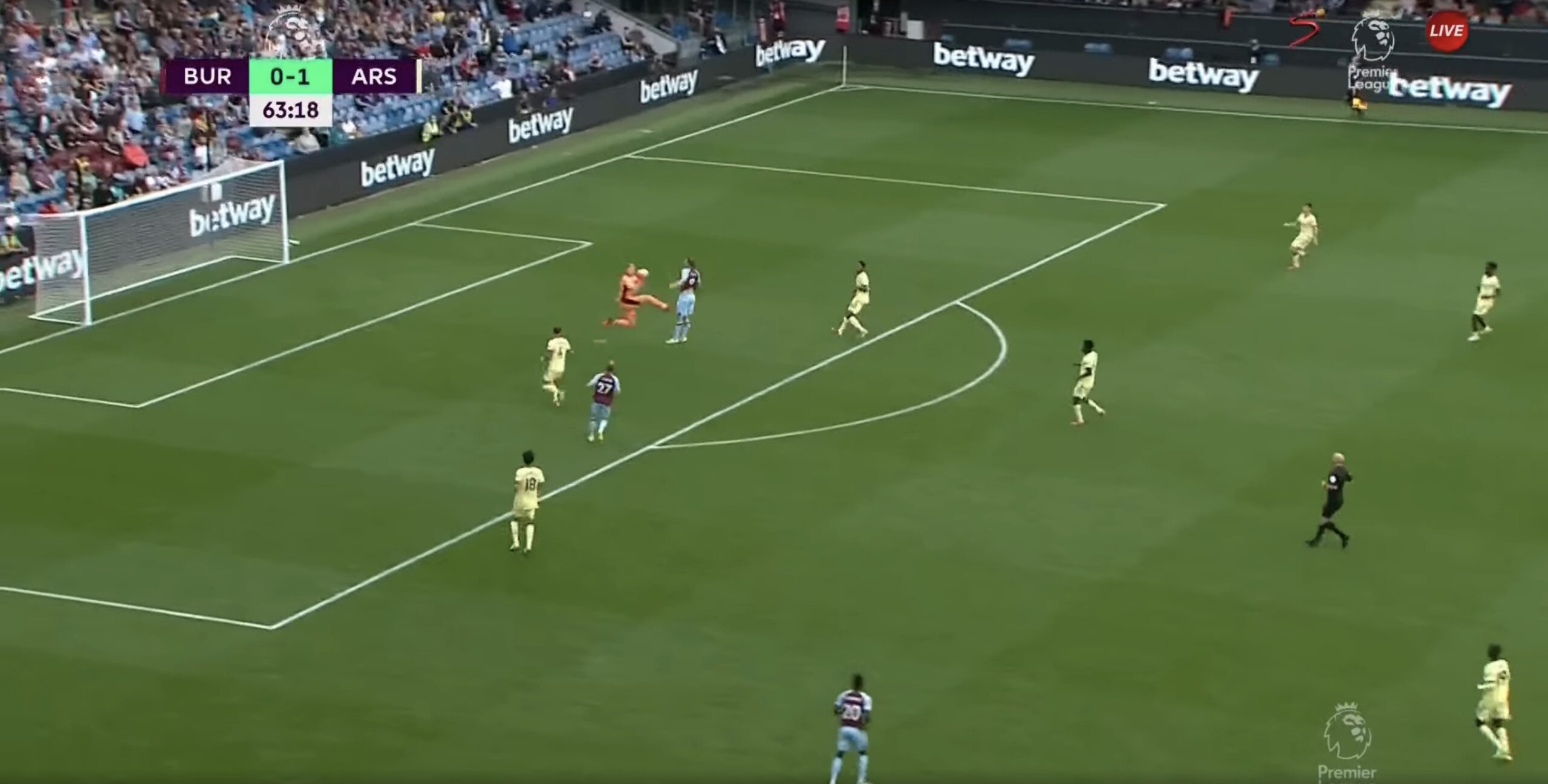 It looks like a minor detail but it’s a potential issue avoided with a proactive approach. The can be said of the way he came to claim crosses that, truthfully, posed little threat. Even poorly delivered balls without a forward under them can lead to issues when defenders fail to clear their lines properly.

Over the course of the game, Ramsdale, per Whoscored (data from Opta) claimed four crosses. Opta data seemingly not including the examples above, more from long balls than balls crossed into the area, but four is still a fair number. It’s more than any Arsenal goalkeeper, also per Opta, has made in any single Premier League game in any of the last two seasons. That streak may well go back longer than the previous 80 league games, which is all I looked through, back to the start of 2019/20.

One goalkeeper who did make as many claims in a game for Arsenal was Wojciech Szczesny in the 2015 FA Cup Final. I had hoped to find a video of his performance, which was excellent yet understated. The final ended in a comfortable win but the build-up had centred on how Arsenal would deal with the threat Christian Benteke posed in the air. Szczesny made it a non-issue by commanding his box, which is why I looked back for the game specifically; Ramsdale’s performance was reminiscent of that.

The new goalkeeper didn’t just claim balls to prevent immediate danger but also to make sure, on a few occasions, that there was no room for a mishit or misjudged clearance, or miscommunication between defenders, leaving his six yard box to collect the ball and diffuse situations. Again, this isn’t technically impressive, but a sign of confident decision making. An assertive approach to goalkeeping that Arsenal have lacked. Ramsdale had command of his area and prevented problems from arising, rather than needing to deal with them when they did. 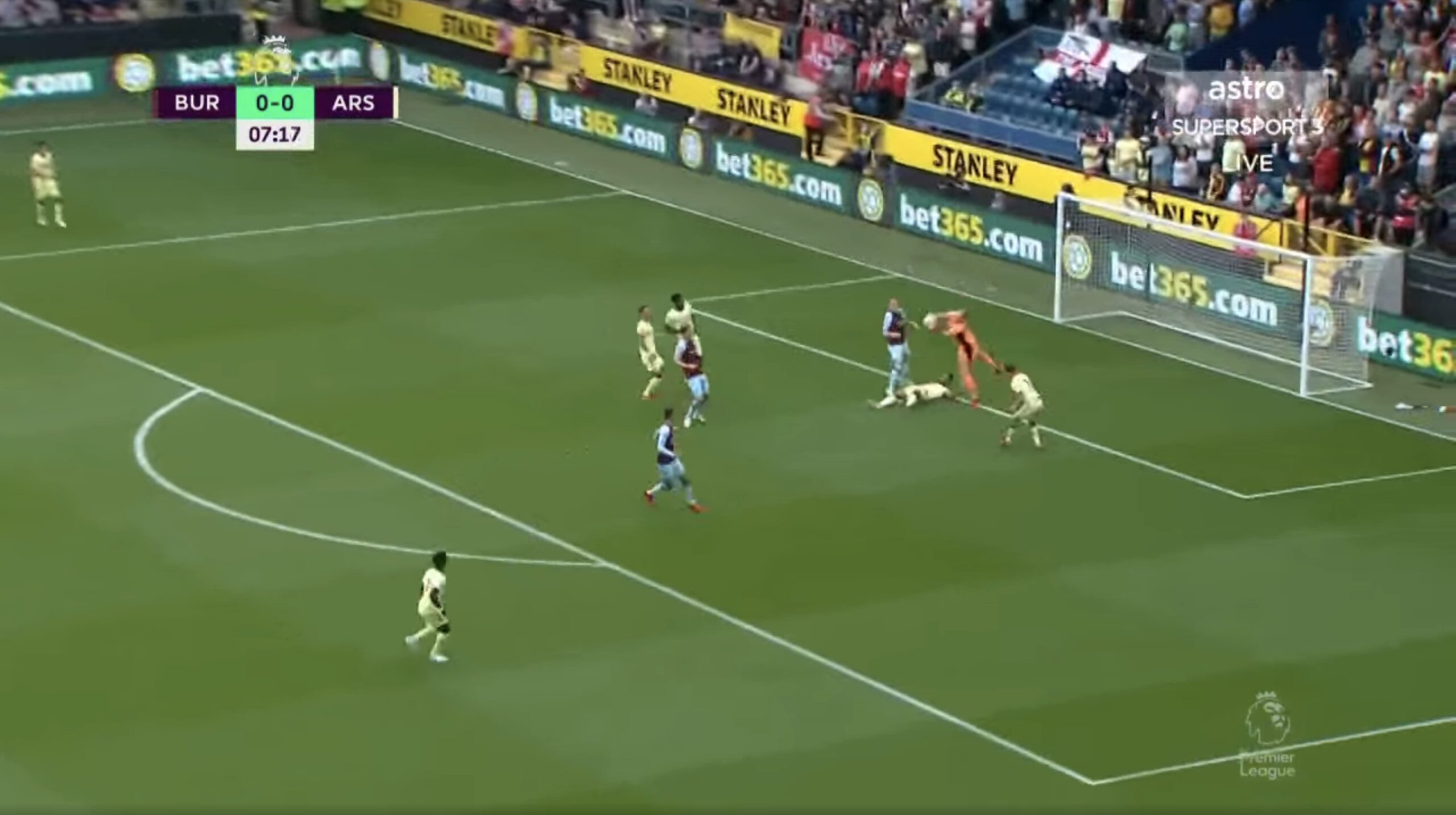 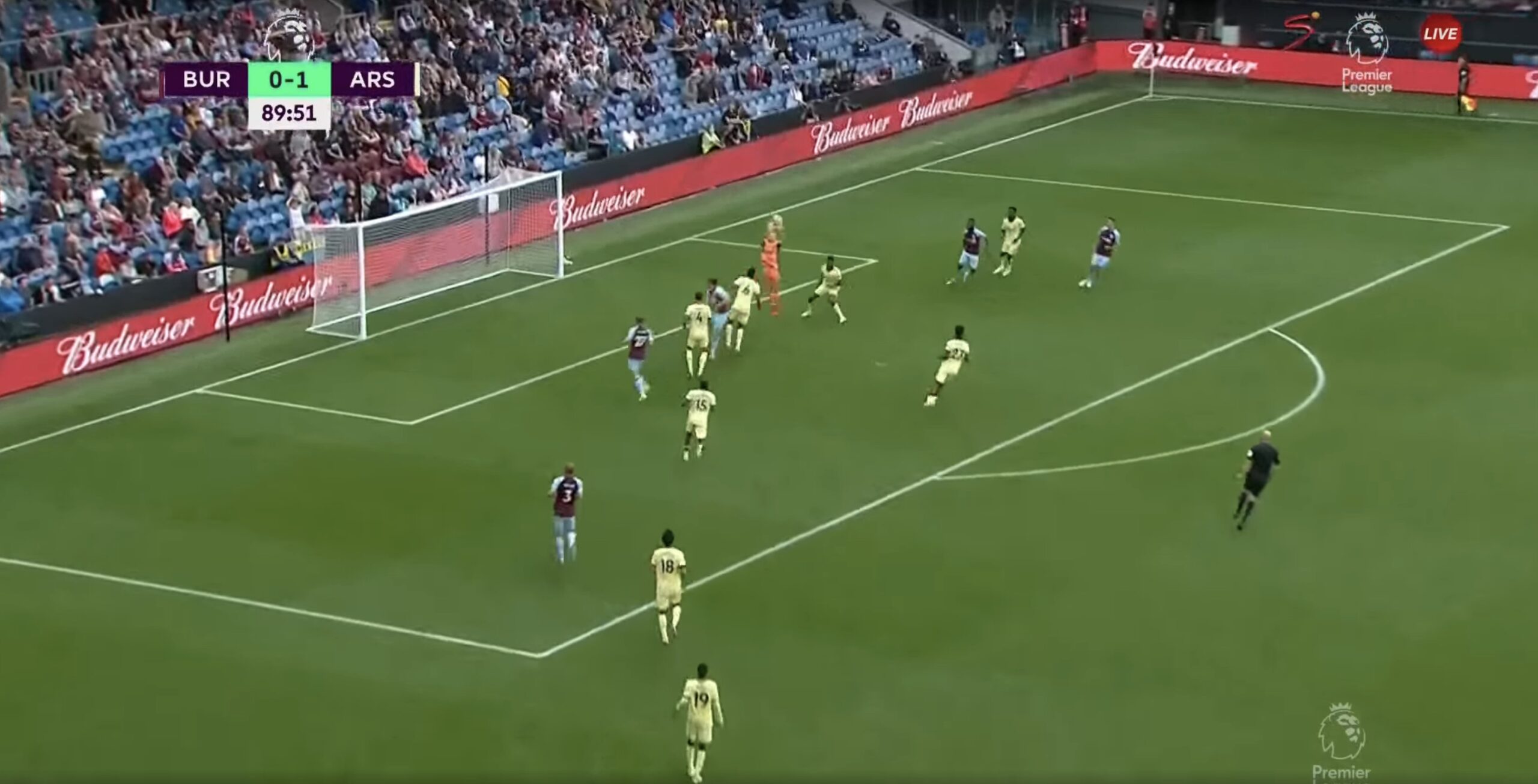 And he was excellent in getting under the ball and claiming corners under pressure as Arsenal protected their lead. 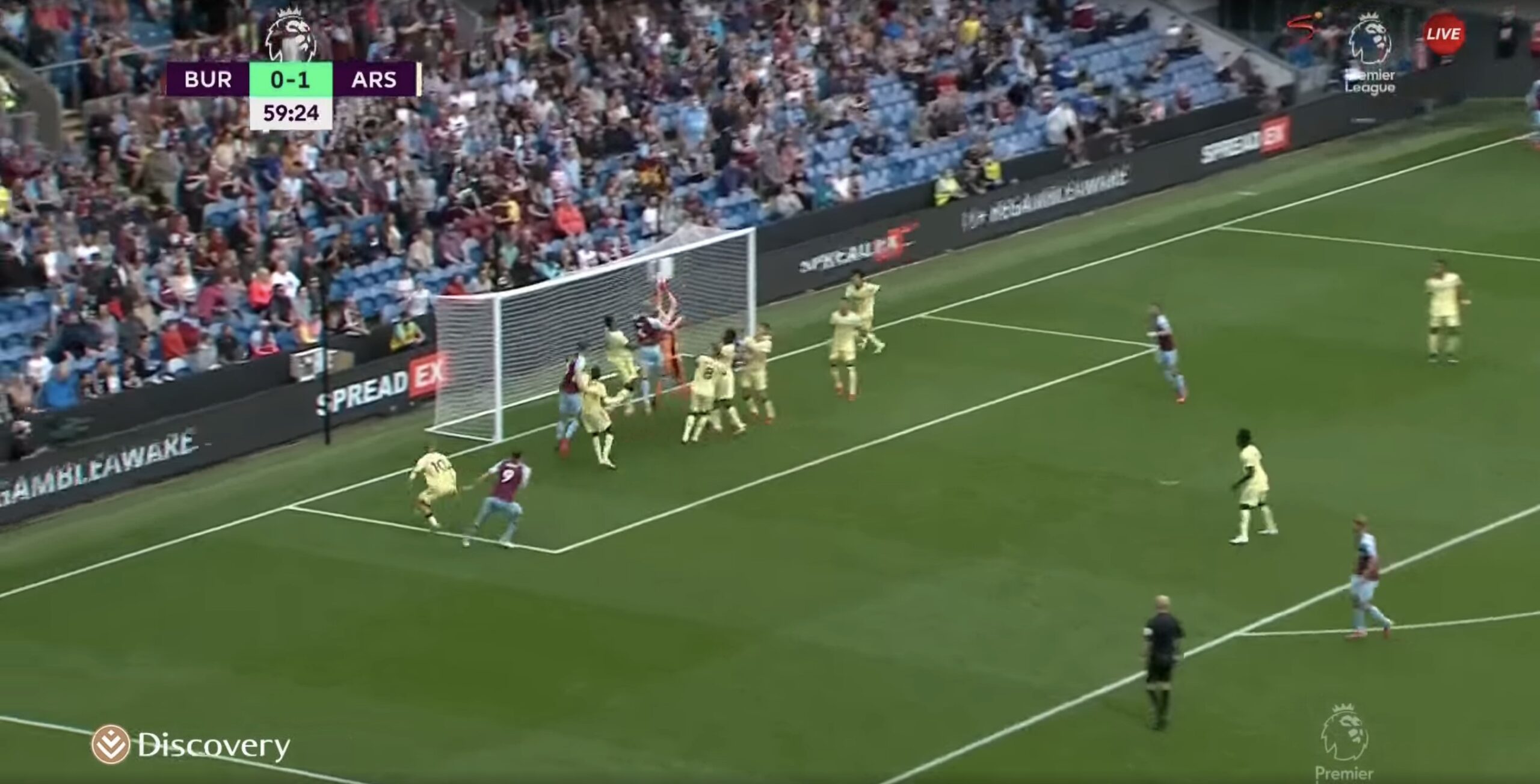 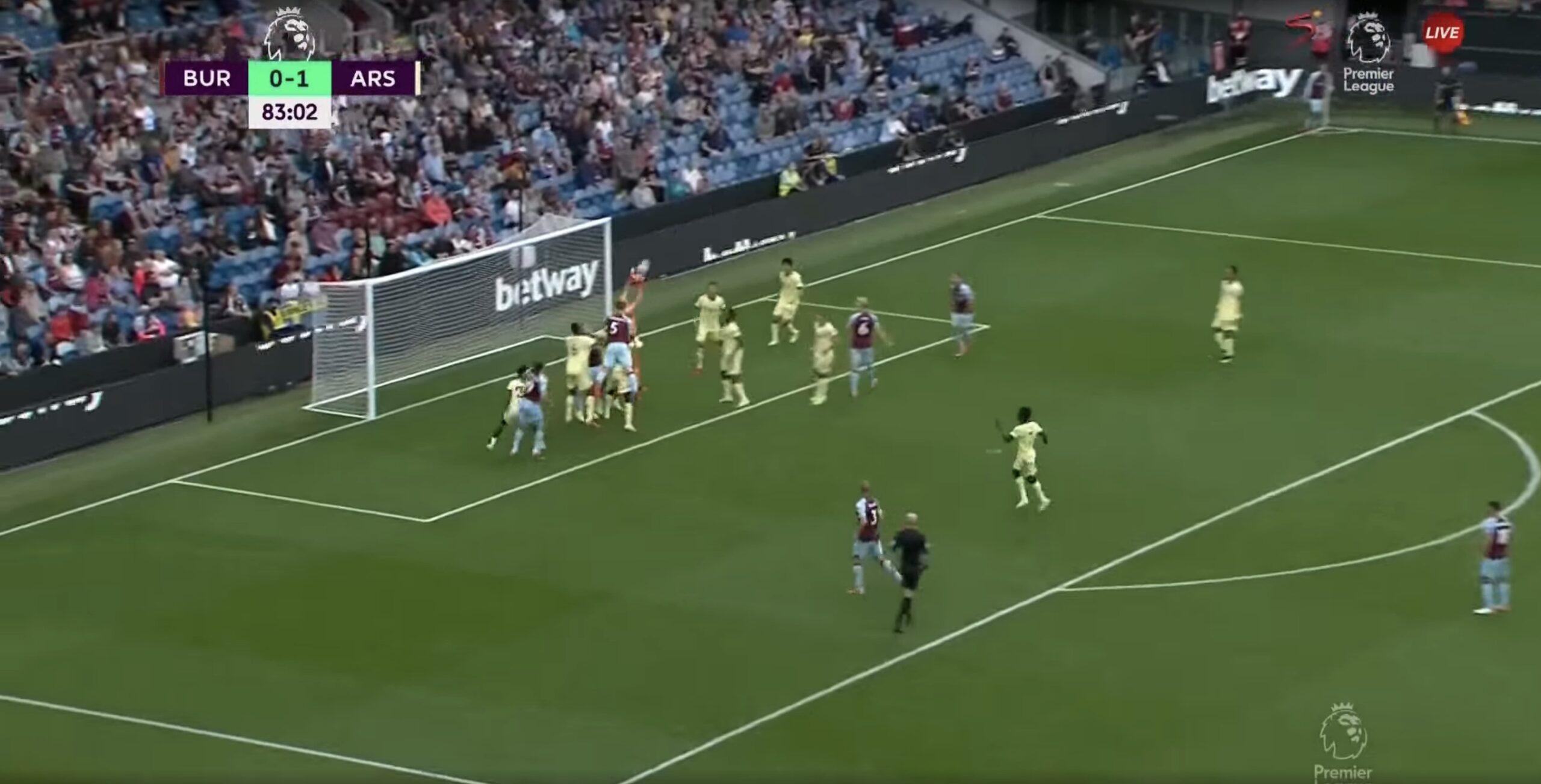 Again, it really isn’t something spectacular, but it takes pressure off of the defence in a way Leno has not consistently been able to do.

Ramsdale was also excellent with the ball. In total, passes played by the goalkeeper took Arsenal 663 yards upfield at Burnley on Saturday (per StatsBomb via FBRef). That figure eclipses the amount Bernd Leno managed to get Arsenal upfield in any of his last 68 appearances since the start of the 2019/20 season. And it wasn’t a one-off. Ramsdale’s 457 progressive yards against Norwich, in his league debut for the club, is bettered in just six of those last 68 Leno starts.

Everyone wants a goalkeeper to save shots first and foremost, and having one who claims crosses is also a great thing to have, but Arsenal want to play out from the back and need a goalkeeper who does so confidently. Ramsdale had one mishap where he took too long and was shutdown but was otherwise exemplary with the ball in just his third appearance for the club. He dragged the Burnley press towards him over and over before looking for a pass into midfield, not a sideways ball to one of his defenders, where they could be pressed, playing the ball forward whenever possible. 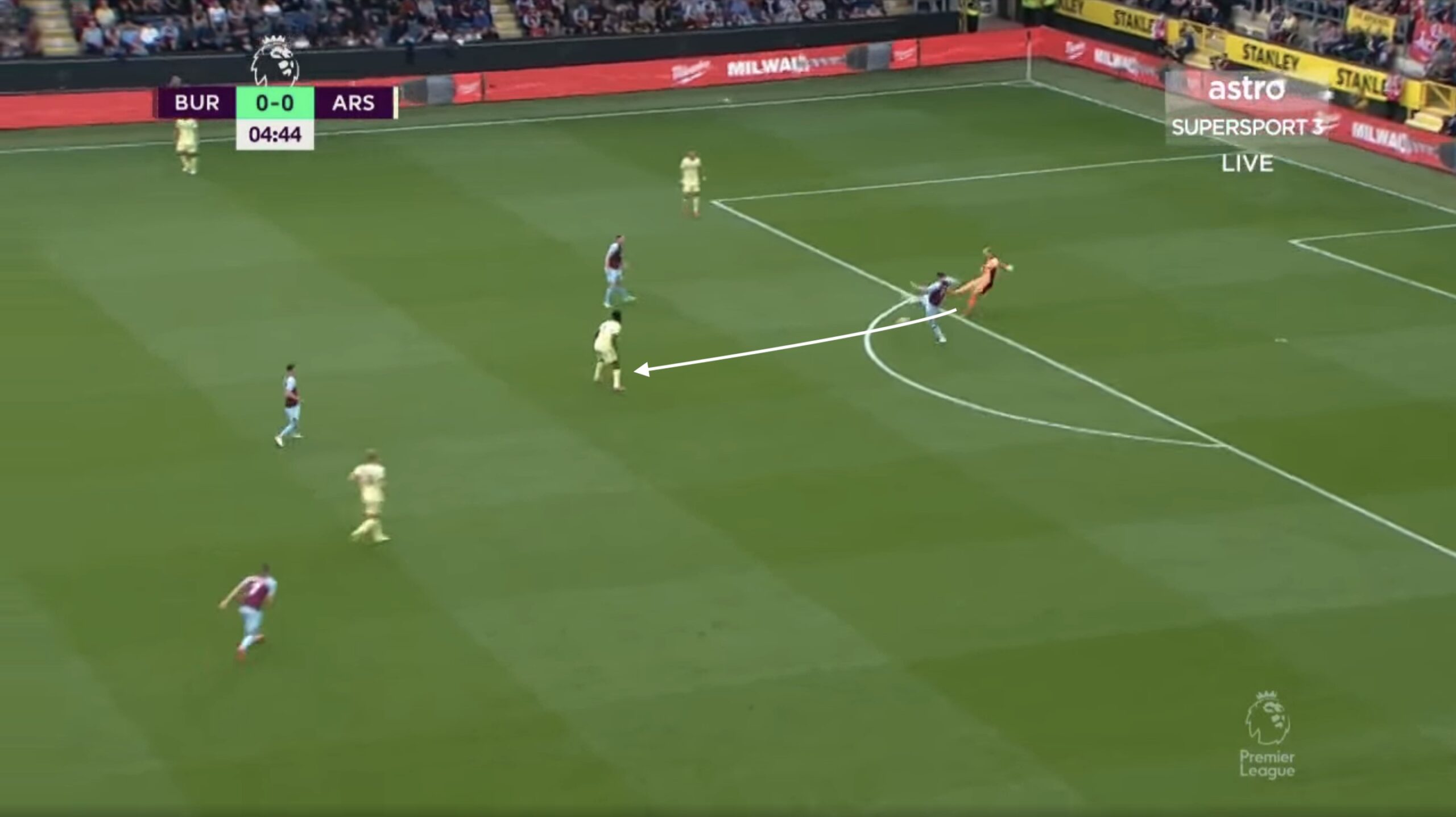 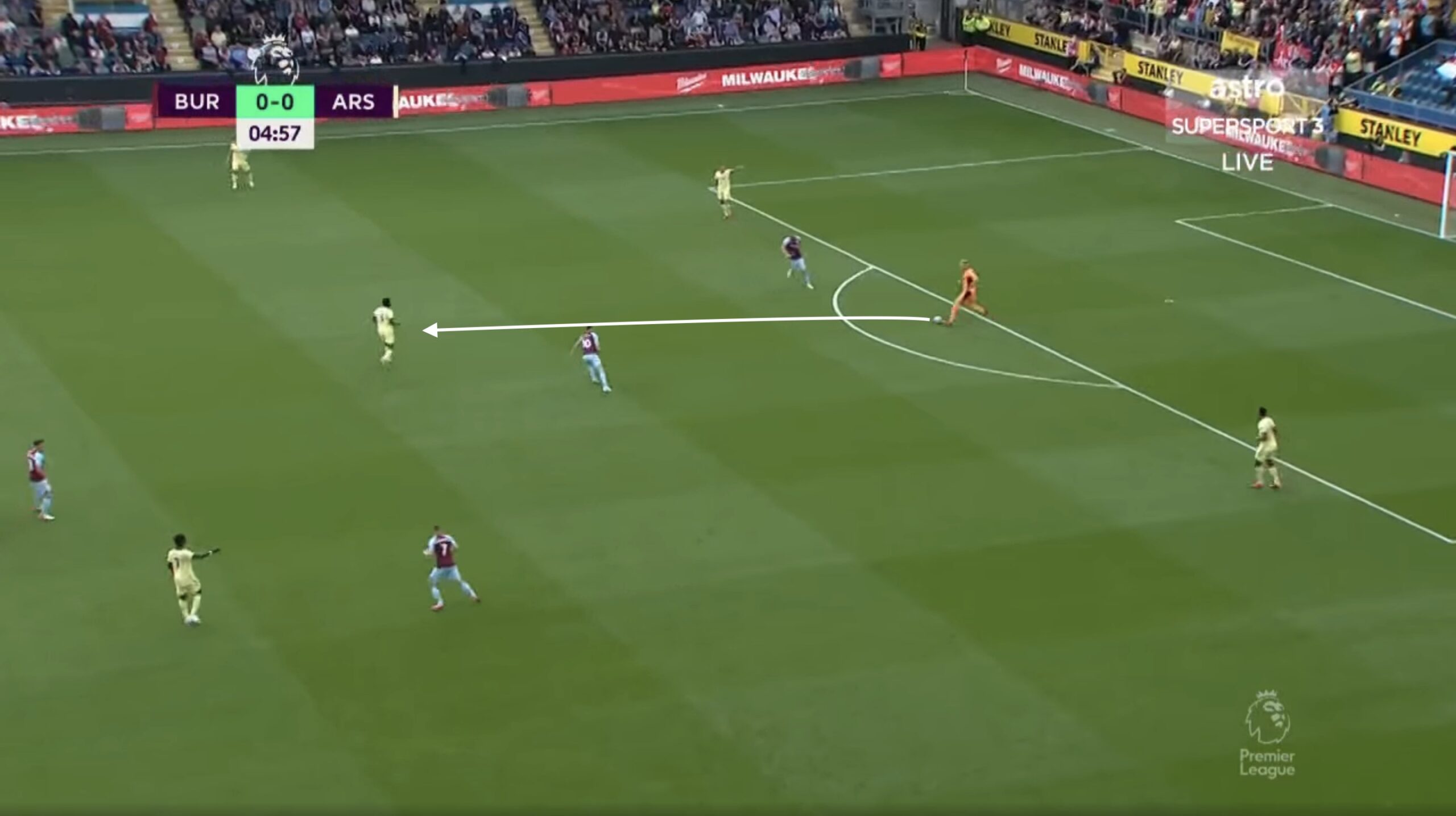 The sideways pass to the centre-back is obviously safer in some scenarios and we see it from goalkeepers constantly but Thomas Partey and Martin Odegaard received possession from their goalkeeper seven times (combined) in the first half at Burnley, just two occasions fewer than the centre-back pairing of Ben White and Gabriel.

The next example was particularly pleasing. We so often talk about teams making the pitch big by running in behind to stretch teams or staying as wide as possible but our end of the pitch is also space we can use to drag teams towards us and open up the spaces to play through them.

With the ball in his hands, Ramsdale has no simple option. The centre-backs aren’t in areas to safely receive the ball with time, the midfielders are covered. Partey is pointing to the left. He doesn’t want the ball. So Ramsdale retreats before dropping the ball to play out with his feet. 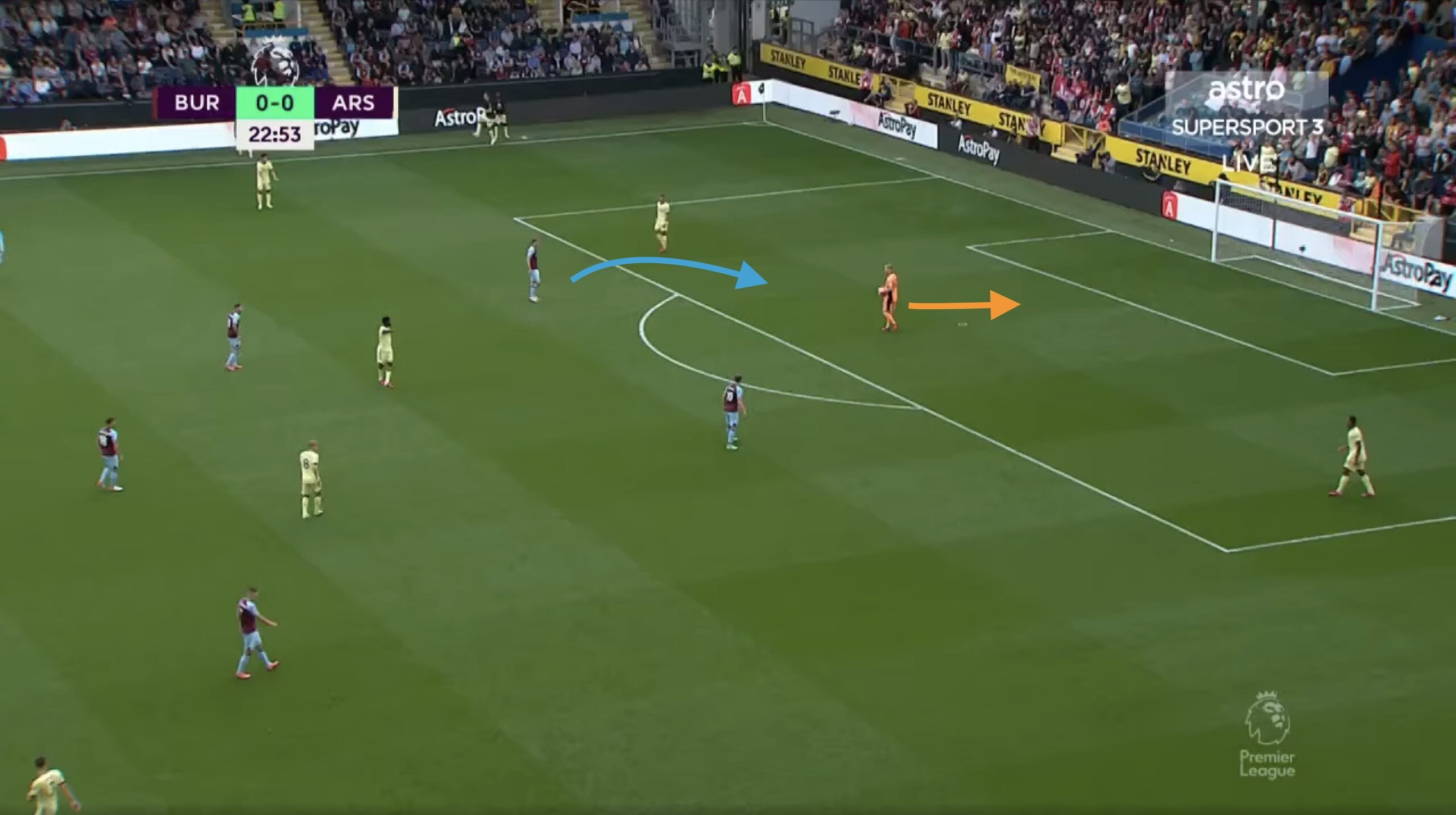 Those few steps force Chris Wood wider to cover Ben White and it gives Partey a space between Burnley’s forwards and their midfield. The Ghanaian drops in and Ramsdale feeds him and tells him exactly where the ball should go next. 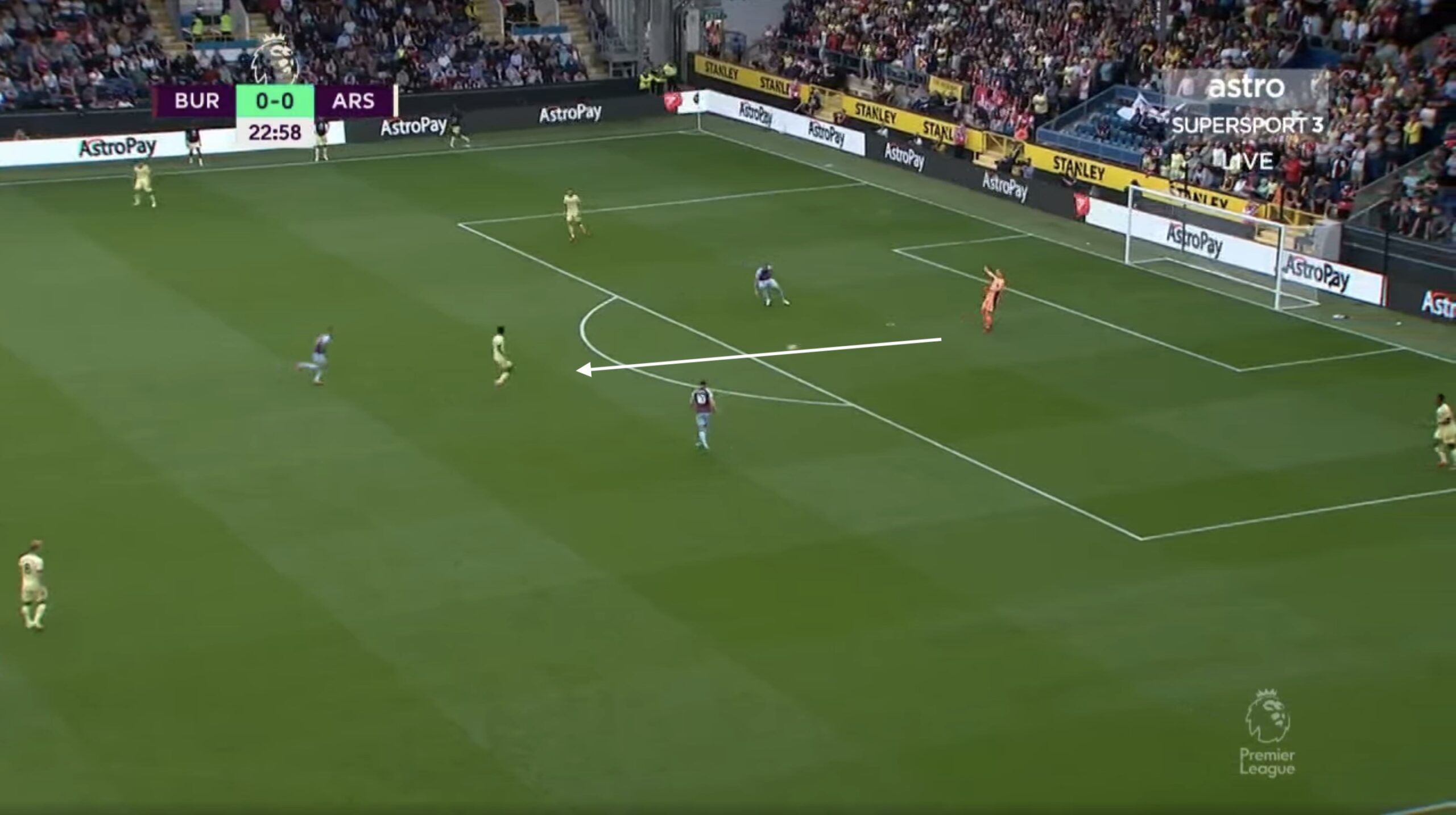 The point telling Partey where the ball should go next also looks so obvious but that doesn’t mean it always happens. Look back at Granit Xhaka’s awful error at Turf Moor last season and you’ll see Bernd Leno fail to communicate with him at all. At the time, many split the blame between the pair; Xhaka screws up and makes an error he shouldn’t make but Leno puts him in a poor position to begin with and offers no advice on where the ball should go next.

Ramsdale knows playing this way is hard and requires constant communication, plus he has the best view of anyone on the pitch. It’s nice to see him playing the pass with the next one in mind, and then telling the recipient, usually under pressure and facing the Arsenal goal, where that next pass is or which direction to turn. 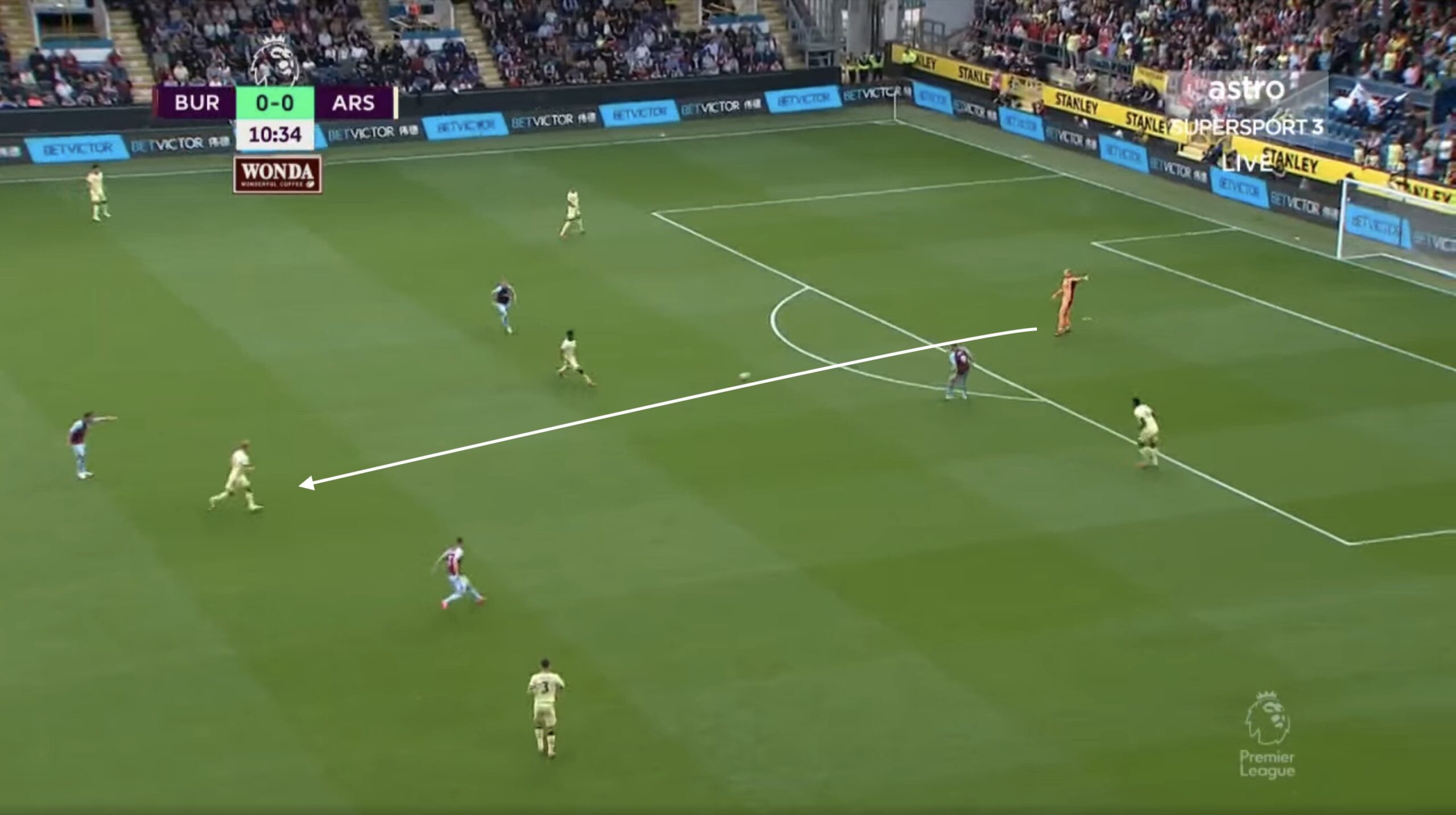 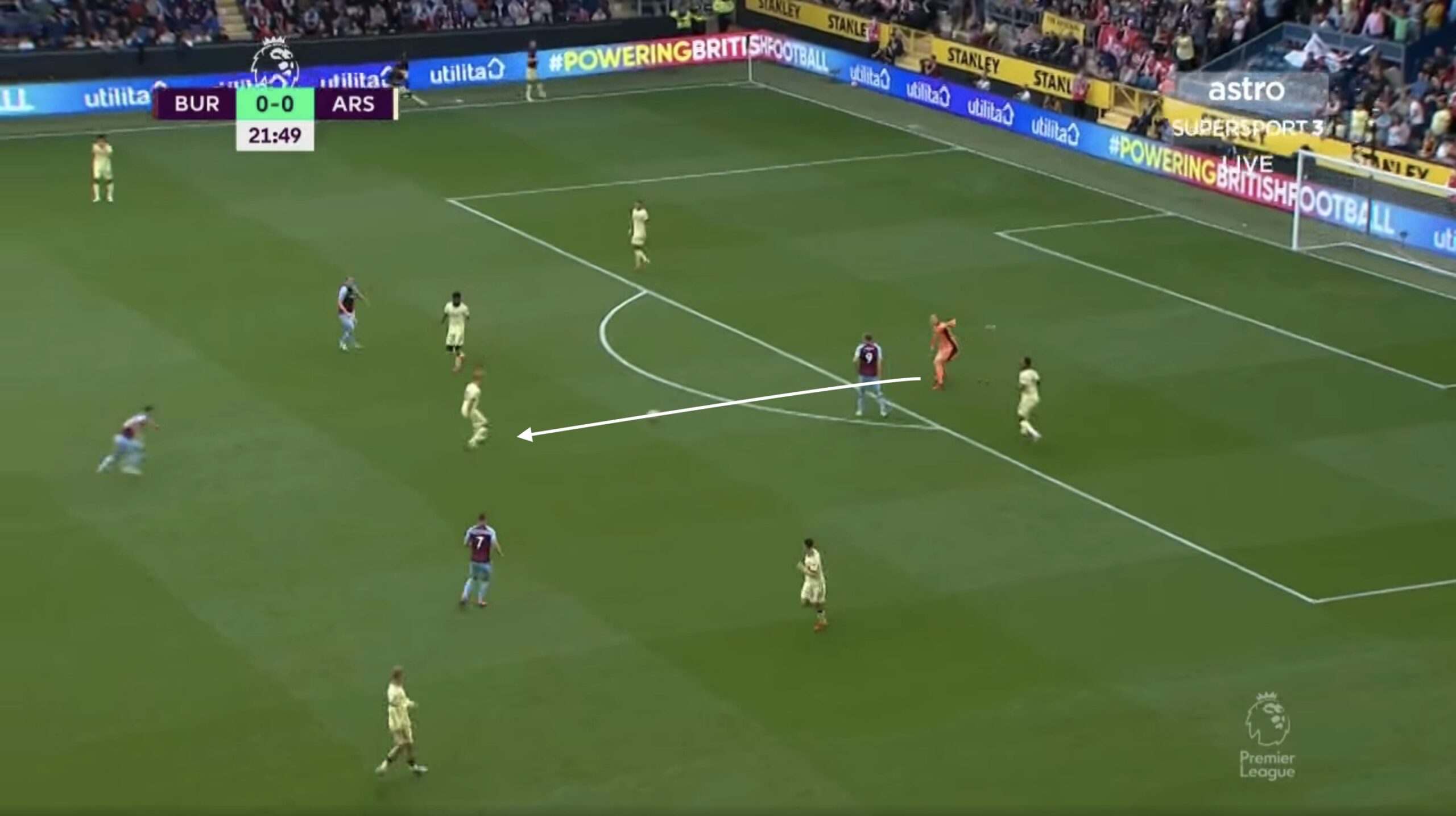 Of course it looks easy, it looks obvious, and he isn’t reinventing the game. But that doesn’t mean it isn’t welcome.

Back to more traditional goalkeeping and Ramsdale dealt with the game’s potential turning point excellently. Ben White’s slack pass meant a chance for Matej Vydra but Ramsdale was instantly alert to the situation, reacting and racing out to close Vydra down instantly. 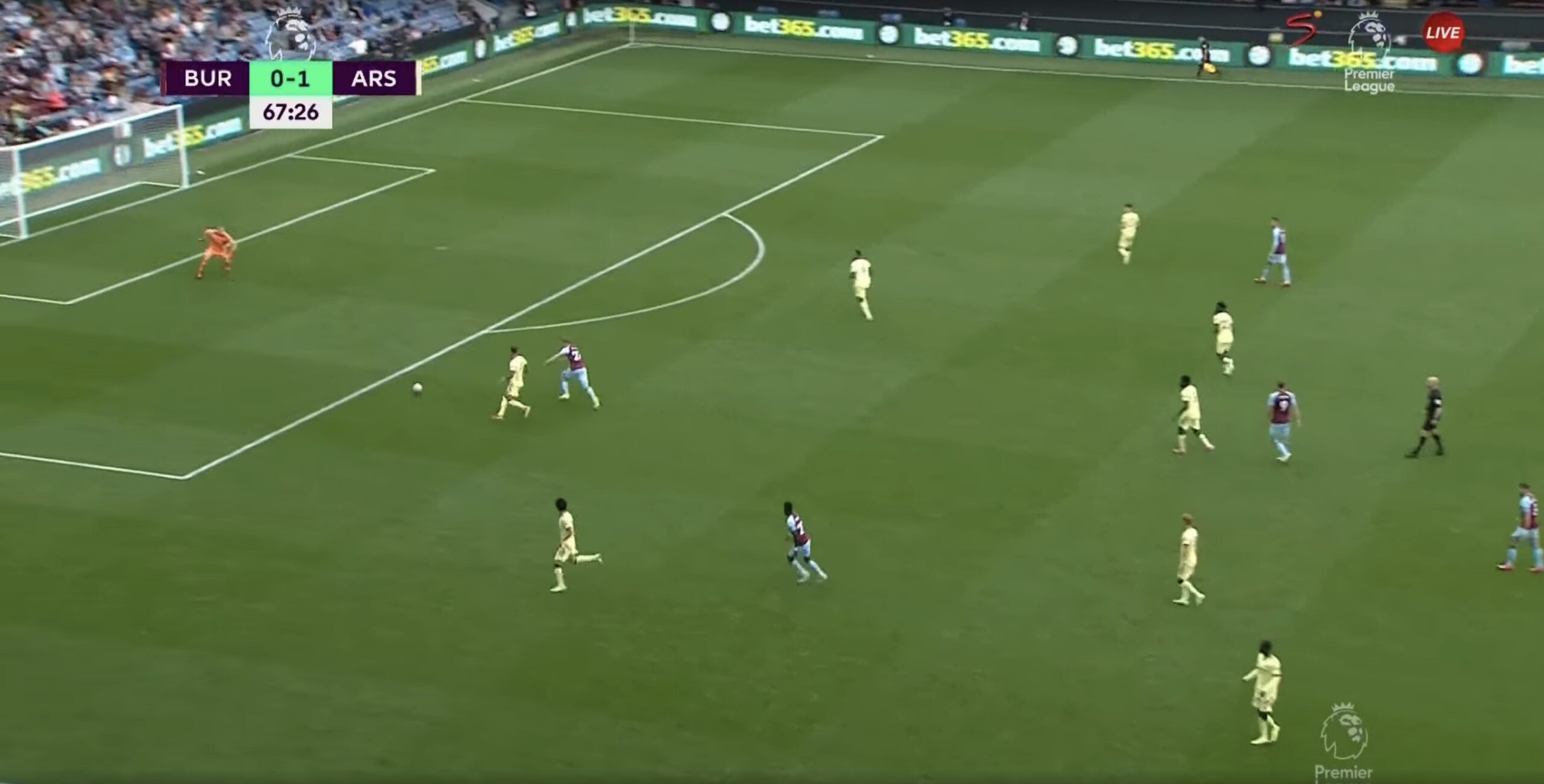 From there he did everything right. He closed the angle for Vydra so a first time finish wasn’t possible and the striker had to go wide. He took small steps, meaning he had as many opportunities as possible to react to Vydra’s first touch and could commit as late as possible. And when he did commit to a challenge, he didn’t lunge with his hands but with  his feet, in full control of his body. 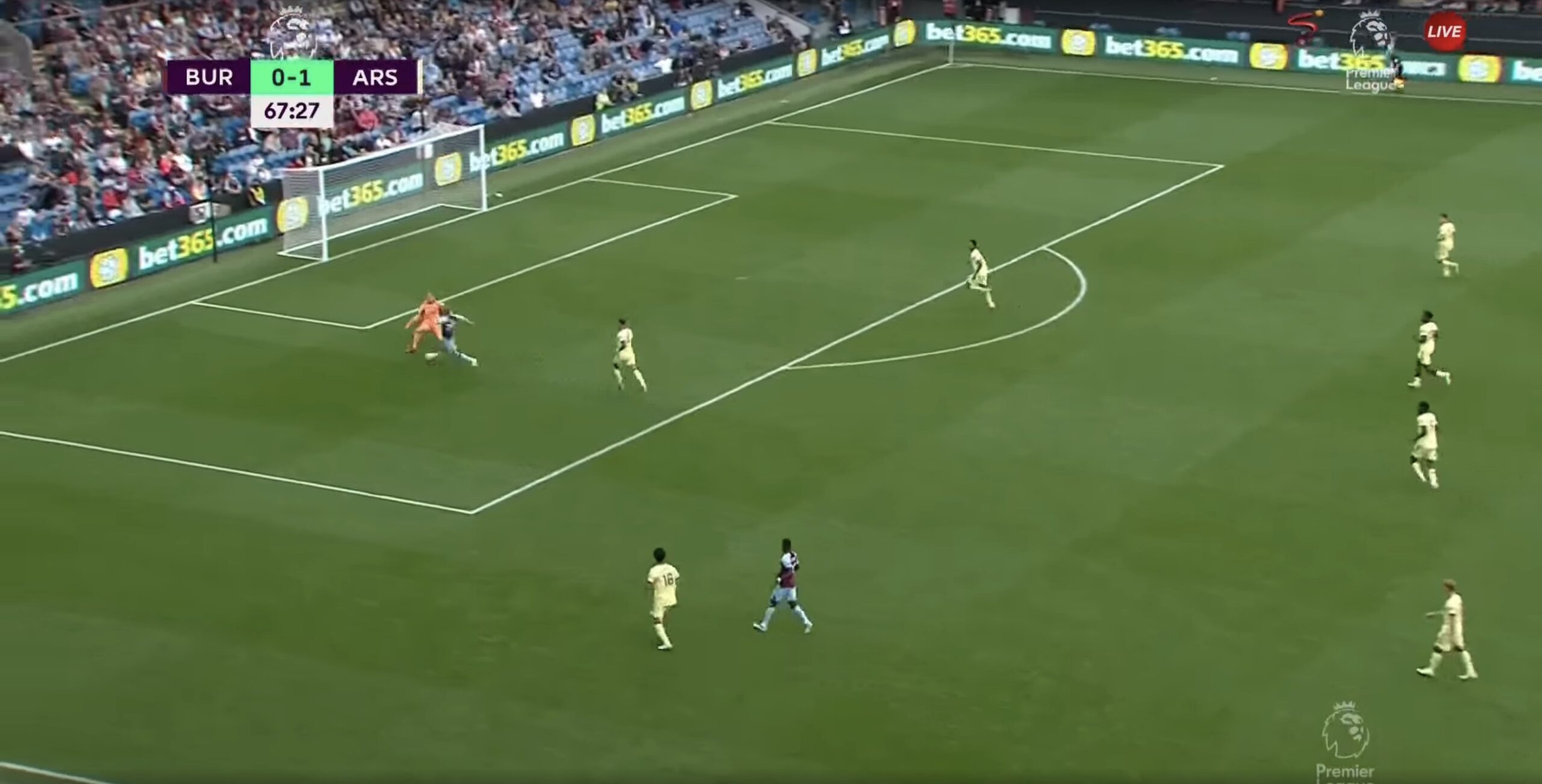 Was there an element of luck? Of course there was. If White’s pass was even softer, or Vydra was a little quicker, Arsenal would have been in even bigger trouble, but that doesn’t mean Ramsdale didn’t deal with the situation superbly.

The signing of the goalkeeper was criticised by many and bigger tests are around the corner but performances like this will quickly win fans over. He’s already appears to be the Arsenal number one and this was a very encouraging performance that showed just how proficient Ramsdale can be at those goalkeeping things that aren’t making saves.